Heartbreaking footage shows the speed at which a kitchen fire quickly rose up the 25 floors of Grenfell Tower aided by flammable cladding.

The inquiry into the disaster was today shown a montage of videos filmed by witnesses which show the flames leaping up the building in less than 20 minutes.

The assembled footage showed how the spread of the blaze started with flames coming out of the window of flat 16, where the fire began.

But within minutes, the flammable window frames and polyethylene cladding meant the flames had risen to the top of the building, as devastated bystanders looked on helplessly. 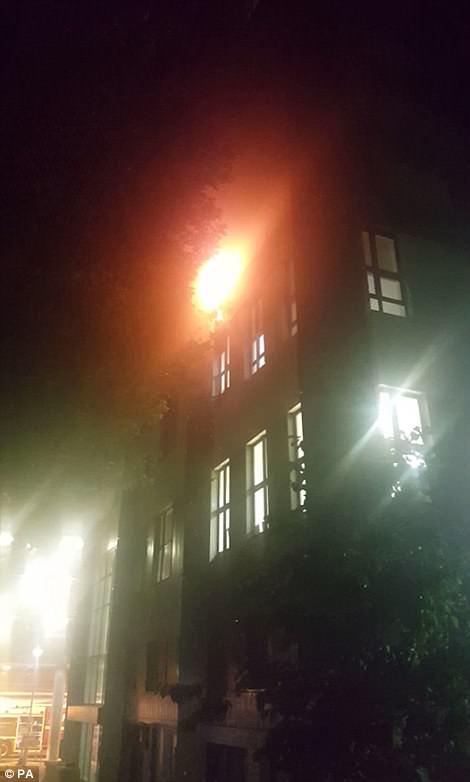 Shocking footage shows how a fire which started in a kitchen of a Grenfell Tower flat lept up the side of the building. The left hand image is timed at 1.08am, not long after the blaze began. By 1.12am the fire had already started to grow

In clips estimated to have been filmed between 1.16 and 1.20am, burning debris could be seen falling from the tower, and screaming could be heard.

‘I told you, I told you get out,’ one man could be heard shouting in a further clip.

Six clips showing the side of the tower as it became engulfed with flames were shown side by side.

‘Oh my god,’ one woman said as huge pieces of fiery debris rained down from the blazing tower.

Another could be heard sobbing as it became apparent the fire was out of control.

After the video was shown, chairman Sir Martin Moore-Bick said: ‘It is truly shocking, every time you see it, it strikes you in a very similar way, very strongly.’

The hearing was also played the audio of the first 999 call made on the night, by the tenant of flat 16 – where the fire started – Behailu Kebede, at 12.54am.

In it he told the operator: ‘Quick, quick, quick. It’s burning.’ 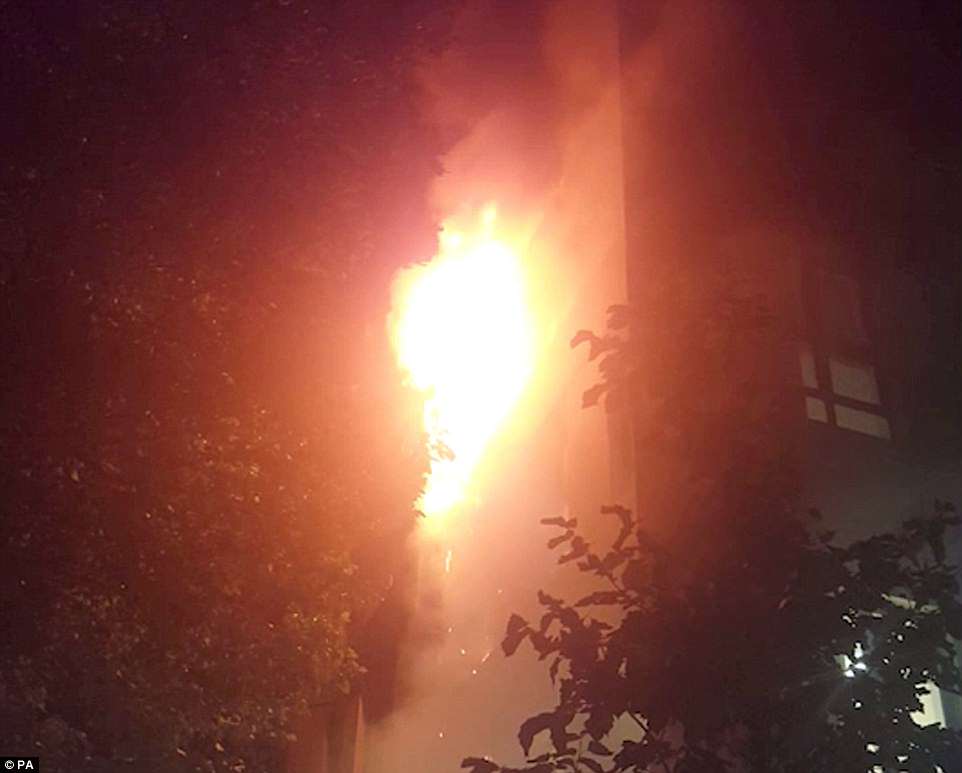 This image, timed at 1.15 am, shows how, helped by flammable cladding and window materials, the fire began to grow 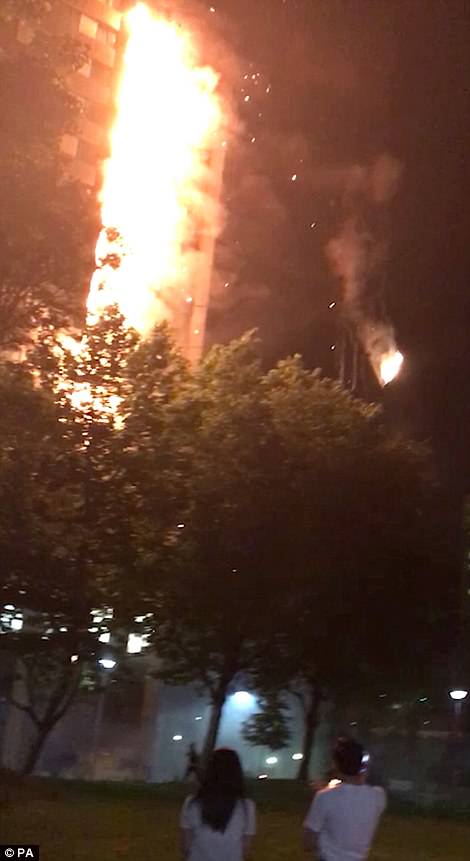 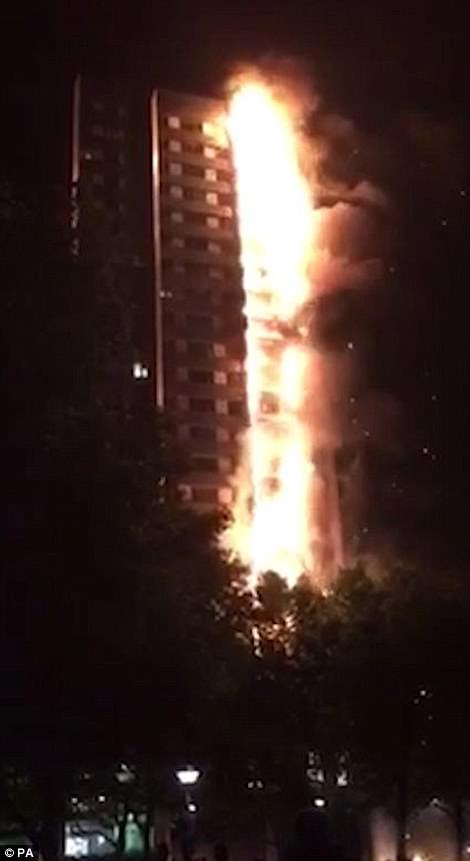 By 1:24am (left), the flames were burning through flats on multiple floors. An image taken from footage filmed around 1.28am (right) shows how, aided by what a report called ‘multiple catastrophic fire-spread routes’, the fire reached the top

The footage was played on a day in which a series of five reports by fire experts laid bare the multiple failures in refurbishment work and in fire safety procedures. Dr Barbara Lane, an expert commissioned by the Grenfell Tower inquiry, delivered an excoriating assessment of the refurbishment which finished a year before the fire.

The rainscreen cladding put on the building used material that did not meet fire safety standards, while the system as a whole was not capable of effectively preventing the inferno spreading.

In a report published on Monday, Dr Lane wrote: ‘There were multiple catastrophic fire-spread routes created by the construction form and construction detailing.’

Windows in individual flats had no fire barriers encasing them and these openings were surrounded by combustible material, the expert found.

Such a shortcoming ‘increased the likelihood of that fire breaking into the large cavities contained within the cladding system’ and provided ‘no means to control the spread of fire and smoke’.

The gap beyond the window, in turn, was supposed to have fire-stops at intervals which would halt the advance of flames – but these were installed incorrectly.

There was also no evidence they had ever been tested for performance in the cladding system. 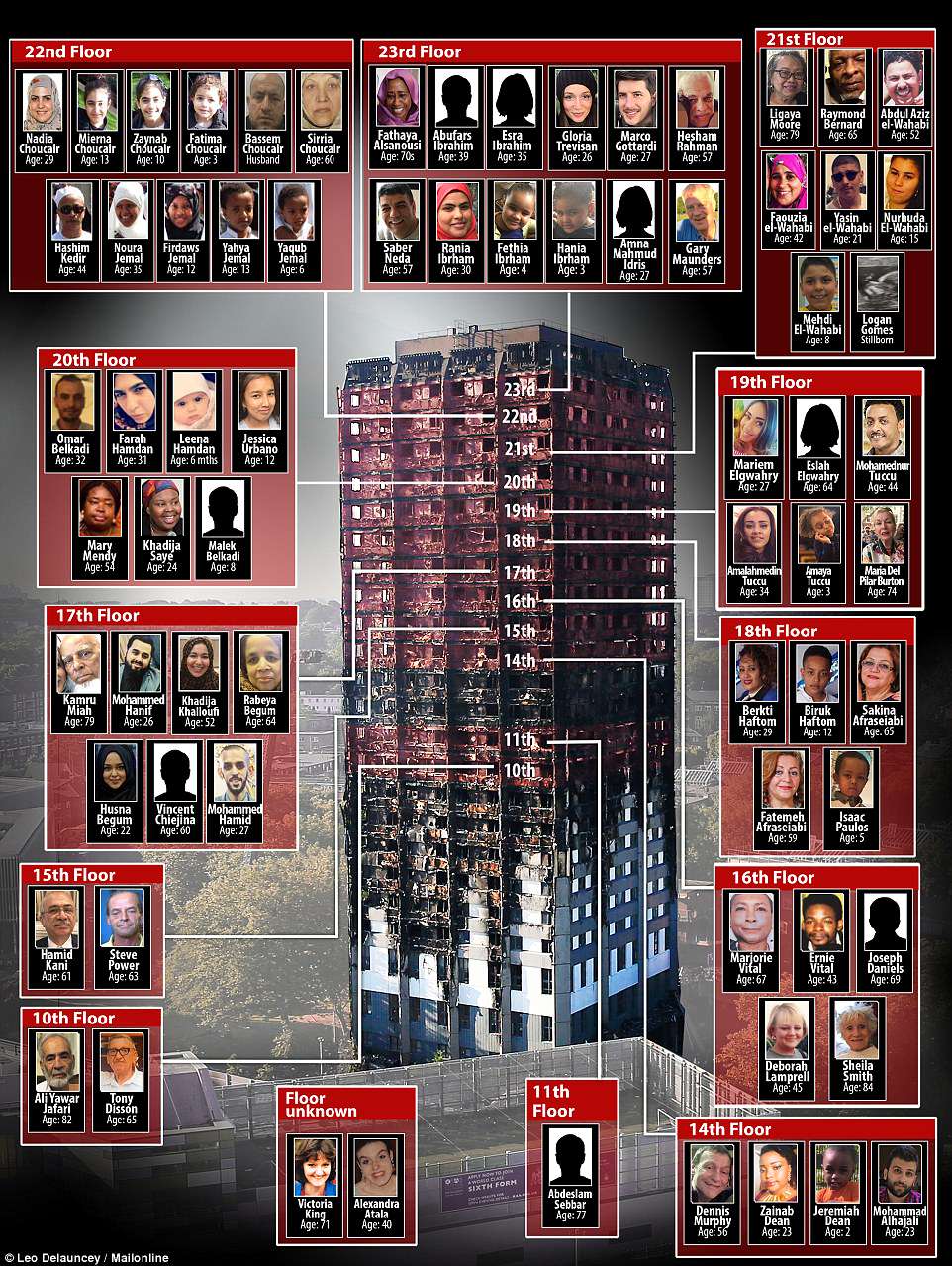