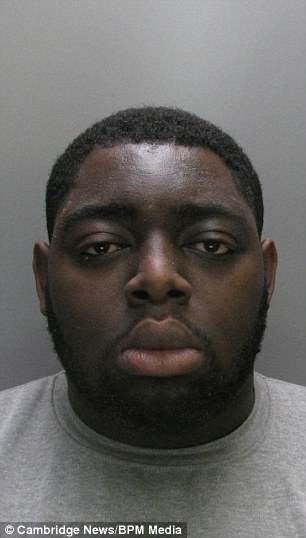 Isaiah Eghobamien zoomed through the dark, leading police in the pursuit as he hit speeds of more than 115mph in a bid to escape

Dramatic footage shows a police helicopter and cars in a high speed chase with a dangerous driver who skirted with an oncoming train.

Isaiah Eghobamien zoomed through the dark, leading police in the pursuit as he hit speeds of more than 115mph in a bid to escape.

The video shows Eghobamie, speeding before zigzagging through a level crossing, seconds before an oncoming train.

At one point the 20-year-old also drove the wrong way up a slip road on an A-road after he had overtaken an ambulance responding to an emergency call on April 25.

The police pursuit continued northbound on the A11, with Eghobamien’s vehicle reaching speeds of more than 115mph.

As he attempted to turn at more than 100mph, Eghobamien lost control of the vehicle and crashed, seriously injuring himself and five passengers.

He was arrested and pleaded guilty to dangerous driving on Wednesday, May 30 and was sentenced to spend a year in a young offenders institution.

He was also disqualified from driving for two years and ordered to take an extended driving test.

Sgt Mark Dollard said: ‘Eghobamien failed to stop for police and avoided a  serious rail collision by literally seconds. His driving was persistently dangerous, risking not only his life and the lives of his passengers, but other road users as well.

‘He is lucky to be alive and will now be able to reflect on his actions and serve as a warning to others that failing to stop for police can have serious consequences.’