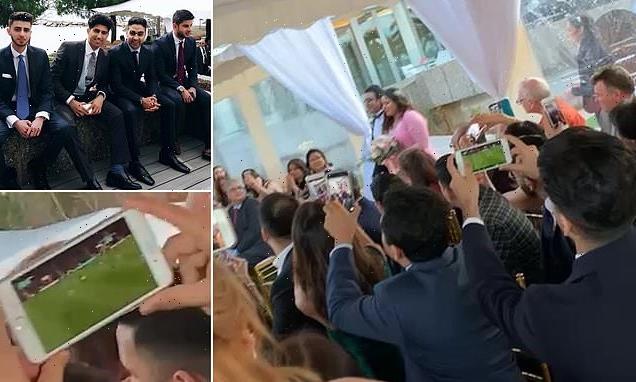 Perfect match! Football-mad wedding guest watches Newcastle game on his phone while pretending to film bride walking down the aisle

A ‘football-mad’ wedding guest has been hailed as a legend after he was caught streaming a Premier League match while his relative walked down the aisle.

‘Football-mad’ Fahill Sethi, 23, had joined his cousin Shiv Varma in Cyprus to watch their relative Sunaina Bayliss tie the knot.

Before the ceremony, the Newcastle United mad family were watching their club on Fahill’s phone when music started playing to signify the bride arriving.

Hilarious footage shows the rest of the guests pulling their phones out to capture photos and videos of the happy occasion, which Fahill appeared to follow.

Instead, the student continued streaming the match on his smartphone while following the bride’s path down the aisle.

Music producer Shiv, of Guildford, Surrey, explained the ‘football-mad family’, who originally hail from Kent, all saw the funny side of his cousins’ antics.

As music begins to play from the speakers, Sunaina excites the guests as she appears holding flowers and wearing a light pink dress.

While other guests break out into applause as the beautiful bride walks down the aisle, Fahill feigns his interest and instead watches the football match on his phone.

The chuckling cousins can be seen still streaming on Fahill’s phone as others take pictures and there are loud cheers from the crowd. 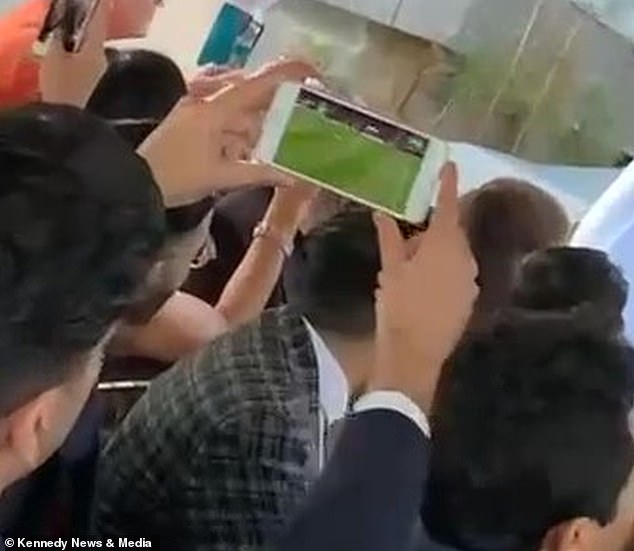 Fahill Sethi, 23, is seen still streaming the Newcastle United game as others take pictures and there are loud cheers from the crowd 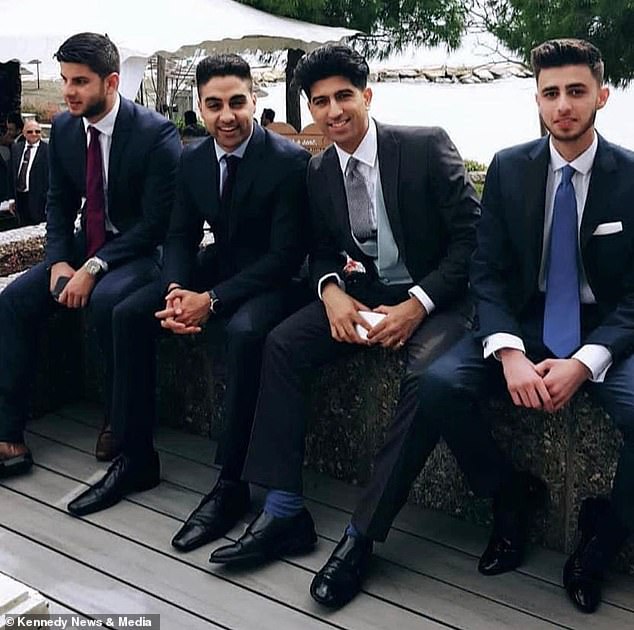 Shiv Varma, 28 and Fahill Sethi (third from left) had flown out to Cyprus for their relative’s wedding in 2019, when the viral footage was shot

The footage – which was filmed in 2019 – has gone viral since recently being uploaded to social media, having been viewed more than 550,000 times.

Instagram users were left delighted with the Newcastle United fan’s antics, describing him as ‘legendary’ and admitting it was something they would do too.

Shiv, 28, explained: ‘Fahill’s a massive Newcastle fan and didn’t want to miss the match while we were away.

‘We wouldn’t have been watching just any match at her wedding.

‘Everyone was taking photos before she came down the aisle and Fahill was pretending to do the same while still having the match on.

‘We had been watching the football before the ceremony when Sunaina started walking down the aisle.’

While most commenters called Fahill ‘legendary’ or a ‘genius’ not everyone was quite so effusive with their praise, blaming phones for ruining society.

One commenter described his antics as ‘truly legendary’, while another said: ‘This is something I would do.’

Another wrote: ‘Should be at the match then.’ 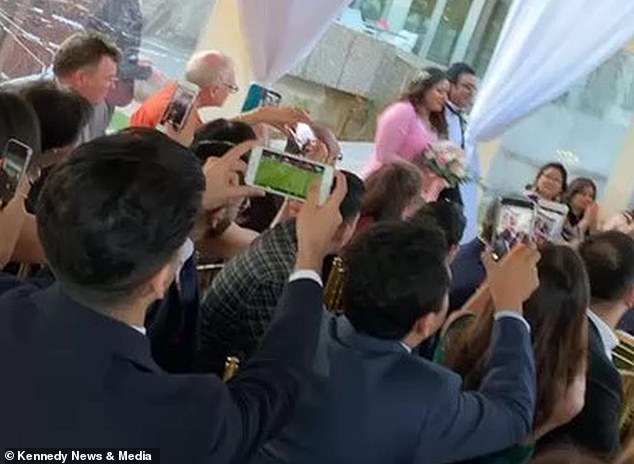 Guests applaud as beautiful bride Sunaina is accompanied down the aisle, ‘football-mad’ Fahill, 23, feigns his interest and instead watches the football match on his phone

Shiv continued: ‘When Sunaina came down the aisle he [Fahill] carried on.

‘I couldn’t stop laughing and neither could the bride when we showed her after.

‘Her husband loved it as well as he’s also a big footy fan.

‘Our whole family are Newcastle supporters despite growing up in Kent as all of our family are from there. He follows them closely.’