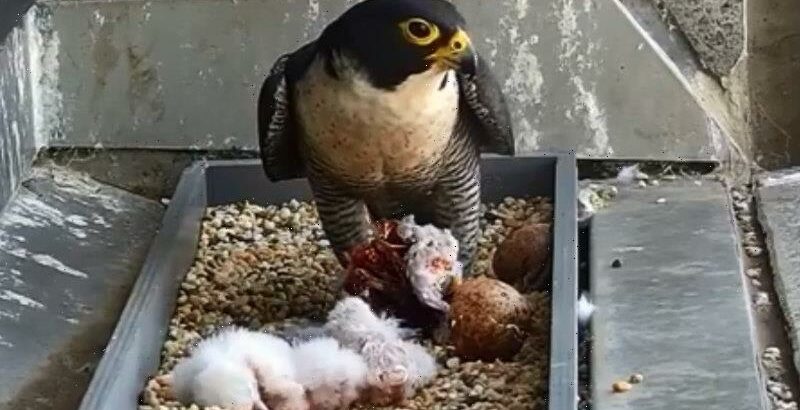 To falcons, Melbourne’s CBD is like a vast crisscross of glass-and-steel canyons – a natural hunting ground.

They perch atop the tallest buildings, sniffing the thermals, waiting for sparrows or finches they can drop on with breakneck speed.

These one-sided battles play out high above the city’s streets, unnoticed.

But now a more domestic drama has caught the eye of many, desperate for a break from the bleakness of coronavirus lockdowns: the city’s falcons have had offspring. 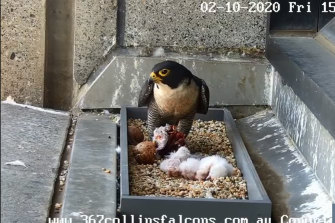 One by one, three nestlings hatched on Wednesday, huddled in a little box in a gutter atop 367 Collins Street, and immediately cried out for a feed.

A webcam watches their every moment. Almost 50,000 people from across the world tuned in on Wednesday, according to Mirvac, the company that manages the building and the project.

A fourth egg still sits, uncracked, mother and father taking shifts to keep it warm. Victor Hurley, the founder of the Victorian Peregrine Project, still hopes it will hatch.

“They normally have about a 90 per cent hatch rate, if there’s four eggs in the clutch,” he says. “But anything that can happen.”

The family of falcons and their pending new arrivals were thrust into the spotlight again last week after a 5.9 magnitude earthquake hit near Melbourne.

Live footage of the bird’s nesting box showed the building shaking back and forth as one of the parent falcons appeared hyper-alert and somewhat confused before leaping from the building with a squawk to see what all the fuss was about.

Dr Hurley installed the hatch boxes on the roof of the 34-storey 367 Collins himself. The building is older, its brutalist frame leaving plenty of nooks and crannies for nesting that modern plate-glass skyscrapers no longer offer.

The hatchboxes themselves are really just crates made of marine-grade plywood and filled with gravel. A peregrine falcon does not expect much in the way of home comforts.

“I noticed with the current pair, they laid their eggs at the front of the box and moved them to the back for more protection,” Dr Hurley says. “We put a little weather wall there for protection from the rain and they have taken the hint.”

Falcons have lived atop this building since at least 1991. The current pair arrived perhaps five years ago.

In five or six weeks, the babies – chicks – will be ready to take wing; the smaller males first, then the larger females. 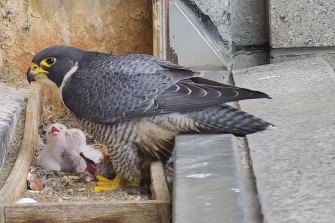 The parents will feed the chicks meat from hunting smaller birds, shredded with their sharp talons, until they are ready to leave the nest.

Once they can hunt on their own – dropping out of the sky at 360 km/h, well past their terminal velocity, to the fascination of physicists – the parents will chase them away, out of the city to find their own hunting ground. Such is the life of a predator.

The nest is the only one in the city, Dr Hurley says. Still, he’s seeing encouraging signs across the state.

“They are in a recovery phase, still, from a decline they had been in,” he says. “Like all birds of prey, they are never going to be super common, but they are in an increasing, expanding phase, and that’s encouraging to see.”