Jerusalem: Israel has begun celebrations for the US Embassy's relocation to Jerusalem, a move whose break with world consensus was underscored by the absence of most envoys to the country from a reception hosted by Prime Minister Benjamin Netanyahu.

The opening of the new embassy follows US President Donald Trump's recognition in December of Jerusalem as Israel's capital, a decision he said fulfilled decades of policy pledges in Washington and formalised realities on the ground. 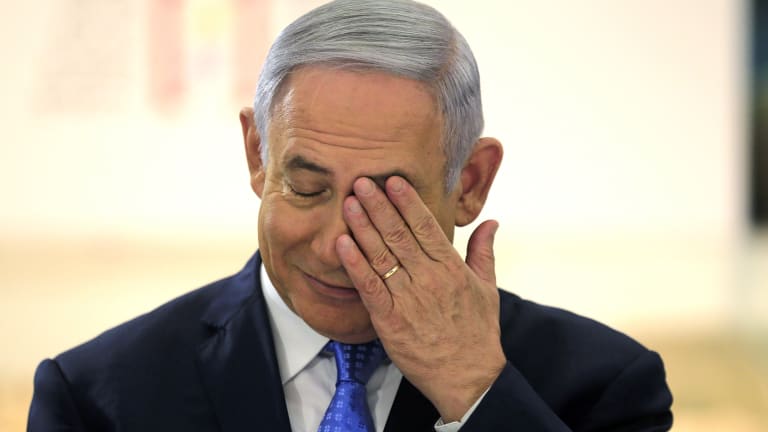 The Palestinians, who want their own future state with its capital in east Jerusalem, have been outraged by Trump's shift from previous administrations' preference for keeping the US Embassy in Tel Aviv pending progress in peace efforts.

Those talks have been frozen since 2014. Other major powers worry that the US move could inflame Palestinian unrest in the occupied West Bank and on the Gaza Strip border, where Israel reinforced troops in anticipation of the embassy opening.

Most countries say Jerusalem's status should be determined in a final peace settlement, and say moving their embassies now would prejudge any such deal.

Addressing dignitaries at the Foreign Ministry, including US Treasury Secretary Steven Mnuchin and the president's daughter and son-in-law, Ivanka Trump and Jared Kushner, the Israeli prime minister urged others to follow Washington's lead. 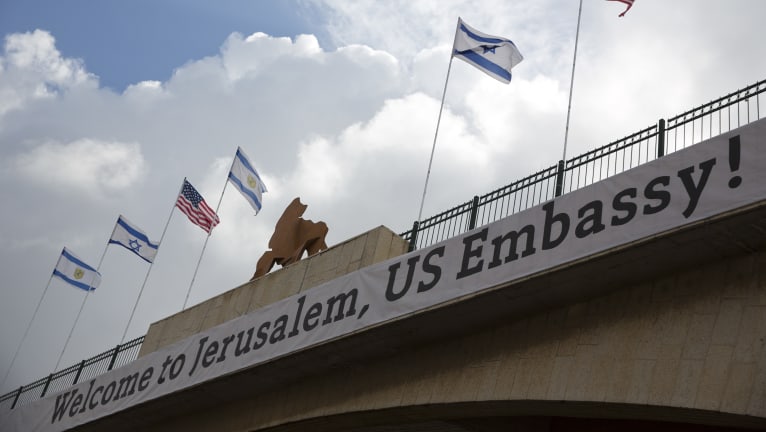 A sign on a bridge leading to the US Embassy ahead of Monday\’s official opening in Jerusalem.

Israel said all 86 countries with diplomatic missions in Israel were invited to the event, and 33 confirmed attendance. Among those present were delegates from Guatemala and Paraguay, which will open their own Jerusalem embassies later this month.

Attending the Foreign Ministry gathering were representatives from Hungary, Romania and the Czech Republic, but none from western European Union states – suggesting a rift within the bloc over Trump's Jerusalem move.

The EU mission in Israel tweeted on Friday that the bloc would "respect the international consensus on Jerusalem … including on the location of their diplomatic representations until the final status of Jerusalem is resolved".

Outside Jerusalem's ancient Damascus Gate, Israelis danced in another celebration on Sunday, marking the capture of the Old City from Arab forces in the 1967 Middle East War. 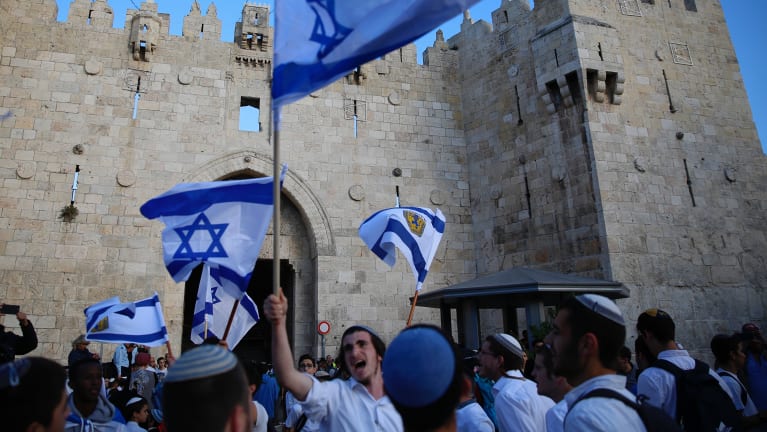 Hundreds of Israeli rightists entered Al Aqsa mosque compound, an icon of Palestinian nationalism and a vestige of ancient Jewish temples. Witnesses said some prostrated themselves in Jewish prayer, violating religious restrictions at the site and sparking scuffles with Muslim worshippers.

The US Treasury secretary called the embassy relocation "a sign of the enduring friendship and partnership between our two countries" and also referred to the US withdrawal last week from the Iran nuclear deal, a move welcomed by Israel and some US Arab allies in the Gulf but lamented by other world powers.

The Palestinians plan to demonstrate against Monday's inauguration from Arab districts abutting the Jerusalem site.

On the border with Gaza, Palestinians have also held protests as Israel prepares to mark 70 years since its creation, an event Palestinians call the Nakba, or Catastrophe, when hundreds of thousands of them were displaced from their homes.

More than 40 Palestinians have been killed in the latest violence.

In a recorded speech released on Sunday, al Qaeda leader Ayman al-Zawahri criticised Trump's decision on the embassy, as well as the leaders of Muslim countries he said had sold out the Palestinians. He also said Israel's Tel Aviv was Muslim land.

The Trump administration has sought to keep the door open to Israeli-Palestinian diplomacy by saying the embassy move did not aim to prejudge Jerusalem's final borders. The US consulate in the city, tasked with handling Palestinian ties, will remain.