Dr John Millis, a US physicist and astronomer, spoke to The Sun Online about the issues faced by consenting astronauts who wish to engage in rumpy-pumpy in micro-gravity. 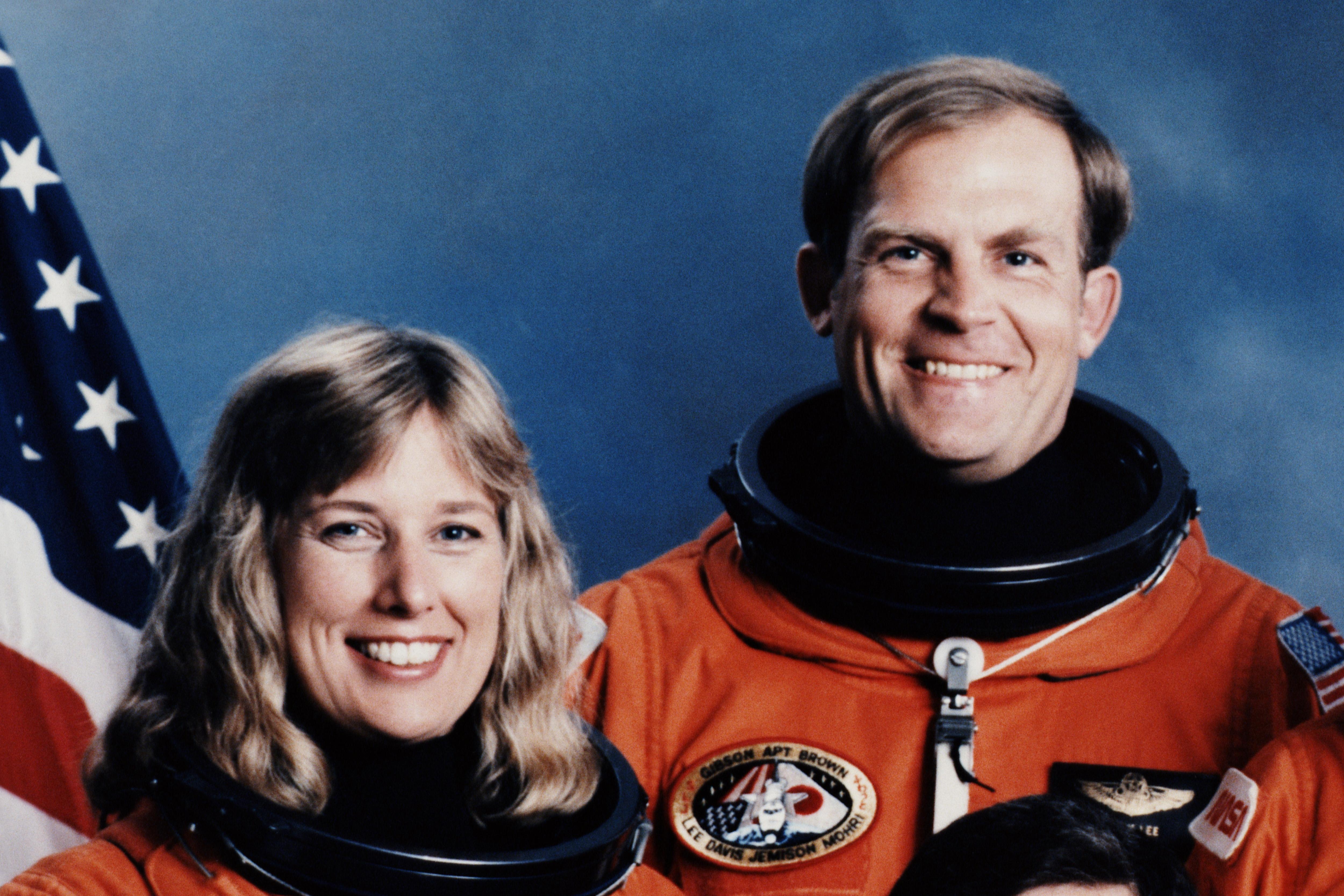 Dr Millis, of Anderson University in Indiana, compared sex in space to having intercourse while “skydiving” but added that it was “not impossible.”

He told The Sun Online: “The issues surrounding the act all revolve around the free-fall, micro-gravity, environment experienced by astronauts.

“Imagine engaging in sexual activity while skydiving – every push or thrust will propel you in opposite directions.

“Even the lightest touch can make it difficult to stay in contact if both persons are not properly anchored.

“The astronauts would need to brace themselves against the space station, and even each other.

“A shared sleeping bag, or similar, would perhaps be the most useful."

But more problems would arise if the romantic astronauts were able to lock together in a coital tryst.

Dr Millis, whose work has been funded by NASA, explains that in micro-gravity blood rises to your head, instead of your wedding tackle – making it harder for both men and women to get aroused. 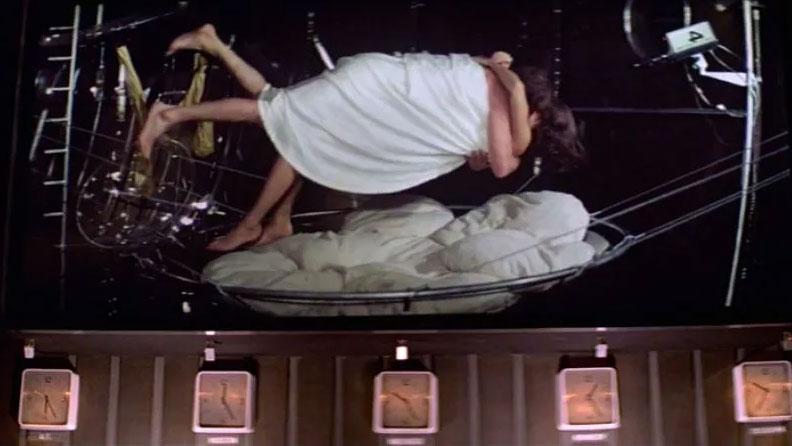 This low blood pressure below the waist also causes the tissue in a bloke's proud todger to shrivel – potentially impacting an astronaut’s confidence when it comes to lift off.

Another issue is that male testosterone levels plummet in space meaning that rocket-riding adventurers suffer from a lack of sex drive, says Dr Millis.

He adds: "In fact, the heart will shrink over time the longer astronauts are in orbit.

"It also means that there is less blood in our lower extremities, the region that the body pulls from when generating an erection."

Sex in an environment lacking gravity would result in ALL fluids such as sweat, vaginal wetness and semen pooling and floating around the cabin – making the high-jinks more than slightly uncomfortable, Millis revealed.

One small bonk for man – one giant romp for mankind

He said: "It would likely be very hot, especially as two bodies press against each other, as well as sweaty.

"Because of the micro-gravity environment sweat and tears don't run down the astronaut's bodies like it does hear on Earth, instead it pools like small ponds of fluid near where it was secreted.

"If the motion is vigorous enough it could be ejected from the surface of the body.

However, the academic believes that despite the difficulties a couple "could certainly become aroused and reach climax in space. " 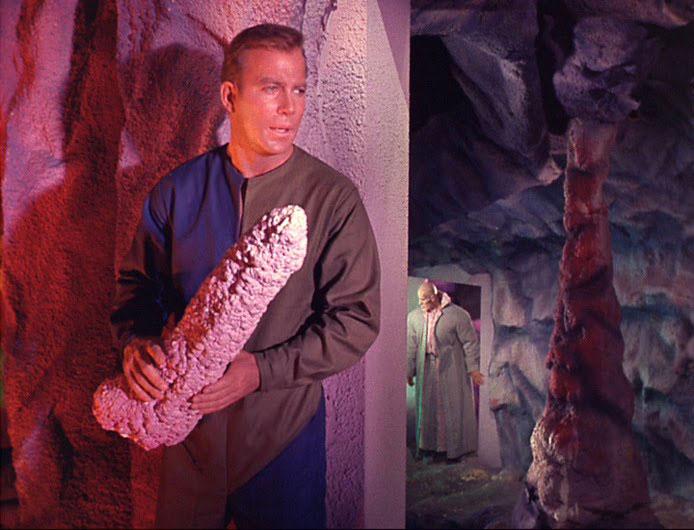 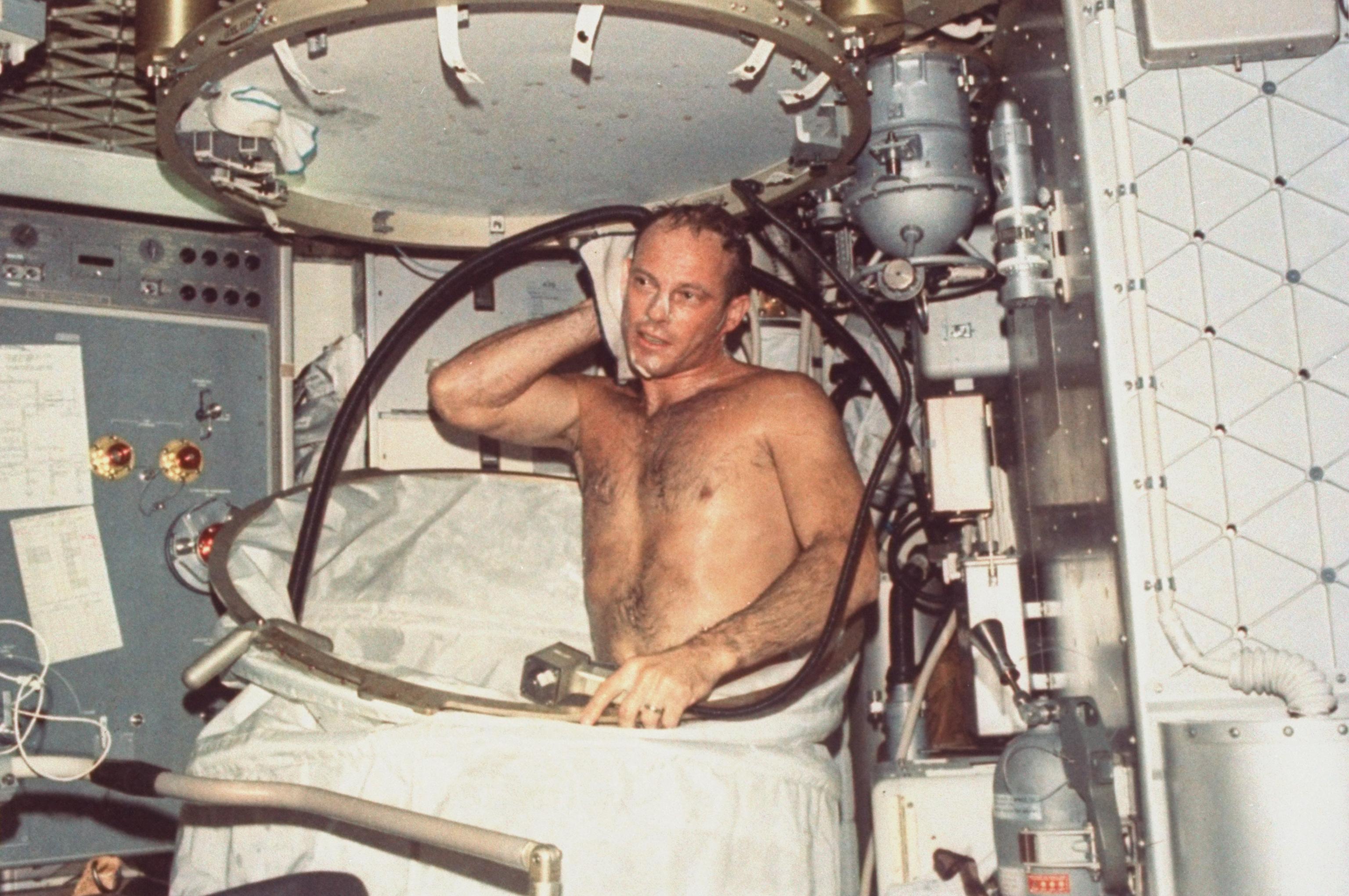 In his book, Life in Space, NASA technician Harry Stine claimed that sex had been simulated by the space agency – and that a lucky “third person” was the best way to facilitate the friskiness.

He said: "It was possible but difficult and was made easier when a third person assisted by holding one of the others in place."

US sci-fi author and inventor Vanna Bonta created an outfit known as the 2suit to help astronauts get their rocks off in space.

Vanna came up with the idea while she and her husband were taking part in a zero-gravity flight and were unable to hug each other because of the weightlessness.

The best sex positions for space?

Dr Millis told to The Sun Online what he considered to be the best sex positions in space.

He said: “Any mechanism that would help keep the bodies of the couple pressed together, like a sleeping bag anchored to the wall, would help facilitate intercourse.

“In that situation – a couple in a sleeping bag – the natural positions would either be missionary – face-to-face – or in a spooning position.

“So, I would guess that either of those positions would be the most likely to succeed.

“And sleeping bags already exist in the ISS, so it would be the easiest to make happen since there wouldn't be any additional equipment or bracing required to help hold the couple in place during intercourse.” 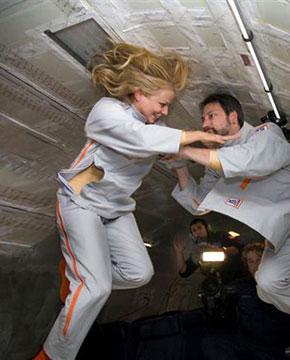 The 2suit has large flaps which open at the groin and is covered in Velcro which enables users to attach to each other and engage in sexual intercourse.

It is intentionally baggy – with wearers able to adjust its roominess – to facilitate movement.

Vanna and her husband tested out the 2suit on a zero-gravity aircraft – but only kissed and hugged in front of expectant photographers.

Has anyone ever had sex in space?

In 1982, the first space launch involving both men and women – a Soviet mission to the Salyut 7 station – sent tongues wagging about out-of-this-world how's-your-father.

However, the only lady on board, Svetlana Savitskaya, was married and had a ferocious no-nonsense reputation which quickly dispelled any notion of hanky-panky in microgravity.

The first married couple to go into space were Americans Jan Davis and Mark Lee – who had fallen in love at a NASA training camp.

They wed in secret just before their mission in 1991 because of the agency’s strict policy against having love birds in space which they believe can spoil team dynamics. 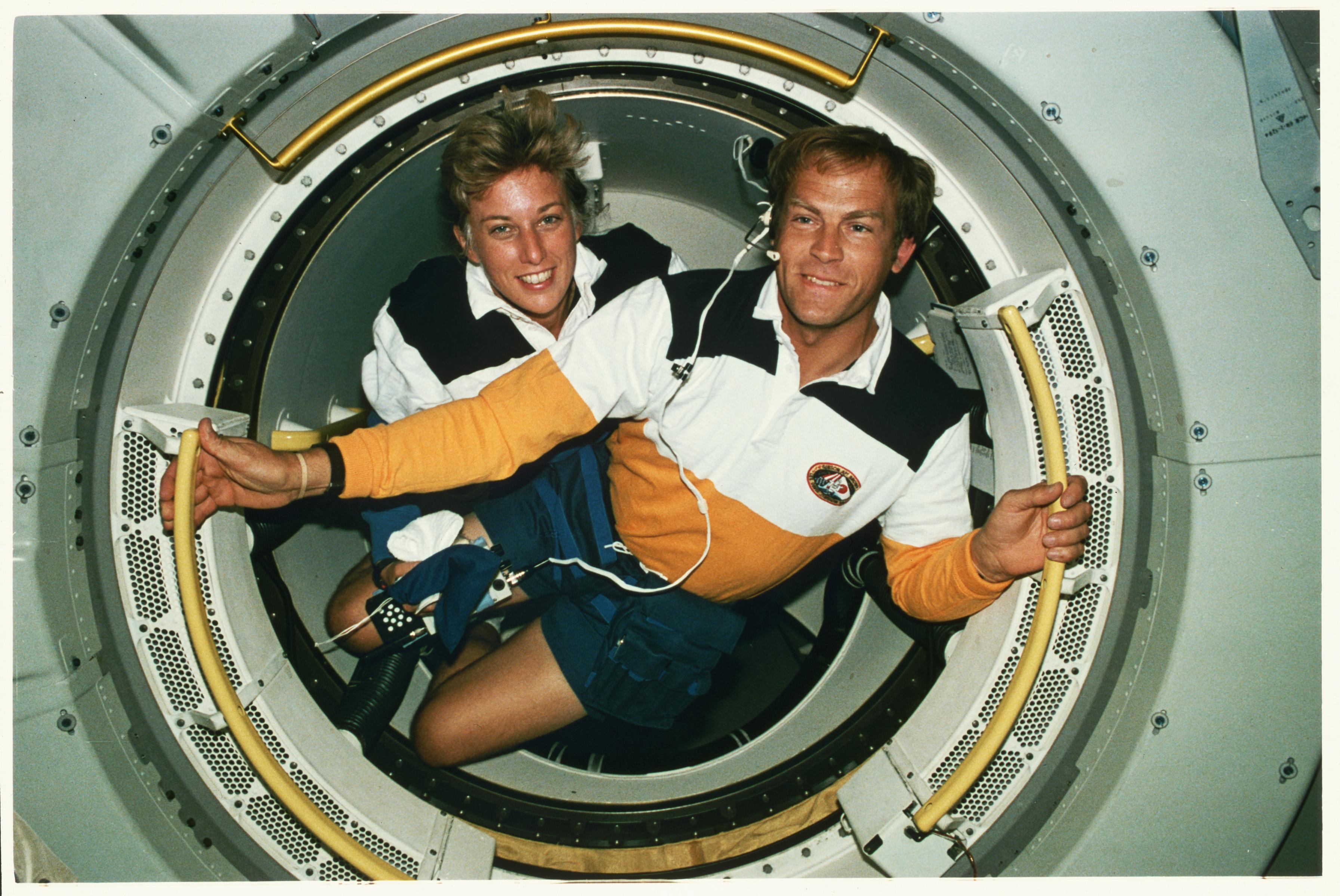 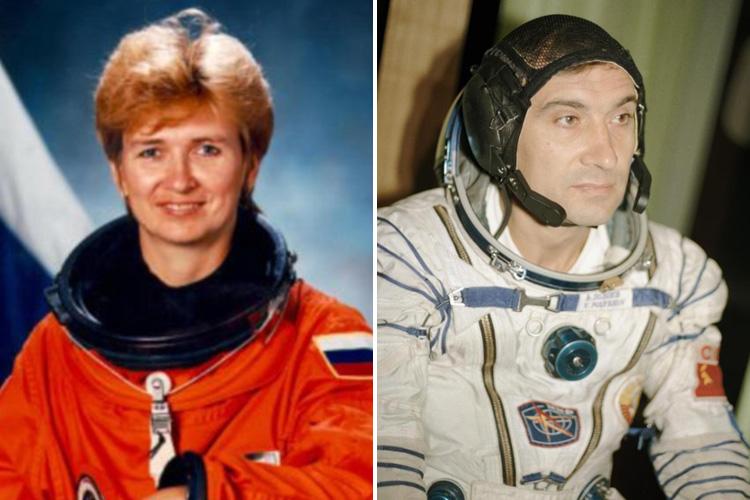 But despite rumours about their relationship on board, the couple have never revealed if they were the first people to join the 200-mile high club.

More whispers of intergalactic naughtiness emerged over cosmonaut Valery Polyakov – a man who, from 1992 to 1993, spent a recordbreaking 14 months in space during one single trip.

The Russian adventurer reportedly grew close with fellow astronaut Elena Kondakova during their time together on the Mir space station.

But the pair and Kremlin officials furiously denied the claims that they had stripped off and bonked for all-mankind in the cramped cabin.

In space, no one can hear you scream

In his diaries, Polyakov did discuss being tortured by thoughts of randiness while on his long and arduous mission with the sultry Elena.

He wrote: "No need to say what we're longing for.

"Men think about those things. One can't turn away from them. But these thoughts somehow fade with time."

The noble Russian also mentioned that his superiors had suggested he take a sex doll companion to explore the stars with him on the mission – but he said he feared he would grow too attached to the busty inflatable romp-unit.

He said: "Psychological Support Service sent us some nice, 'colourful' movies which help to recover our will, to act like a normal adult male.

"There is nothing to be ashamed of.

"Men think about those things – one can't turn away from them."

Probably the most infamous space sex story came from French author Peirre Kohler who claimed that NASA has commissioned a study on potential bonking positions in zero-gravity. 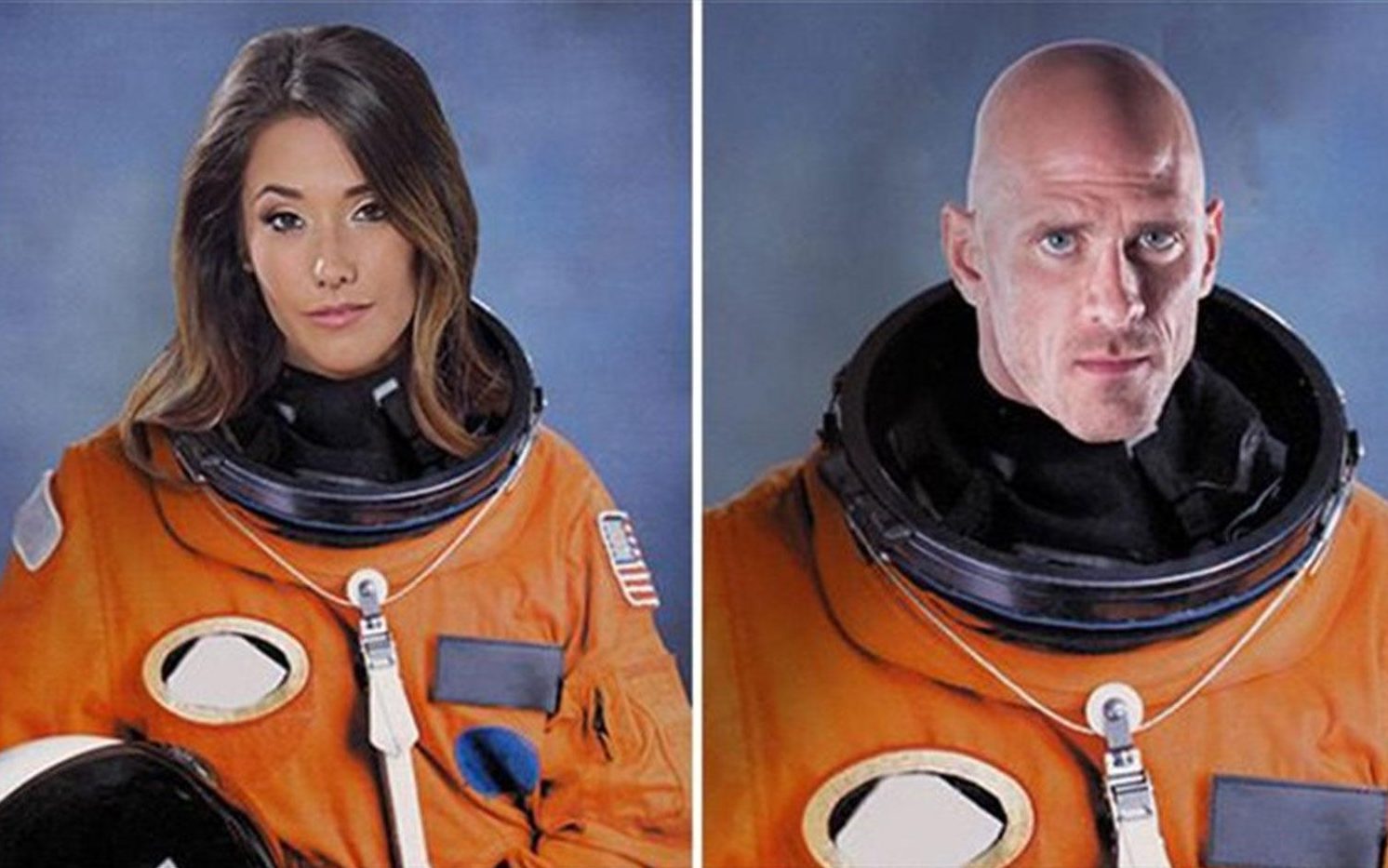 He pointed to a report, which turned out to be a hoax, which cited 10 different positions – six of which required an elastic band or a sleeping bag-like sex tube.

The site attempted to crowdfund $3.4million in 60 days for the movie – which would have starred adult films actors Eva Lovia and Johnny Sins.

In the end, the firm only managed to raise around $230,000 in what was some reports branded a clever publicity stunt.

Would a space baby be healthy?

Dr Millis says the two main issues with having a "successful" pregnancy in space is the higher radiation levels outside the Earth's atmosphere and the micro-gravity environment's impact on a developing baby.

He said: "To the forming fetus, the higher radiation levels would cause cell deformation and mutation, possibly terminating the pregnancy before reaching full term.

"Normally Earth's atmosphere and magnetic field protect us from all manor of cosmic radiation and solar wind.

"However, in the void of space there is little that stops the radiation from penetrating our bodies, particularly over long exposures."

Discussing the problem with microgravity, he continued: "Because of the absence of significant gravity the bone structure of the fetus could not form correctly, making successful development of a human baby impossible.

"Another problematic outcome would be an ectopic pregnancy, which could endanger the life of the female astronaut.

Another reason sex in space is banned by NASA is due to the risks a pregnant woman would pose to a mission, according to academics Haley Schuster and Steven L. Peck

Resources such as food and medical supplies as well as oxygen would be compromised by the expectant mother and eventually her child, they write.