Italian country estate valued at £8.75m with its own BASILICA goes up for auction – with no reserve

A unique, centuries-old country estate – a former Benedictine convent – with its own basilica is being auctioned off in Italy.

Villa Badia was previously on the market for €10 million (£8.75m), but will now be auctioned off between June 26 and 29 to the highest bidder – regardless of how low the final bid is.

The main property at Villa Badia, Piedmont, has 15 bedrooms and 14 bathrooms, along with large entertaining and meeting rooms with period features.

On-site is a Romanesque basilica, which has national heritage status, and includes a crypt dating back to the 8th century, along with Renaissance frescoes and colourful mosaic floor. 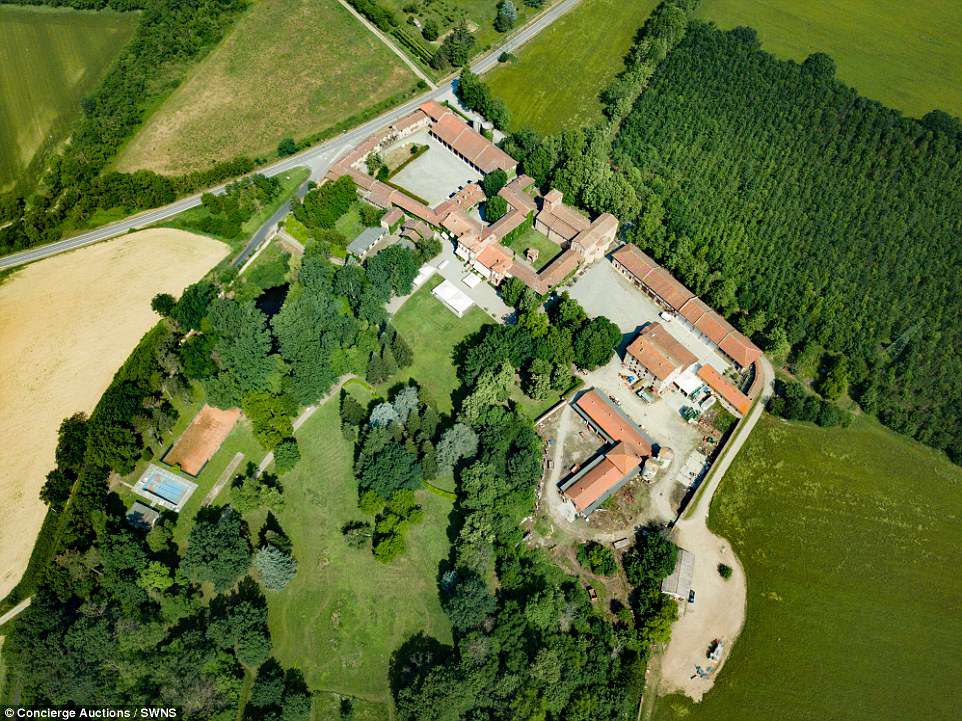 The historic estate, a former Benedictine convent, is enclosed within a walled park, and surrounded by the Monferrato countryside in Piedmont, Italy. It is to be auctioned off with no reserve 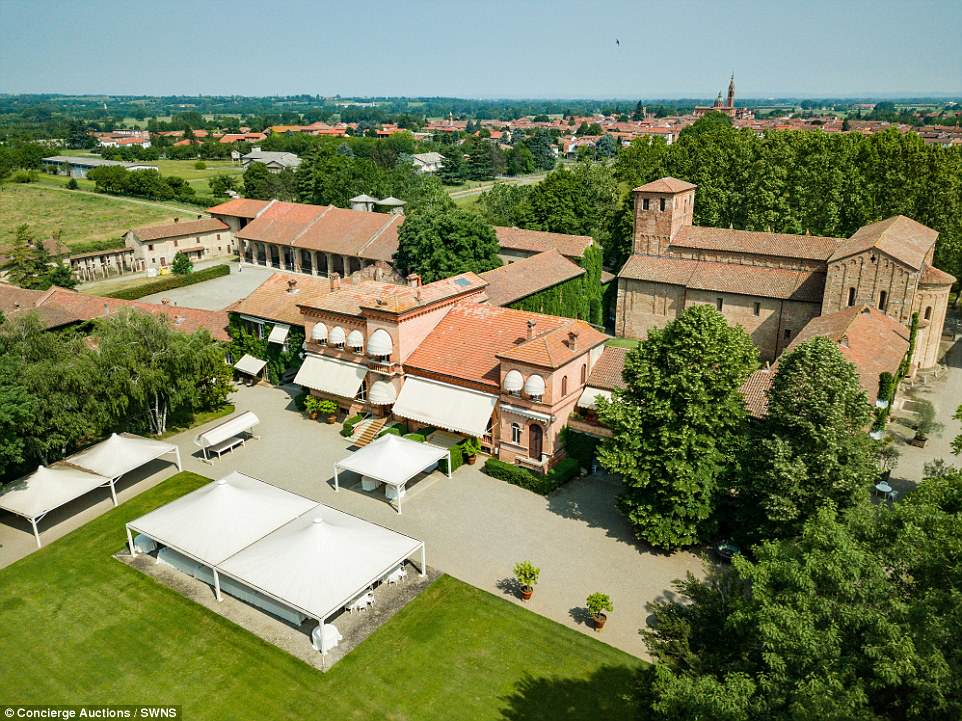 The main property at Villa Badia has 15 bedrooms and 14 bathrooms, plus entertaining and meeting rooms with period features

It sits adjacent to the stunning villa that, according to Charlie Smith, European advisor for Concierge Actions which is auctioning the property with no reserve, has 32,000 sq ft of floorspace.

Given that, by comparison, the floorspace of typical family homes around the world range from about 500 sq ft in Hong Kong, to over 2,000 sq ft in the United States and Australia, there is definitely no shortage of space.

And that is before the potential buyer factors in large cellars and ancillary buildings at the property.

Smith said: ‘ We are privileged to be representing such an important Italian country estate in Piedmont, a region known the world over for its truffle harvest.’

He added that while, ‘it is not unheard of for historic properties to include a small chapel within the grounds, a home with its own basilica is a truly unique offering.

‘Villa Badia has immense potential as a tourism venture.’ 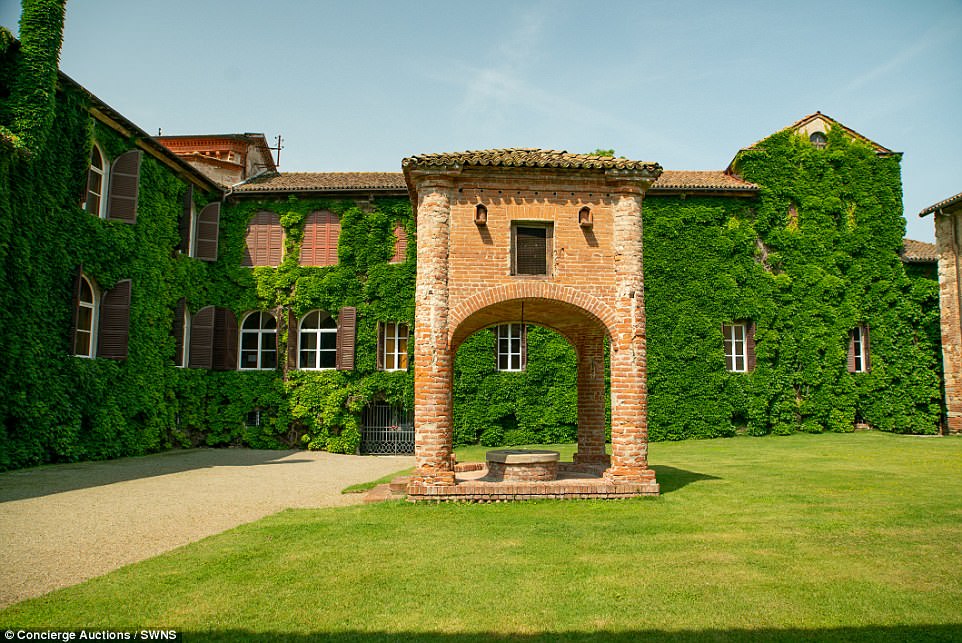 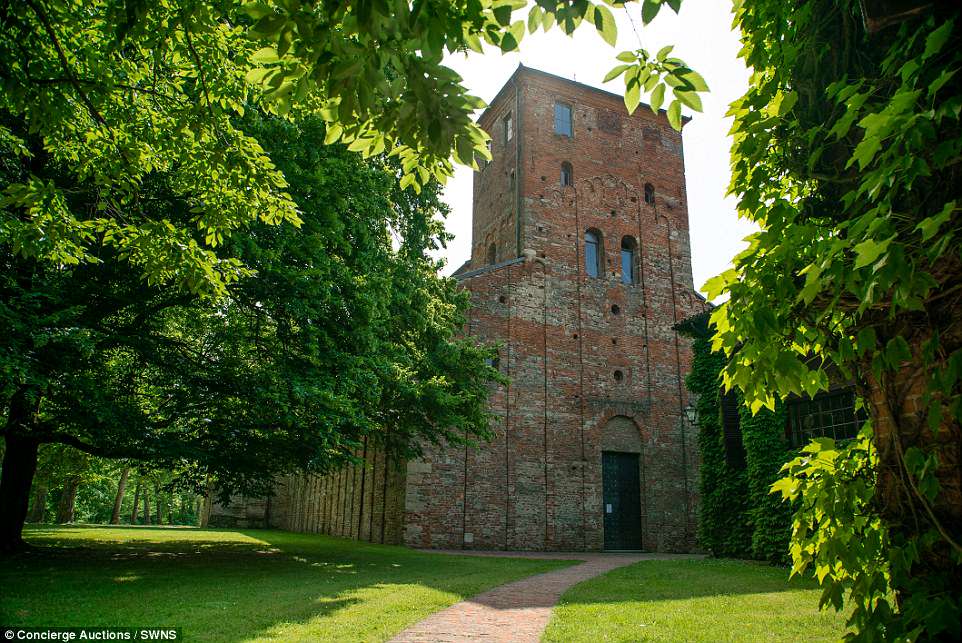 It has its own stone Romanesque basilica which has national heritage status. It was founded in 722 by the Lombard king Liutprando 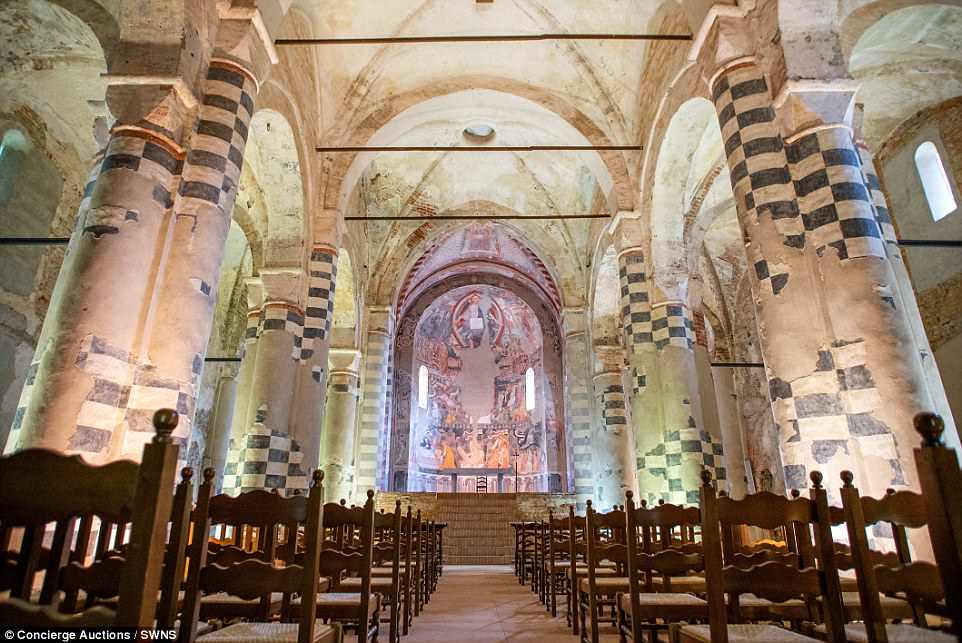 It is considered one of Piedmont’s most important medieval monuments, with plenty of arches and columns 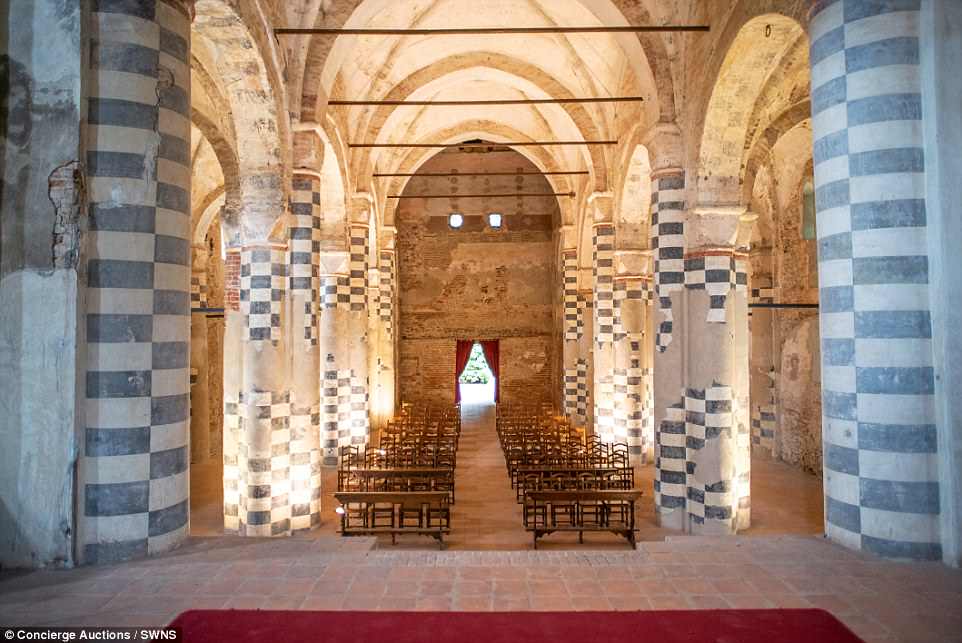 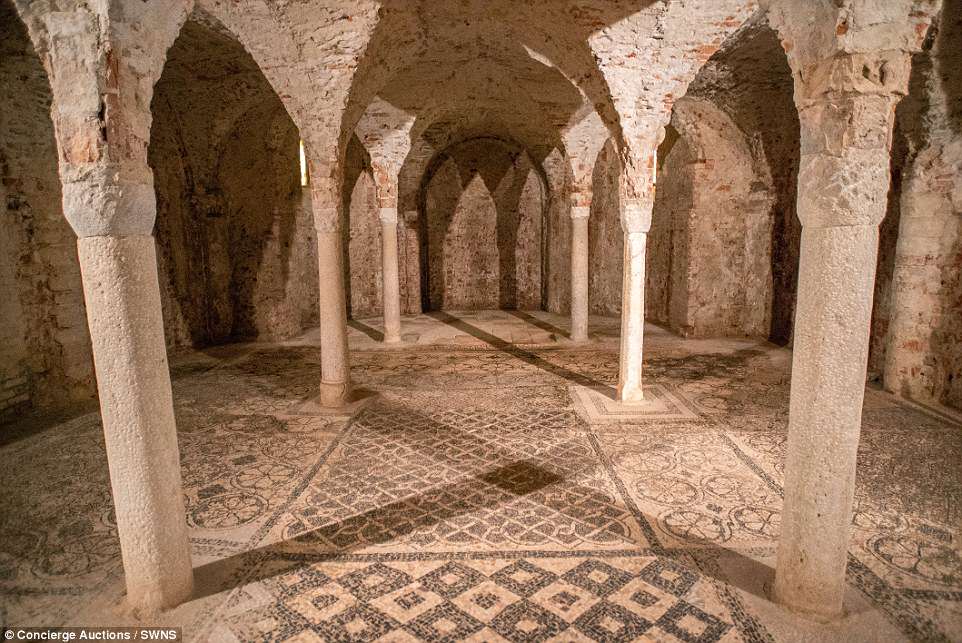 The church includes a crypt dating from the 8th Century,  with a mosaic floor, above. It also has Gothic elements 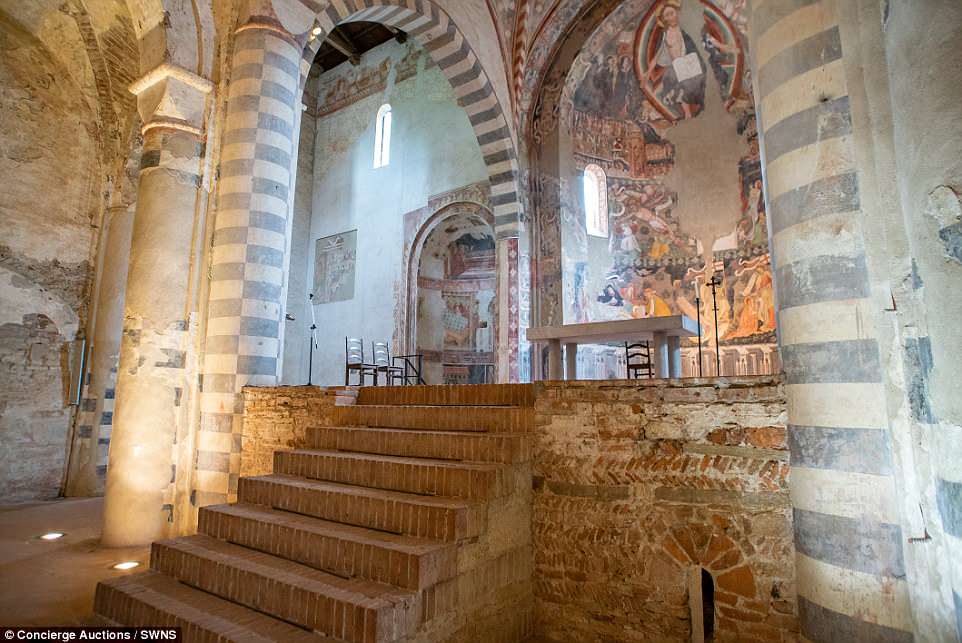 Almost every part of the breathtaking basilica has something interesting to view, from its architecture to its decorative walls 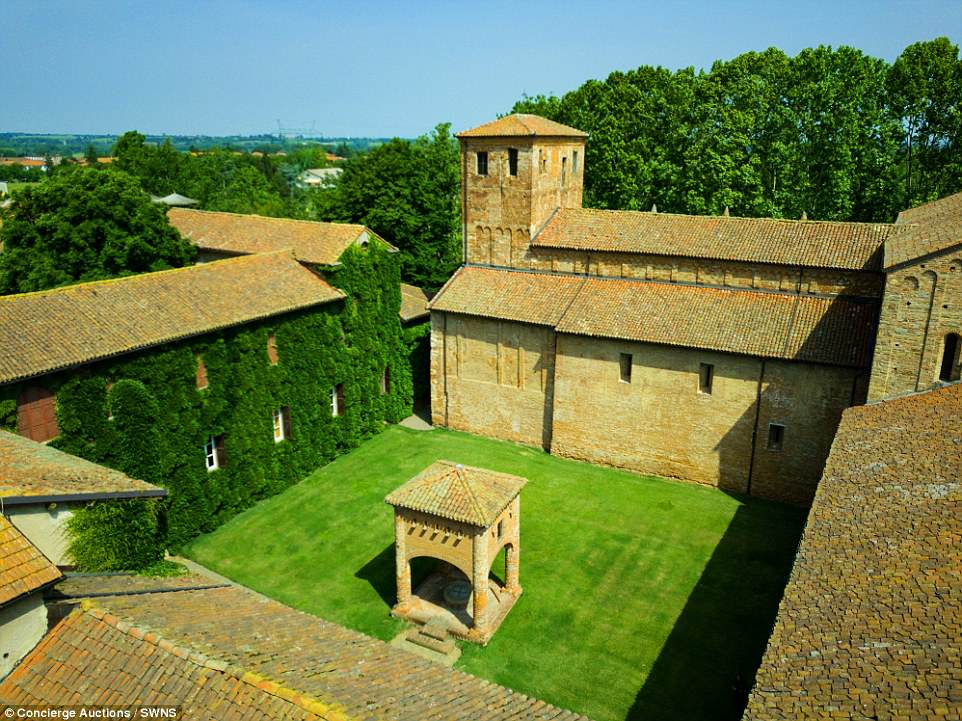 The historic estate is a former Benedictine convent, originally developed as part of the Romanesque Abbey of Santa Giustina di Sezzadio 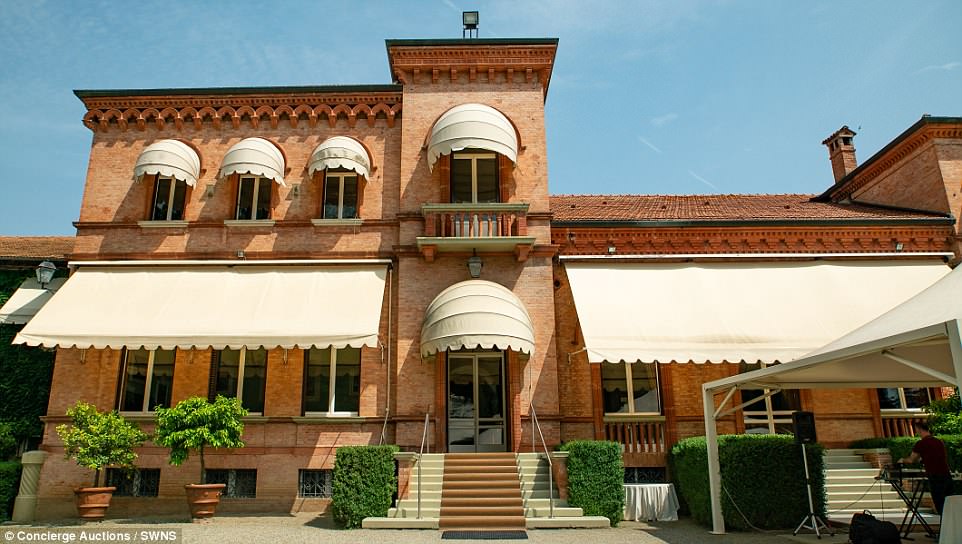 Dating back to the 11th century, this ancient, architecturally stunning complex has restored residential quarters preserving its original beauty and charm 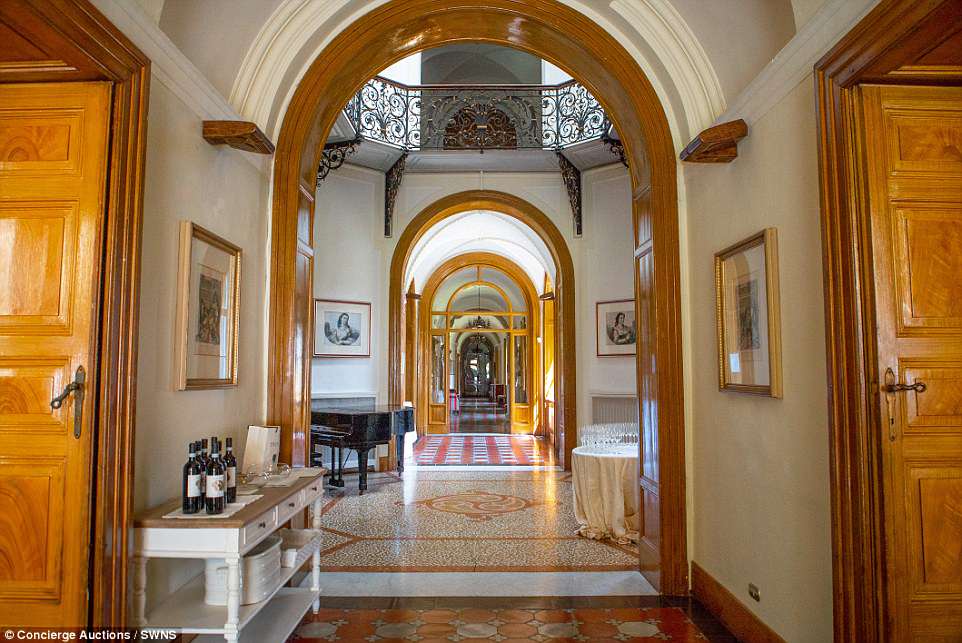 With 32,000sq ft of floorspace, the villa is around 35 times larger than a typical English family home, says Concierge Auctions 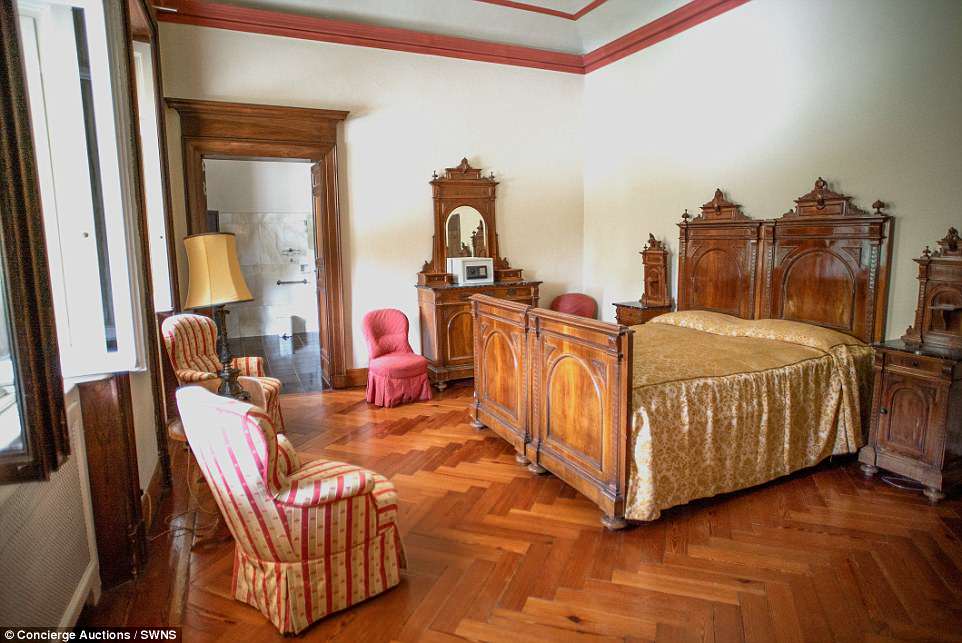 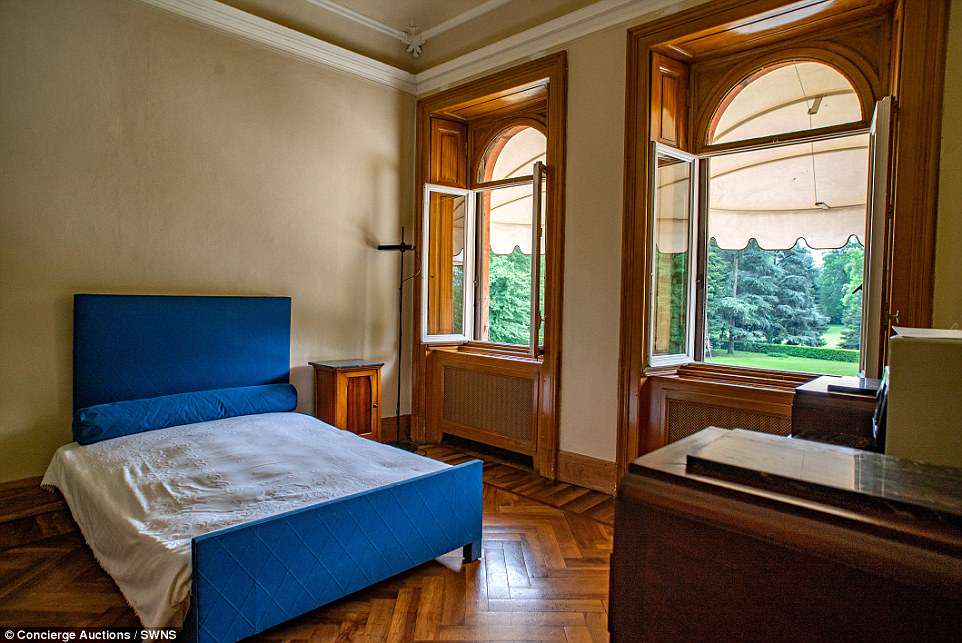 This room has sweeping countryside views. The Piedmont region of Italy is known for its elegant cuisine and Barolo wine 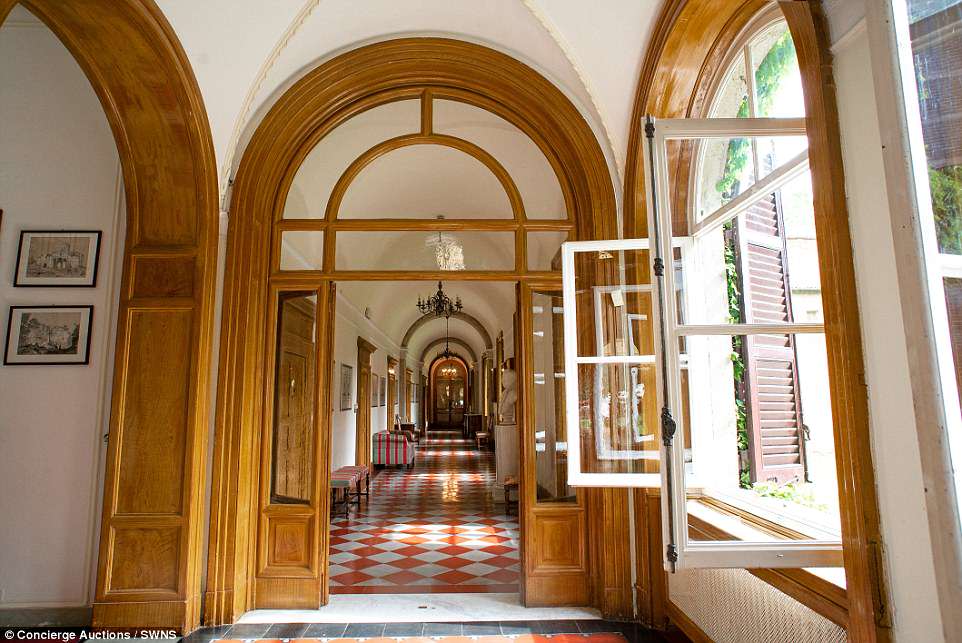 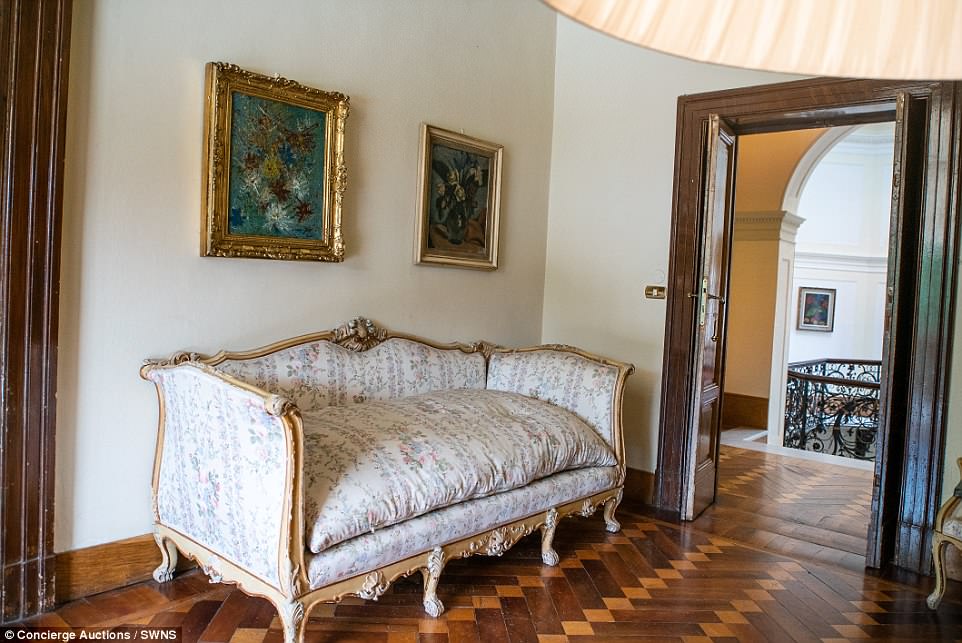 There is plenty of space to relax inside the property, which has an abundance of elegant, period features 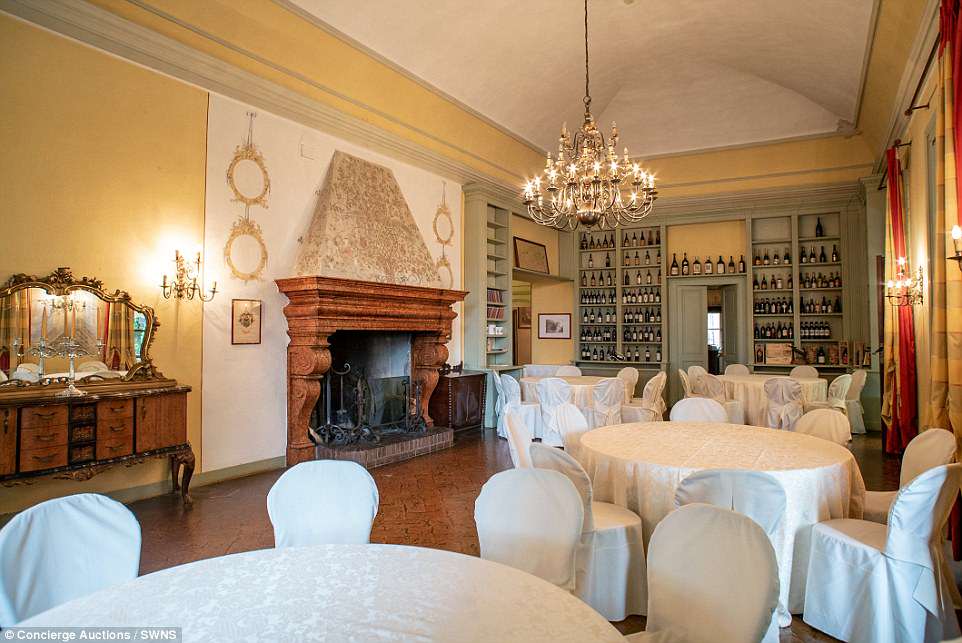 Dining areas include this spacious room, perfect for hosting parties and entertaining large groups of visitors 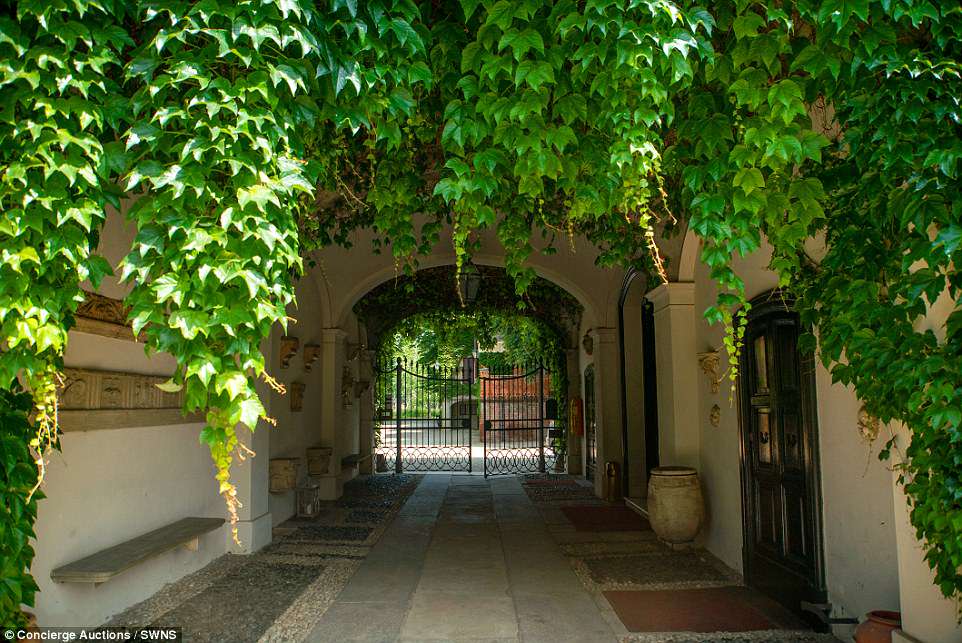 Villa Badia was previously on the market for €10 million (£8.75m), but will now be auctioned off between June 26 and 29 to the highest bidder – regardless of how low the final bid is 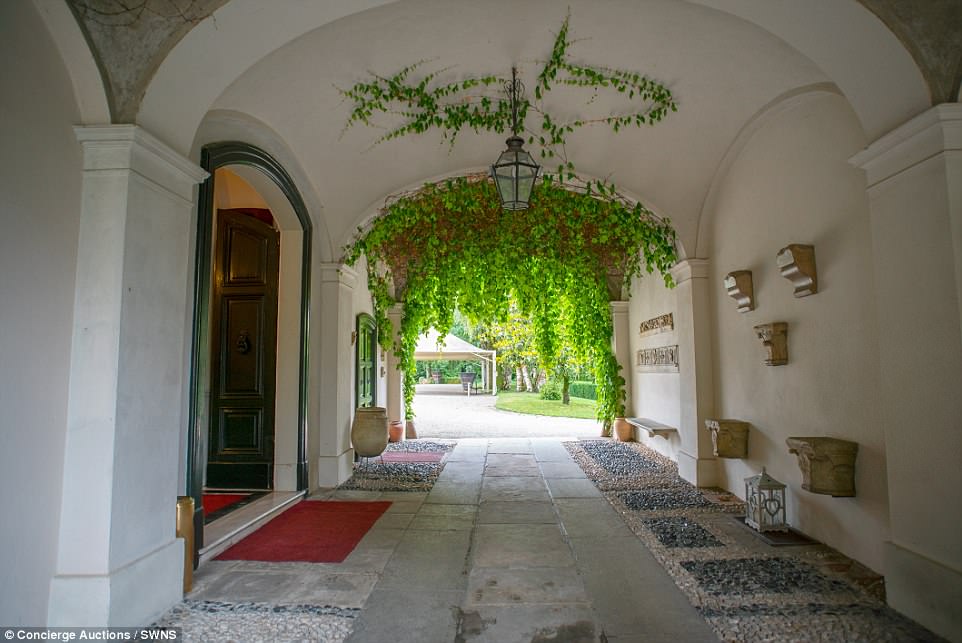 Outside is just as impressive, as the property includes shaded courtyards, above, some of which are covered with creepers 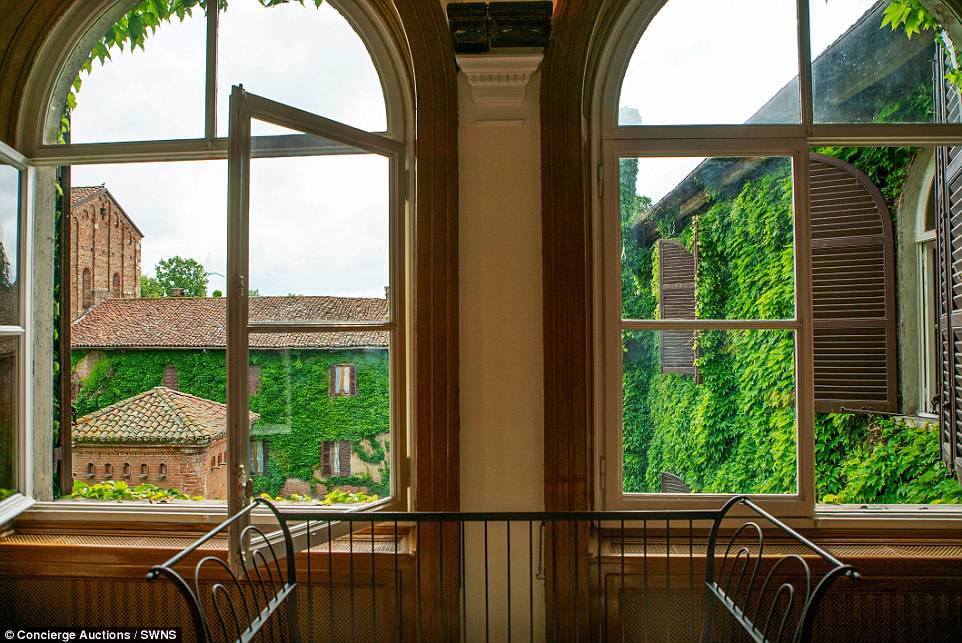 The main villa has a large professional kitchen and there are also five ancillary apartments, which either overlook the parkland, abbey or the cloister 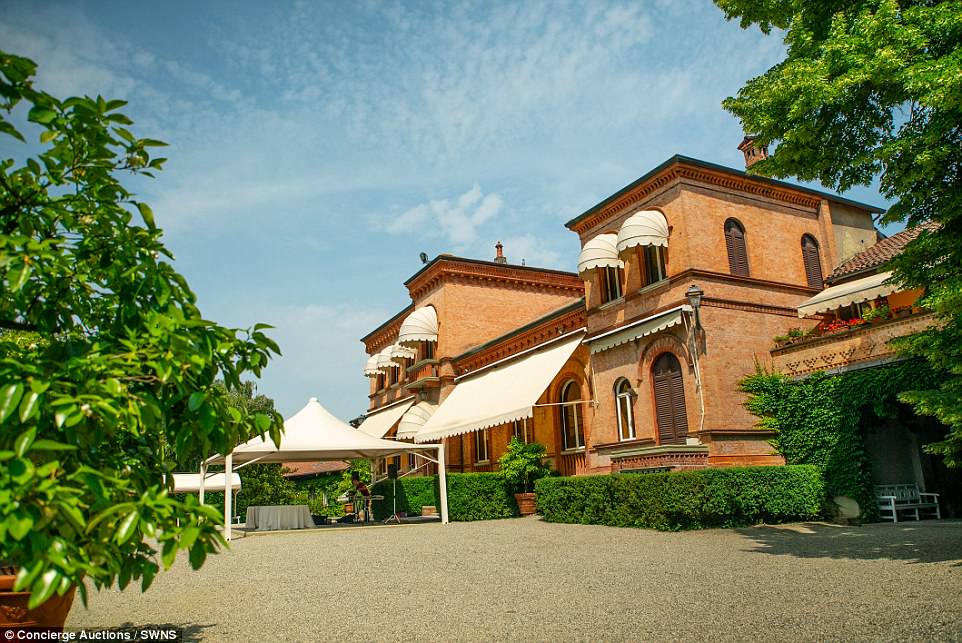 The property sits within nine hectares of grounds and includes a swimming pool, clay tennis court and small lake