Former England footballer Nicky Butt, 44, denies assaulting his wife of 11 years and damaging her £800 iPhone during row at their £4.4m luxury home

The ex midfielder, 44, today appeared at Manchester Magistrates’ Court where he denied assault by beating and criminal damage

The 44-year old ex-midfielder appeared before a district judge accused of assaulting spouse of 11 years Shelly and damaging her £800 iPhone 7 during a row at their £4.4m home in an exclusive millionaire’s row earlier this year.

Butt, who lived with his wife in the village of Hale, Greater Manchester, is coach at United’s Academy. He had been arrested in June following the alleged incident which occurred at 2pm on April 16.

Shelley is believed to have suffered a cut thumb in the argument but did not require hospital treatment.

Today Butt appeared at Manchester magistrates’ court charged with assault by beating on 44-year old Shelly and criminal damage to her Apple Iphone 7 to the value of £800 ‘intending to destroy or damage such property or being reckless as to whether such property would be destroyed or damaged.’

He claims the phone was ‘thrust’ into his face during the row and he accidentally knocked it out of Shelly’s hand.

He will face a two day trial at the magistrates’ court in February in which he and Shelly will be cross examined about their marriage.

Butt was charged last week but in a highly unusual legal move his case did not appear on a public court list.

It was adjourned on October 17 without any journalists present at the request of defence lawyers after it is believed prosecutors gave a brief outline of the case. The maximum sentence for common assault is six months imprisonment.

Prosecutor Joanne Cronshaw said: ‘There are a number of witnesses and the trial will take at least a day and a half to two days. There was scratch to the hand caused within the incident relating to the first charge.’

Nicky Butt kept his head down as he left the court, wearing a cap and long dark coat (left) Butt is pictured with his wife in May 2014 (right)

Defence lawyer Lisa Roberts said her client was due to go on holiday with his two children and claimed he had not been given access to various evidence including police body cam footage and photographs of Shelly’s injury.

She added: ‘He has no previous convictions and is of good character.

‘The defendant does not know how the complainant comes about her injury. The phone was thrust into his face and he knocked it out the way by accident 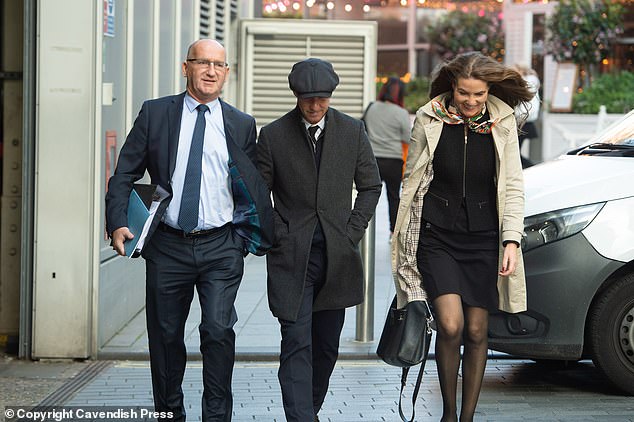 ‘He strenuously denies these allegations and it is important these issues are heard. This will go into a two day and Mr Butt will give evidence.

‘There is issue as to fact and character evidence as well. It is alleged some photographs were taken of the injury but there is an absence of seeing these exhibits. Also the complainant’s demeanour at the time maybe become relevant.

‘He has booked a holiday abroad with his children. It’s the only holiday that they have together and it has been booked and paid for.’

Butt was granted unconditional bail until his trial. A pre trial hearing will be held in January. District Judge James Hatton said: ‘It’s not unusual in domestic abuse cases for alleged history to be discussed.’

Butt and Shelly had split up last year and he had been living in a luxury apartment whilst she remained at the family house in Bowdon, near Hale, Greater Manchester with the couple’s two children.

It is still thought the property is currently on the market.

Lawyers for the ex-Red Devils star released a statement saying: ‘Mr Butt strongly denies any allegations or suggestions of an assault and will continue to co-operate and assist the police with their ongoing investigations.’