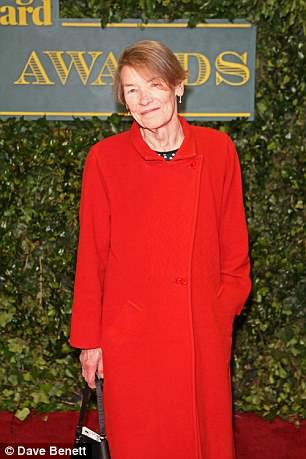 Glenda Jackson, who said she ‘admires’ Theresa May and that Jeremy Corbyn is not an election winner

Glenda Jackson has said she ‘admires’ Theresa May – and claimed that Jeremy Corbyn is not an election winner.

The 81-year-old former Labour MP and Oscar-winning actress praised the Prime Minister’s maturity in her ‘solitary’ role leading the country.

In a revealing interview, Miss Jackson, pictured, said of the Prime Minister: ‘I have a lot of admiration for her. It’s such a time to be as solitary as she is.

‘You know she doesn’t get support except from a small group of people. You look at her colleagues and think, “She’s the only bloody grown up in the room”.’

But asked if she would ever leave Labour, she replied: ‘God, no. I’d never be a member of another party and I would never ever vote for any candidate other than Labour.’

When asked if Mr Corbyn was an election-winning leader for her, Miss Jackson said: ‘No, we’re not going to win, but then are they [Theresa May’s Conservative party]?

‘We’re on course for some kind of combined government.’

The former MP for Hampstead and Kilburn described how the anti-Semitism scandal has damaged her party.

‘I can’t see the Labour Party in a position to form a government. I don’t like saying it, but there it is,’ she told the Daily Beast website.

‘What party is Jeremy leading? It’s not a party I know. Look, who’s running it now? Momentum isn’t it? I wasn’t a member of Momentum.’

Miss Jackson, who served as an MP for 23 years before retiring in 2015, said she did not believe Mr Corbyn was anti-Semitic but added that the party leadership should look into the issue and take appropriate action.

‘Jeremy Corbyn is not a racist, and I don’t believe he is anti-Semitic,’ she said. ‘What he is is pro-Palestinian.’

Mhairi Black said his views were made clear during a private conversation, but she failed to offer any further details.

Last night the Labour Party dismissed her allegations as ‘nonsense’.

Labour faced claims of hypocrisy last night after it advertised call centre jobs at one of its offices on £8.75 an hour while demanding McDonald’s pay all its staff at least £10 an hour.

Frontbenchers, including Jeremy Corbyn and John McDonnell, have given their backing to industrial action by workers at the fast-food giant demanding the higher rate of pay.

But they were left red-faced after activists spotted a job advert on the party website for four call centre workers to handle membership queries.

The vacancies at its office in Newcastle upon Tyne pay £8.75 an hour.

Craig Dawson, chairman of TUC Young Workers and a GMB activist, tweeted: ‘We have many GMB young members working in Labour’s call centre. It’s only right that they receive £10 per hour in line with Labour and GMB policy.’

The Labour Party said: ‘The roles advertised will pay the current living wage.’