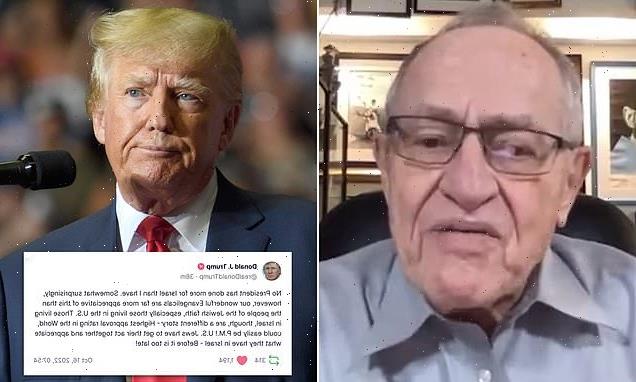 One of Donald Trump’s former lead attorneys told him Jewish Americans won’t vote for him despite his commitment to Israel because they care about a myriad of issues, including gay rights and access to abortion.

Drershowitz, who reiterated that he did not vote for Trump, told his boss that helping Israel was not enough and that he couldn’t stand behind the GOP’s agenda.

‘Jews like me admire what you did for Israel, we appreciate it, but we can’t vote Republican because Israel is not the only issue that we deeply care about,’ he told Trump. ‘We’re Americans.’

Dershowitz said that like him, other Jewish Americans could be liberals who also care about gay rights, access to abortion, climate change and gun control, which are ‘issues Republicans are not good on.’

It comes as the attorney continues to defend Trump, who faces anti-Semitism accusations following a bizarre post on Truth Social demanding Jewish American’s appreciate him like they do in Israel, where he claimed he was so popular he could become the next prime minister. 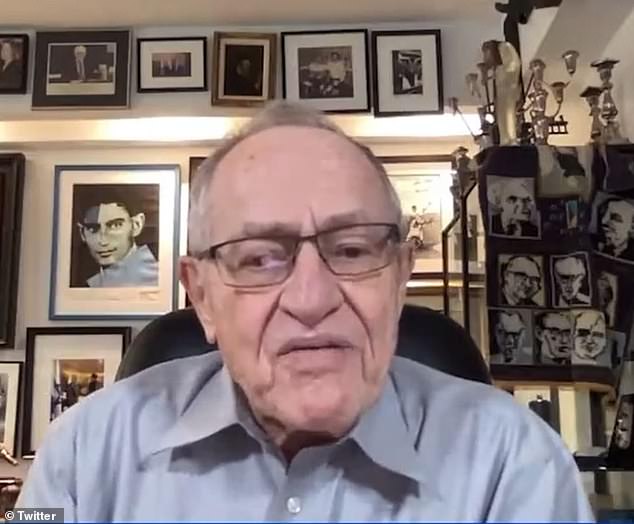 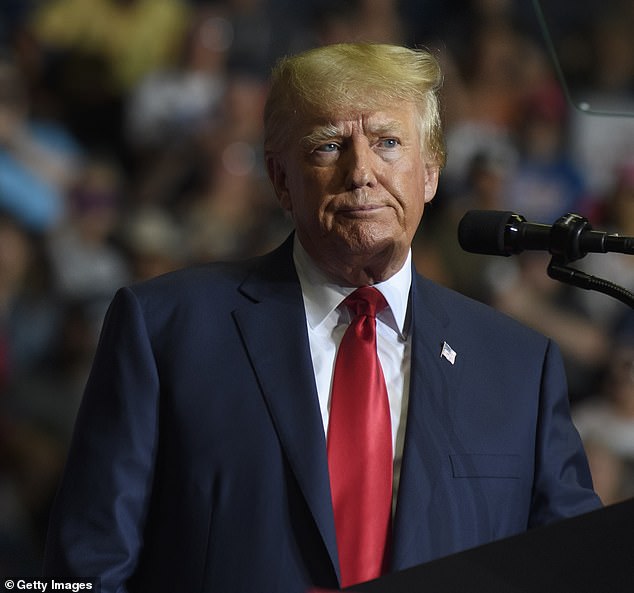 The former president has come under fire for his post condemning his lack of support from Jewish Americans, telling them to ‘get their act together’

Last Sunday, the former president wrote: ‘No President has done more for Israel than I have. Somewhat surprisingly, however, our wonderful Evangelicals are far more appreciative of this than the people of the Jewish faith, especially those living in the U.S.

‘Those living in Israel, though, are a different story – Highest approval rating in the World, could easily be P.M.!’

Trump concluded: ‘U.S. Jews have to get their act together and appreciate what they have in Israel – Before it is too late!’

Dershowitz, who served on Trump’s defense team during his first impeachment and criticized the FBI’s raid on Mar-a-Lago, has tried defending the former president, who has come under fire by the Anti-Defamation League.

Speaking to Newsmax on Monday, Dershowitz said Trump is not an anti-Semite, and said his client has long questioned his popularity in the Jewish community.

‘Virtually every time [Donald Trump] saw me, he would say to me, “Alan, how come, you know, the Jews don’t show their admiration for me by voting for me?”

Dershowitz said he’s explained to Trump that Jewish Americans care about a whole range of issues, but that the former president will retain the votes of those who list Israel as their top concern.

‘Don’t take it personally,’ Dershowitz told Trump. ‘It has nothing to do with you.

‘I think every Jew I know really admires what you did for Israel. It’s just that it isn’t necessarily their top priority.’ 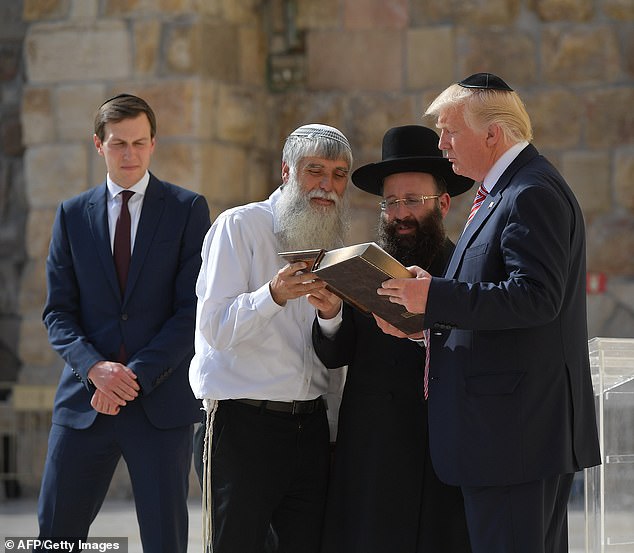 During his presidency, Trump remained a strong ally of Israel. His son-in-law, Jared Kushner (left) is Jewish and served as a senior advisor

For his statements last Sunday, The Anti-Defamation League accused Trump of ‘Jewsplaining’ in a statement to DailyMail.com.

‘We don’t need the former president, who curries favor with extremists and antisemites, to lecture us about the US-Israel relationship,’ ADL CEO and National Director Jonathan Greenblatt said.

‘It is not about a quid pro quo; it rests on shared values and security interests. This “Jewsplaining” is insulting and disgusting.’

The White House also condemned Trump’s remarks, with Press Secretary Karine Jean-Pierre saying: ‘Donald Trump’s comments were anti-Semitic, as you all know, and insulting, both to Jews and to our Israeli allies.

But let’s be clear – for years now, Donald Trump has aligned with extremist and anti-Semitic figures.’ 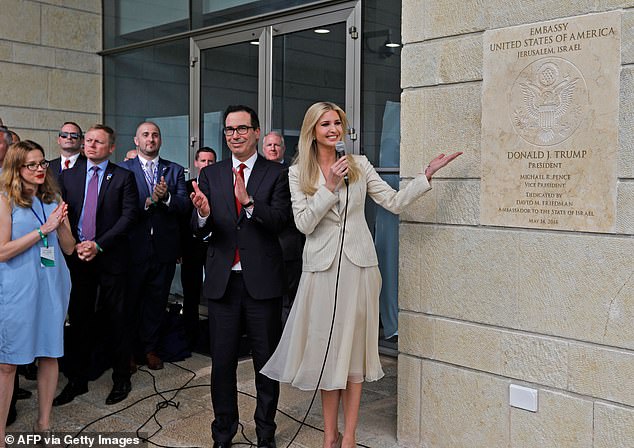 Trump’s daughter Ivanka, who converted to Judaism to marry Kushner, is seen at the unveiling of the US’s embassy in Jerusalem 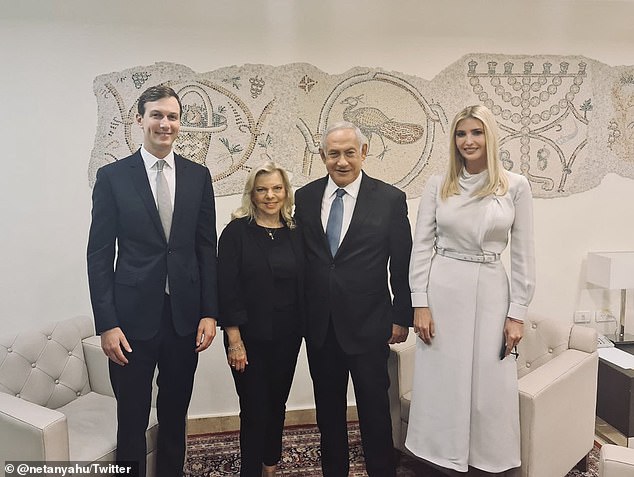 During his White House tenure, Trump had been a close ally of Israel’s then-conservative government led by Benjamin Netanyahu.

His upending of decades of US policy in the fragile region – including moving the American Embassy from Tel Aviv to Jerusalem – earned praise from conservative Jews at home and abroad.

Trump also shared a famously close relationship with Netanyahu himself, with both right-wing leaders often heaping public praise on the other.

In a show of appreciation for his support, Netanyahu named one of Israel’s controversial planned settlements after Trump.

But Jewish Americans have historically been a Democrat voting bloc, a trend that did not change in the 2020 presidential race. 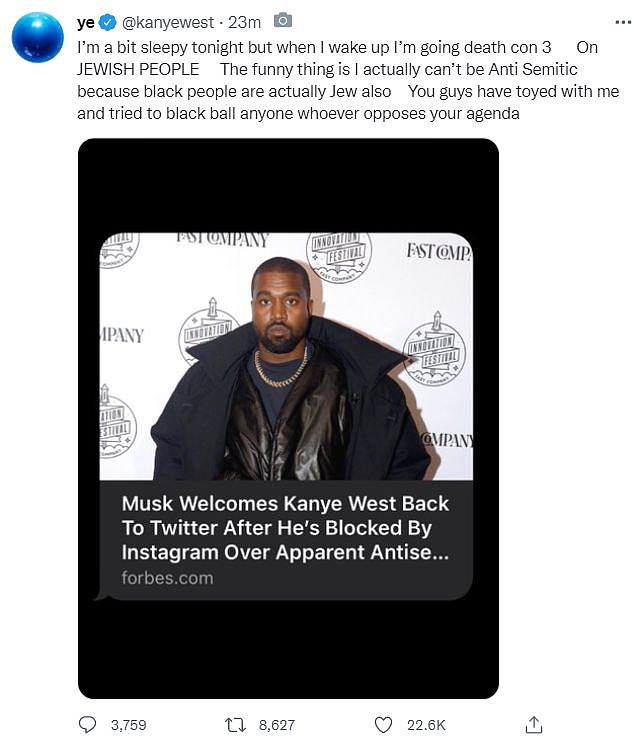 Trump’s Sunday morning tirade comes against the backdrop of a troubling rise in threats and attacks targeting vulnerable groups.

A new wave of anti-Semitism in America has prompted synagogues and other Jewish community centers to be on high alert across the country.

Rapper Ye, tweeted last week that he would go ‘death con 3’ on Jewish people, which got him removed from the site.

Some conservative pundits and members of the fringe-right leapt to his defense, claiming he was censored for exercising his free speech.

It emerged afterwards that an interview he did around the same time with Fox News’ Tucker Carlson was edited to remove wild claims, including that Planned Parenthood was created to ‘control the Jew populations’ with eugenics.