Four people have died after 14 mountaineers were caught in a storm in the Swiss Alps and forced to spend the night outside, police said.

Five are in hospital in a critical condition following the rescue operation in the Pigne d’Arolla area of the Swiss Alps this morning.

Two groups of skiers of Italian, French and German origin had been unable to reach their cabin in last night’s bad weather, police in Valais canton said. 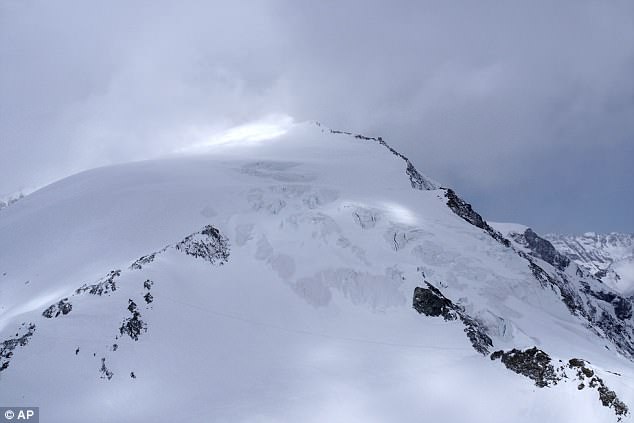 Tragedy: Four Alpine climbers have died and another five are in critical condition after becoming trapped overnight on the Pigne d’Arolla mountain near Arolla, Switzerland

Temperatures in the area dropped below -5C last night, and the mountain was blighted by wind and snow.

The manager of the cabin, located 10,358ft above Arolla, a village in Evolène, Valais canton, sent out a call for help at dawn, triggering a major relief operation that involved seven helicopters, police said.

Rescue helicopters found 13 of the mountaineers alive, some of whom had hypothermia.

One person was found dead, likely to have died following a fall, the police statement said.

The survivors were taken by helicopter to hospitals in the area but three died after arrival.

Some of those not identified as being in critical condition are suffering from ‘mild hypothermia’ but their ‘lives are not in danger,’ according to police.