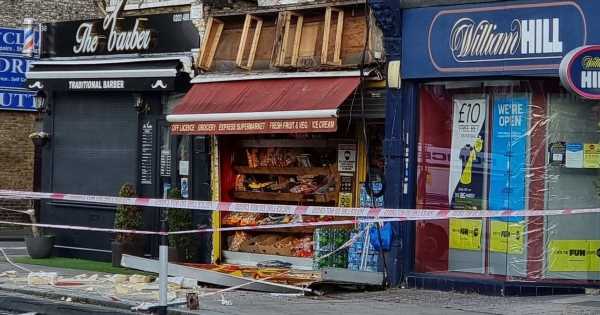 Four people have had to be evacuated from a building after it "collapsed into the street" in the middle of the night.

According to witnesses, the building in Hertford Road, Enfield, London, collapsed in the early hours of Monday, May 10, MyLondon reports.

Due to fears the building is still unstable the section of the road between Tramway Avenue and St Alphege Road was closed at around 4am.

Hertford Food & Wine, a shop on the ground floor of the building, remains closed following the incident.

Images from the scene which have been widely shared on social media show debris scattered across the pavement in front of the shop. The road is normally a busy and bustling key transport route for the north London area.

Emergency services rushed to the scene and a police cordon around the building has been put in place.

The cordon appears to also be around neighbouring properties on each side which include a barbers and a betting shop.

A spokesperson for the London Fire Brigade confirmed that four people had to be removed from the building over fears for their safety.

They said: "Firefighters were called to a wall and windows in a precarious position at a shop with flats above on Hertford Road in Edmonton this morning (Monday).

"Four people were removed from the building and a cordon was put in place as a precaution.

"The Brigade was called 2.47am and the incident was over for firefighters by 5.22am. One fire engine from Edmonton Fire Station was at the scene."

Turgut Sunalp saw the aftermath of the collapse. They told MyLondon: "I was coming from a night shift when I saw this.

"Looks like a window surrounding come loose from the main building and force the bottom part onto the shop front damaged the shop front and doorway."