New York: Fox News apologised on Tuesday for showing photos of Philadelphia Eagles players kneeling in prayer – not in protest – during a story about President Trump cancelling a White House ceremony honouring the team for its Super Bowl victory.

The 33-second report aired late on Monday with four still pictures of the Eagles shown in the background of Shannon Bream's narration. She said that the cancellation was due to "the national anthem controversy," where some NFL players knelt during the "Star Spangled Banner" last season to protest police brutality. 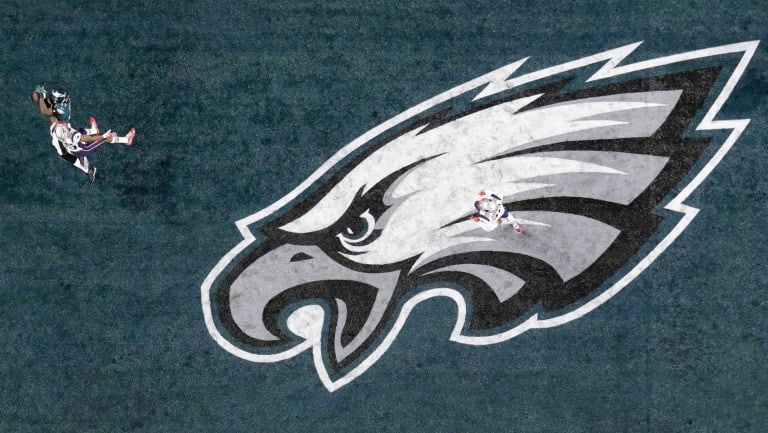 Philadelphia Eagles wide receiver Alshon Jeffery catches a touchdown pass in front of New England Patriots cornerback Eric Rowe during the first half of the NFL Super Bowl 52 in February.

"To clarify, no members of the team knelt in protest during the national anthem throughout the regular or post-season last year," said Christopher Wallace, executive producer of the 11 p.m. Eastern program where the report aired Monday. "We apologise for the error."

Fox tweeted a copy of Wallace's apology on its news account Tuesday and said the error would be addressed on the television show.

President Donald Trump abruptly cancelled the ceremony planned to celebrate the Eagles' Super Bowl victory after it became clear that the majority of players would not attend, renewing controversy over players taking a knee.

Eagles player Zach Ertz, who was in two of the pictures used by Fox during the segment, tweeted "this can't be serious.

"Praying before games with my teammates well before the anthem is being used for your propaganda?" Ertz tweeted. "Just sad. I feel like you guys should have to be better than this."

The two pictures with Ertz, one that also included teammate Corey Clements, were taken by The Associated Press. Both knelt at the goal line, heads down. The AP's photo caption said nothing about prayer or protest. In one picture, there were players in the background scattered about, a clear indication that it was not taken as the national anthem played.

A third picture used in the segment, also taken by the AP, depicted Eagles players Malcolm Jenkins, Rodney McLeod and Chris Long standing during the anthem before an October 8 game last year. Long held his right hand over his heart, while Jenkins and McLeod raised their right arms in a clenched-fist salute.

Long tweeted on Tuesday that "Fox News used the faith of Christian men dishonestly to push an agenda. That wasn't an 'error,' but intentional and strategic."

"You're complicit in PLAYING America," Long wrote. "This is just another day at the office for you, though."

Long also wrote that most players who decided not to visit the White House on Tuesday had decided long before the NFL issued a new edict last month that said players in the future would be fined if they knelt during the playing of the national anthem.

Fox News would not discuss how the error was made or whether anyone would face disciplinary action. Fox, which deleted online video copies of the error, made the correction swiftly. They've been criticised in the past for being reluctant to correct misstatements promptly.