New York: Hurricane Dorian has relentlessly pounded the Bahamas with winds of up to 300 kilometres an hour, flipping cars, toppling trees and submerging homes as it crawls towards the United States.

The hurricane came to a virtual standstill over Grand Bahama Island on Monday, local time, and is moving at just 2 kilometres an hour as it approaches the eastern Florida coastline. 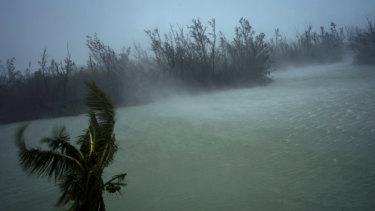 Strong winds from Hurricane Dorian blow the tops of trees and brush while whisking up water from the surface of a canal that leads to the sea, seen from the balcony of a hotel in Freeport, Grand Bahama, Bahamas.Credit:AP

Forecasters warned that Dorian could generate a storm surge as high as seven metres.

Police Chief Samuel Butler urged people to remain calm and share their GPS coordinates, but he said rescue crews had to wait until weather conditions improved.

"We simply cannot get to you," he told Bahamas radio station ZNS.

On nearby Abaco Island, Parliament member Darren Henfield said he received reports of deaths but officials had not been able to confirm them. 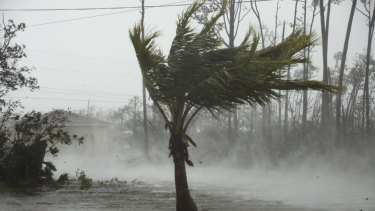 Strong wind from Hurricane Dorian blow the tops of trees while whisking up water from the surface of a canal in Freeport, Grand Bahama, Bahamas.Credit:AP

Dorian has been downgraded from a category five to category four storm but the US National Hurricane Centre warned that it remained "extremely dangerous" for residents in Florida, Georgia and South Carolina.

"Based on reports out of Abaco [islands], the devastation is unprecedented," Bahamas Prime Minister Hubert Minnis said in a post on Twitter. "Winds have decreased to 165MPH but Dorian remains an extremely dangerous storm. Our focus right now is rescue, recovery and prayer."

An 8-year-old boy drowned during the hurricane, according to reports by two local news outlets, and more casualties are possible.

"We cannot confirm those reports until we go out and have a look for ourselves."

Minister for Agriculture Michael Pintard posted a video on social media showing waves crashing against the windows of his home. 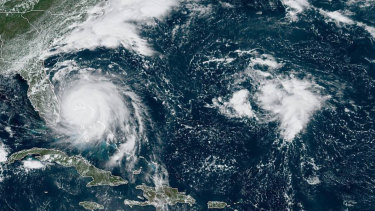 Mandatory evacuation orders have been issued for coastal communities in Florida ahead of the expected arrival of the hurricane on Monday night or Tuesday morning, local time.

Florida officials are worried locals are experiencing "hurricane fatigue" and may fail to make necessary preparations as the storm slowly approaches their state.

The National Hurricane Centre's latest models predict that the hurricane will narrowly miss the US mainland, but forecasters warn that even a slight deviation could inflict massive destruction on the coastline. 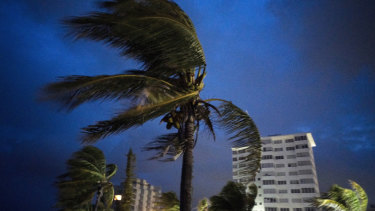 Strong winds move the palms of the palm trees at the first moment of the arrival of Hurricane Dorian in the Bahamas.Credit:AP

"On this track, the core of extremely dangerous Hurricane Dorian will continue to pound Grand Bahama Island through much of today and tonight," the centre said in an advisory issued on Monday, local time.

"Although gradual weakening is forecast, Dorian is expected to remain a powerful hurricane during the next couple of days."

Officials in South Carolina and Georgia have grown increasingly concerned about the storm's path towards their states.