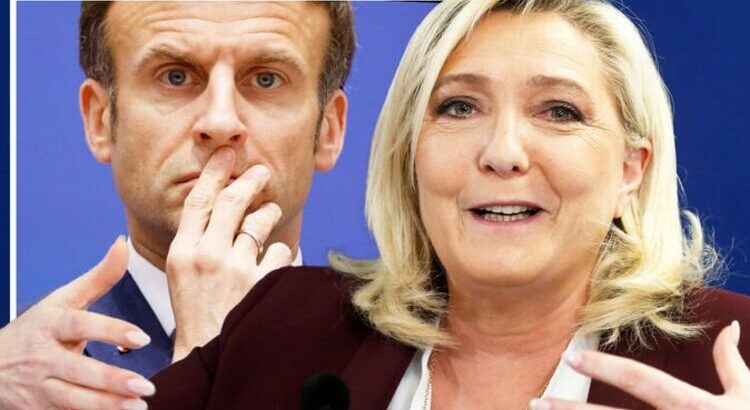 The French Presidential election is just around the corner and Emmanuel Macron could have a tougher fight on his hands than originally anticipated. The incumbent French leader is now facing rising support from both far-left and far-right candidates in the run-up to the April 10 polling day.

While President Macron is still holding on to first place in the polls, but his main rival Marine Le Pen is closing the gap between the two long-standing rivals.

The latest polls show the race is tight, with support for Ms Le Pen and left-wing candidate Jean-Luc Melenchon seeing rising support in the last week or two.

Mr Macron, meanwhile, has lost ground with voters, according to the latest poll by Ipsos Sopra Steria Cevipof for Le Monde newspaper which showed the incumbent would lead in the first round of votes on April 10, with 26.5 percent versus 21.5 percent for Le Pen in second place.

Those figures compared to 28 percent for Mr Macron and 17.5 percent for Le Pen in the last poll conducted March 21 to 24.

If no candidate wins 50 percent of the vote in the first vote, as it seems is likely, France will move to a second round – to be held on April 24.

The poll further indicated the President would then beat Ms Le Pen in the second round run-off vote on April 24 by 54 percent to 46 percent.

What’s more, a new survey by Harris Interactive this week shows Ms Le Pen could fall just three percentage points behind in the President in the event of a second-round run-off.

In 2017, Mr Macron defiantly beat Ms Le Pen with 66 percent of the vote in the second round, with only 34 percent of voters backing the NAtional Rally leader.

Why is support for Macron falling?

At first, it seemed a second term for President Macron was an absolute certainty as the war in Ukraine began in February, standing out from his political challengers as the only candidate with experience in foreign policy and the ability to lead the nation through an international crisis not seen in many people’s lifetimes.

However, support for the French leader appears to have dwindled since then.

Mr Macron has hardly hit the campaign trail in recent weeks, and has failed to appear in televised debates with his rivals.

Voters have turned to the likes of Ms Le Pen, who has used the distraction of war to hammer home her domestic policies with the French people.

She said on April 5: “I did my campaign in a serious way. I have been on the field for more than six months now, I have brought up all the subjects preoccupying the French people.”

Mr Macron also waited until last month to officially declare he was running for the top job again – something Ms Le Pen has also taken aim at.

The far-right leader has also broken with her previous style of campaigning: instead of focussing on issues like immigration, which have taken a backseat given Europe’s widespread welcome of Ukrainian refugees, and has focussed on issues that affect the everyday voter, such as rising bills and domestic issues in each region of France.