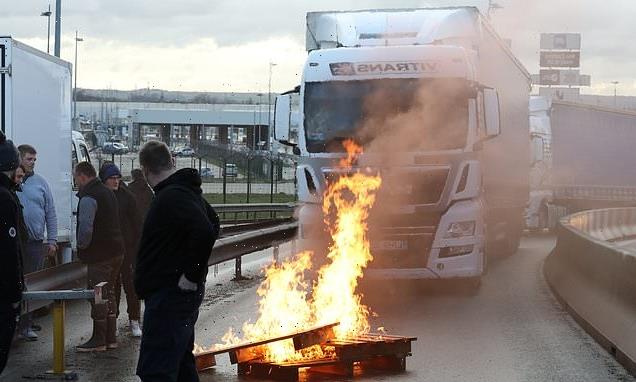 Le blockade is off! French fishermen dump threat to block Christmas deliveries to Britain… so they can have a festive break

French fishermen last night ditched a threat to block Christmas deliveries to Britain – so they can have time off over the holidays.

The U-turn comes after fishing barons had threatened for months to scupper cross-Channel trade unless the Government handed over access permits to UK waters.

Industry bosses said many skippers take time off for the festive period so they scrapped their long-standing plan to punish Britain this week by blockading ports and the Channel Tunnel.

‘The protest won’t happen during the festive period. It’s on standby. We will look at it again at the start of January,’ said Olivier Lepretre, chairman of northern France fisheries committee.

‘Some of the fishermen wanted to act on the 23rd and the others wanted to protest on the 4th after the holidays. It divided people straight away.’ 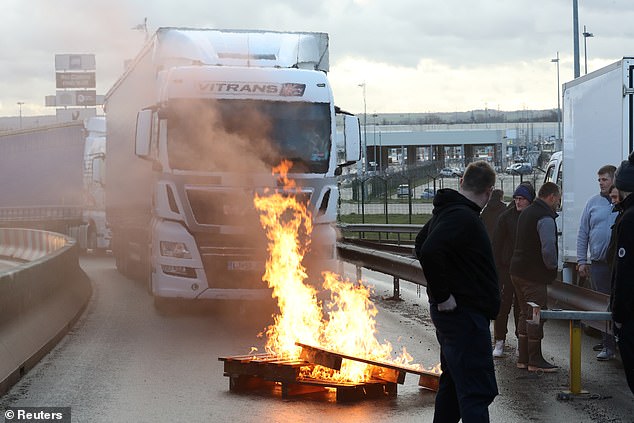 French fishermen last night ditched a threat to block Christmas deliveries to Britain – so they can have time off over the holidays. Pictured, French fishermen block trucks at the Eurotunnel near Calais in November

The threat had been focused on targeting British imports and exports, providing a further blow to the UK’s Covid-hit economy.

Mr Lepretre said there had been a 50-50 split during initial talks between members of the industry bodies that represent the interests of French fishermen.

‘Not all boats have the same level of fishing activity. The gillnetters are extremely busy up until the end of the year. And in January, it drops off. For the trawlers, it is the opposite. They stop for a bit for now and then start up again in January.’

French fishermen staged a two-hour Brexit protest on November 26, cutting off road access for freight to the tunnel and blockading three ports including Calais.

Mr Lepretre, whose boat is one of those that has failed to secure a permit, said he asked president Emmanuel Macron last week to slap extra checks on UK vessels.

‘These checks do not have to be the hardest possible, but we do want there to be pressure on the British,’ he said.

He added the president promised the checks will come into effect on January 1 and could include tougher customs procedures and stricter sanitary inspections in French ports.

Having failed to convince Britain to hand over the contested licences, France on Friday vowed to sue the Government at a special arbitration panel set up under the Brexit trade deal with Brussels. 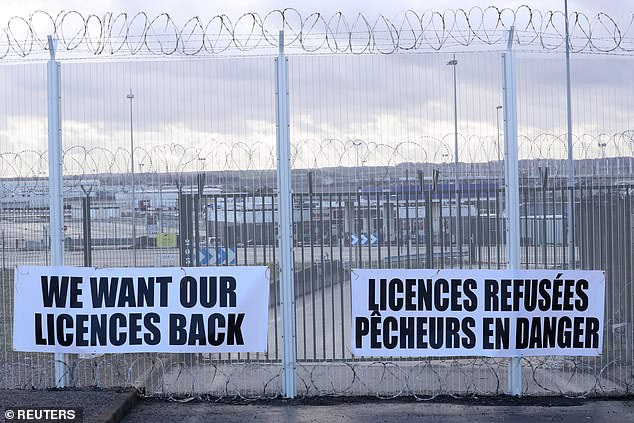 Paris claims Britain is deliberately withholding 73 permits from its skippers, who enjoyed unfettered access to UK waters while it was a member of the bloc. But French officials also admit they have received 93 per cent of the more than 1,000 they applied for.

The European Commission is expected to respond later this week, although Downing Street sources are confident of victory.

Under the Brexit deal, both Britain and the EU can ask for the other side to be hit with punitive measures if they can convince the arbitration panel they are failing to honour the pact.

A win for France could see heavy tariffs slapped on British fish exports to the EU, or even UK trawlers banned from fishing in EU waters. Eurocrats will consult the other 26 EU governments before deciding whether to go ahead with the legal proceedings.