French writer and philosopher Jean-Paul Sartre said it would come down to a “hegemony of Germany, and for a while of France” where other countries in the bloc would “eternally oppressed”. He even appeared to hint at Britain’s momentous Brexit decision saying Britain would be “ready to make their own market”.

Writing in 1977, Mr Sartre said: “The Europe presented to us by Carter, Schmidt, Giscard and Andreotti has no relationship with proletarian internationalism, it is foreign to the Europe of the workers which for a century was the ideal of the Western labour movement.

“I find silly this enthusiasm for the European elections and the Economic Union.

“In the end, it will all come down to hegemony of Germany, and for a while of France, with the countries of the south are eternally oppressed and the British who will be defeated by their own arrogance, ready to make their own market.” 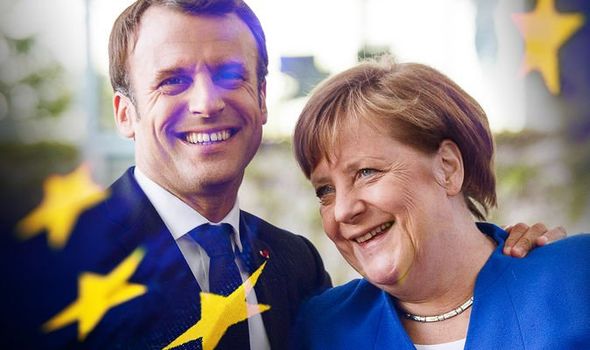 Germany and France are considered to be the two most influential members of the European Union and are the top two economies of the Eurozone.

Former enemies who lost millions of lives in wars in the last century, they form the backbone of the historic, integrationist core of the European Union and their relationship remains vital to bloc’s future.

Over the years, France and Germany have marked the shifting teutonic plates of power within the bloc with the two countries re-emerging as the driving force of the union.

The move reflected efforts to give fresh impetus to Franco-German relations in the aftermath of Britain’s decision to leave the Brussels bloc.

After Brexit, the leaders themselves signalled the EU will be going through a period of change and presented a blueprint for much-needed democratic overhaul.

But experts say the relationship between France and Germany ‒ and their leaders President Macron and Chancellor Merkel ‒ has since suffered.

Mark Leonard, the director of the European Council on Foreign Relations, told The Guardian in December: “The Franco-German relationship is the single most important relationship in the EU and it’s in a totally toxic condition.

“And it’s going to get worse before it gets better.”

Francois Heisbourg of the International Institute for Strategic Studies said:“Germany is in political paralysis, incapable of taking a major decision, and will probably remain so until elections in September 2021.

“Hence Macron’s frustration: France has ideas; Germany is sticking its fingers in its ears.”

The French president needs Berlin’s support if he is to succeed in deepening cooperation on matters ranging from border control and immigration to European defence and fiscal policy.

Yet with Ms Merkel’s power diminished as she heads towards the exit, Mr Macron himself preoccupied by months of “yellow vest” protests against his economic policies, and Europe distracted by the coronavirus crisis Brexit, the momentum for reform that he had sought is largely lost.