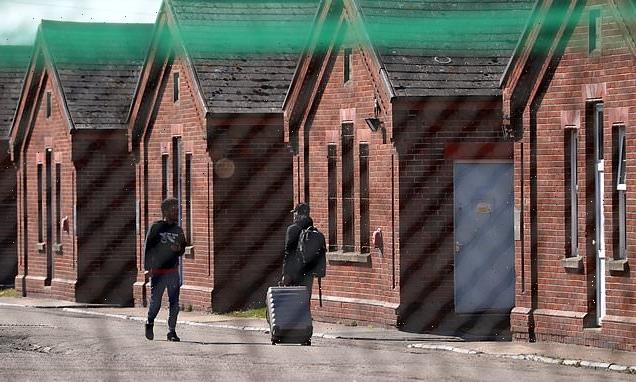 Cases of Covid-19 have once again been identified at a military barracks being used to house asylum seekers, several months after a major outbreak at the camp.

Four dormitory blocks are in isolation after three cases of the virus were found at Napier Barracks in Folkestone, Kent.

Nearly 200 people at the site contracted coronavirus earlier this year, leading to accusations that health advice had been ignored. 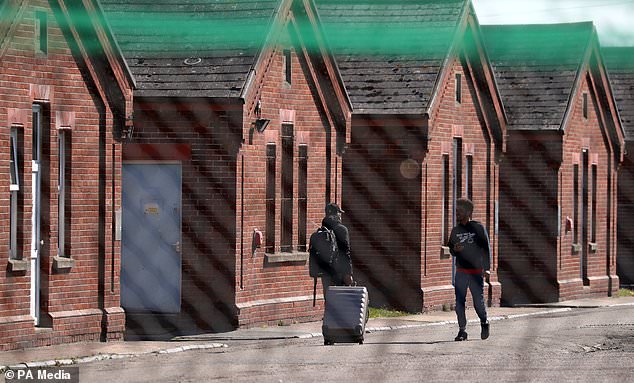 Cases of Covid-19 have once again been identified at Napier Barracks in Kent, months after a major outbreak at the site 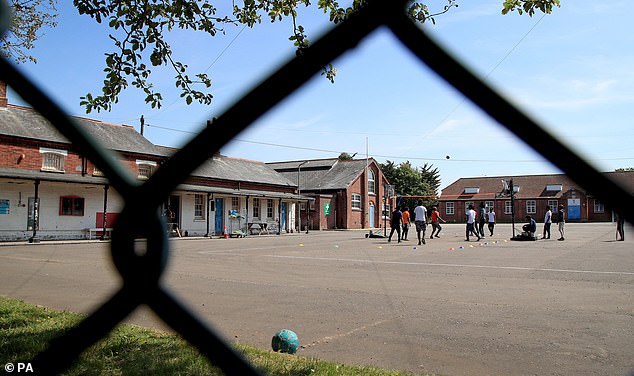 Almost 200 people contracted Covid-19 while being held in the camp in Kent, pictured

The site has been dogged by allegations of poor conditions in communal dormitories, with inspectors describing an isolation block as ‘unfit for habitation’.

The Home Office insisted again on Thursday that it would be an ‘insult’ to suggest that Napier Barracks is not ‘adequate’ for asylum seekers.

New transfers to the barracks were halted after a High Court judge in June found the accommodation failed to meet a minimum standard, but resumed about two weeks ago, PA understands.

The number of people at the site, which features dormitory-style accommodation, is around 230 as of Thursday.

The department confirmed that those who tested positive have been removed from their dormitories but could not say if others are self-isolating.

A spokesman said: ‘All appropriate Covid protocols are being followed in accordance with Public Health England advice to manage the small number of cases currently at Napier Barracks.

‘While pressure on the asylum system remains, we will use Napier Barracks to ensure we meet our statutory duty.’

Clare Moseley, founder of migrant charity Care4Calais, said: ‘It’s no surprise that cases of Covid have been found in Napier Barracks.

‘It’s disappointing that credible evidence has been ignored for so long and this Government is determined to house vulnerable people in Napier.

‘The people we work with in Napier are afraid of not being able to protect themselves and we understand their fear. It’s obvious that the barracks must close as soon as possible.’

Steve Valdez-Symonds, refugee and migrant rights director at Amnesty International, said: ‘Once again Napier Barracks is in the news for a Covid-19 outbreak because the Home Office continues its reckless policy of holding people in this wholly unsuitable accommodation.

‘No-one should be forced to live in these squalid and inhumane conditions, certainly not people suffering serious trauma from the tortures and terrors they have fled and endured on journeys to seek safety here.

‘This latest outbreak only adds to the sense that Home Office ministers have lost all sight – or indeed care – for the people involved.’

Last month, Home Secretary Priti Patel and Home Office officials defended their decision to continue using the site to MPs as they confirmed that half of the people living there are sleeping in dormitories.

Questions have also arisen in recent weeks about the future of the Ministry of Defence-owned site, with MPs and peers told it could be used to house asylum seekers for ‘another couple of years’.