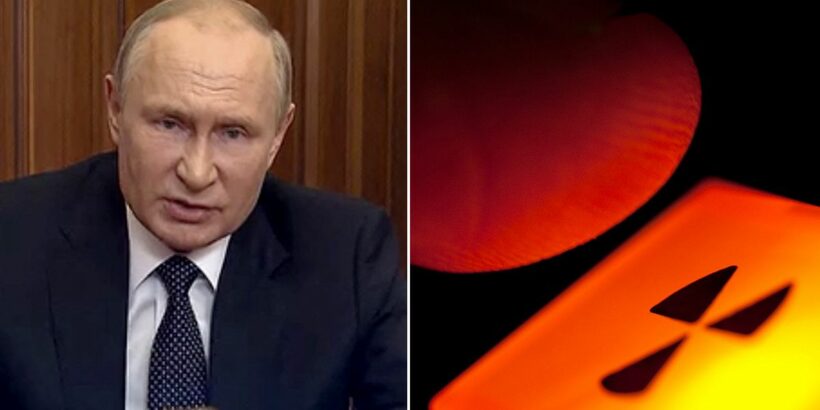 Russia is becoming increasingly likely to use nuclear weapons as its army falters in Ukraine, a former RAF Airmarshall has predicted as he issued a terrifying warning to the West in an exclusive chat with the Daily Star.

Putin’s invasion of Ukraine has not gone well.

Major counteroffensives have seen Ukraine take back 6,000 square kilometres of land, while Russia's own spearheads have been blunted.

Putin’s forces have failed at multiple points across the campaign which has led to a huge conscription drive in an effort to save the 'special military operation'.

In reality, though, the more Russia fails and Ukraine succeeds, the greater the chance of Putin turning to more drastic measures becomes, an expert has claimed.

Ukraine is being restrained by its allies who fear that the more Russia fails, the more a nuclear war becomes an option.

“What the Americans are trying to do there is avoid the situation where the collapse of the Russian forces is so dramatic and consequential that Putin now feels that he cannot defend Mother Russia,” he told the Daily Star, “and he would now be justified in or panicked into using a nuclear weapon.

The reason for this, Edward says, is because of a very specific mindset that Putin may be adopting the more pressure he comes under.

“It is fair to say that the way the war develops, the more frightened Putin feels, then, the more he himself may do something reckless.”

Mr Stringer said that Putin will feel there may be a way out of trouble by opting to use a policy of “escalate to de-escalate” – the idea of making everything so big and scary that your enemies back down.

Explaining, the UGSS senior associate said: “If you're cornered by three people holding knives and you bring out a gun and fire some shots in the air, they go okay, he means business, he will shoot us.

“And so you win the knife fight by bringing out a gun.”

“I'd say it's equivalent of stopping a fight in the pub by glassing someone in such a horrible manner that everyone thinks you're mad and loony and then everybody backs off because you've suddenly done something so shocking that everyone's scared you might do it to them next.”

He added: “Putin will be calculating that he might be able to use a nuclear weapon, shock the West and be able to negotiate."

He added in this situation he might bargain that "the West won't see the use of a small battlefield nuclear weapon as something that's worth engaging in an exchange of strategic nuclear weapons – which is Armageddon.”

Despite making clear that the threat was still low, he added: “So that's why this is so serious.”

He said this was the first time “Politicians, policymakers in the West are seriously considering all their options around the possibility of nuclear conflict.”

The nuclear question is “in the foreground” and while people discussed it often in the past it was in times of relative peace – back then it was just the “theory of nuclear deterrence.

“Now, the war has actually happened as a conventional war.

"Putin assumed it would be three or four days long, and he would present the west with a fait accompli, that hasn't happened and so now we've got to the situation where Russia could feel badly threatened.

"Therefore, nuclear weapons and their use in something that's actually happening today, is, as I say, probably exercising minds for the first time since the Cuban Missile Crisis in 1962.”