Known as "God" and "Emperor" to his underlings, the yakuza crimelord sent a hitman to ‘whack’ a nurse involved in the procedure. 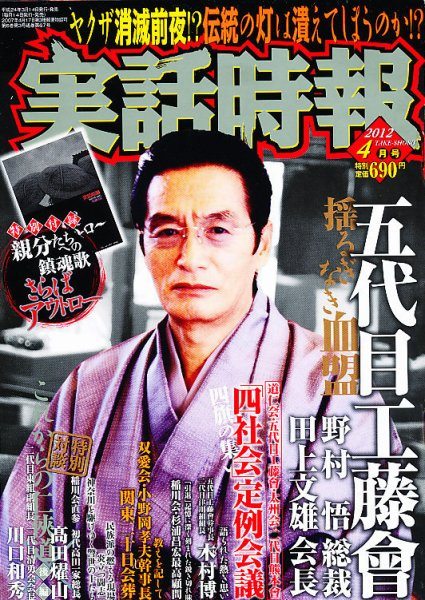 Now ruthless Nomura’s dented masculinity has been his undoing.

The don of the Kudo-kai syndicate has been sentenced to hang for being behind the attempted hit and two other attempted murders.

He was also found guilty of ordering the slaying of the head of a fishing cooperative who refused to bend to the mob's will.

You'll regret this for the rest of your life"

In true Hollywood style, heavily-tattooed Nomura cursed the judge: "You'll regret this for the rest of your life.”

The mob boss has appealed. It could take years to decide whether he’ll cheat the hangman’s noose.

Yet, the high security trial is being seen as a watershed moment in Japan’s fight against organised crime.

It’s the first time that a yakuza boss has been sentenced to death in a Japanese court.

They pride themselves on stamping out petty crime and were once tolerated as a necessary evil by the authorities.

Some believed the rigid structure of the yakuza families meant crime in Japan was kept to mob on mob violence. 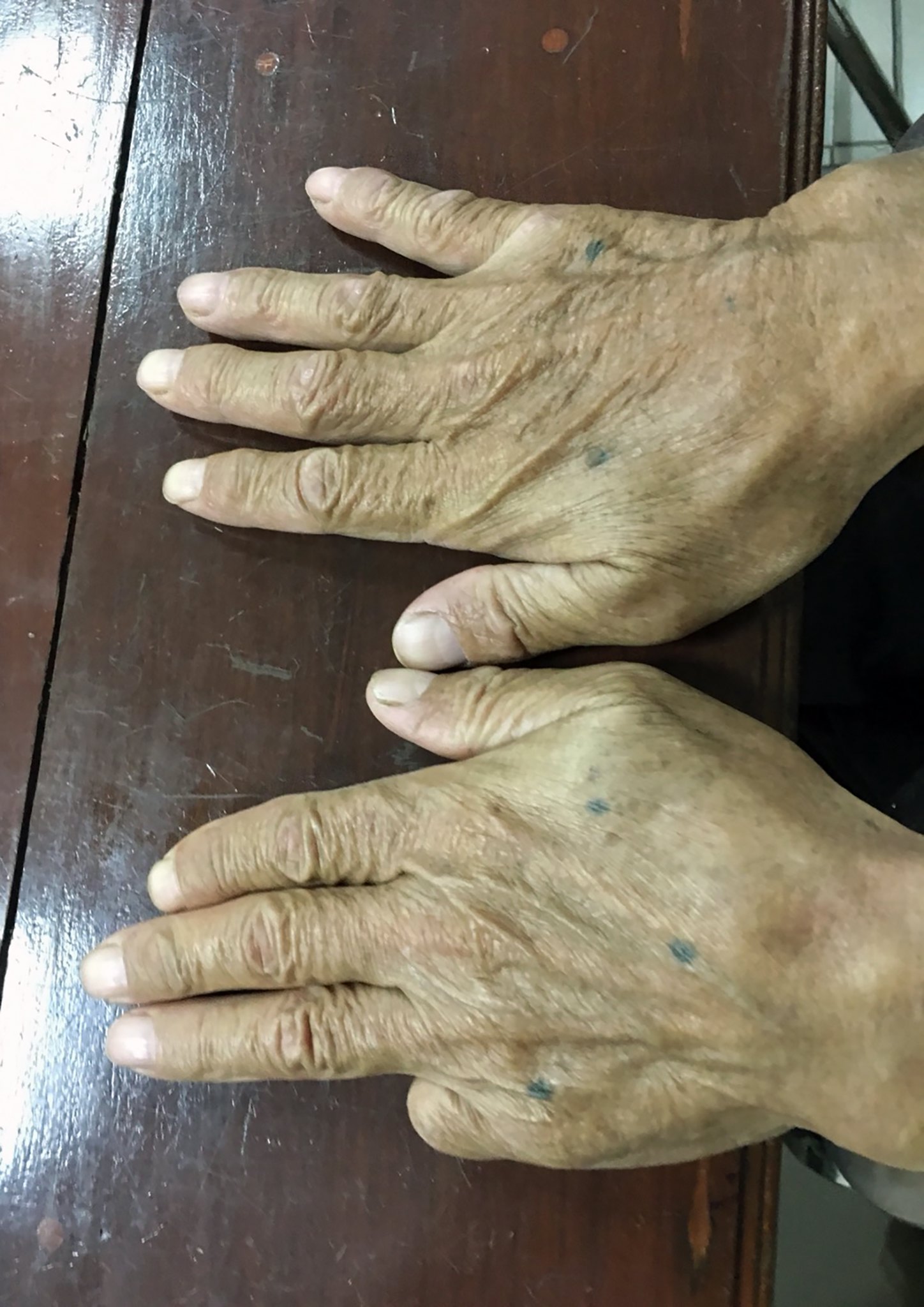 Nomura’s 2013 ‘hit’ on the female nurse following his penis enlargement revealed that to be a fantasy.

A Nomura henchman stabbed the medic in the head after she had helped with the godfather’s after-care following the surgery and a procedure to remove hair from around his crotch.

She was said to have treated Nomura the same as any other patient.

When he complained of being in pain, she told him:  “This can’t possibly hurt as much as getting one of those yakuza tattoos.”

This can’t possibly hurt as much as getting one of those yakuza tattoos.

Nomura felt slighted. The nurse was lucky to survive the attempted murder.

Custom once dictated that yakuza bosses who order a hit would make a large payment and a grovelling apology then remain free. The henchman who carried out the assassination would do the time.

It appears Japanese authorities are cracking down on mobsters who target ‘civilians’ rather than rival criminals.

Yakuza have long insisted they adhere to a strict code of honour passed down from the samurai warriors of the 17th and 18th centuries.

They follow the ritual of yubitsume – where a footsoldier who offends a boss or suffers defeat in a turf battle cuts off the tip of his little finger to make amends.

Traditionally, this would weaken the man's grip on his sword, making him more dependent on his leader.

Underlings hand over the severed digit to their boss who may keep it as a trophy.

In 2013, one reformed gangster told how he spent thousands on prosthetic fingers after hacking off the digits to appease his one-time mob bosses.

Toru, who ran a protection racket in Tokyo's red light district, fell foul of mob bosses when one of his gang – known as a “brother” – began stealing and using drugs.

So Toru sliced off the top of his left little finger to placate his seniors.

But then another underling brother messed up and Toru had to pare back the little finger to its second joint.

Toru – not his real name – explained: "The first joint of a little finger can be sliced easily.

The first joint of a little finger can be sliced easily

“You tie the bottom of it with thread tightly and put your body weight on a kitchen knife. But the second joint was tougher than I thought."

A brother helped out by standing on the knife and slicing through the knuckle.

He went ‘straight’ after falling in love. His prospective wife insisted she wouldn’t marry a yakuza.

The mob demanded a sacrifice from Toru quitting their ranks – his ring finger.

Toru added: "I tried to do it as usual with a kitchen knife, but the blade didn't go through because of the muscle."

The famous yakuza tattoos can also be a gangster’s undoing.

In 2018 fugitive yakuza Shigeharu Shira, then 72, was arrested in Thailand after a cop recognised his inkings after a passer-by’s photo of his “cool” tattoos went viral.

A Thai local posted photos of the frail-looking yakuza playing a streetside checkers game with his intricate gang tattoos on show and a missing little finger.

“I had to ask a brother to take a hammer and a chisel to lop it off. Oh, it was painful."

He had been on the run for 14 years, fleeing Japan in 2003 after allegedly killing his deputy and being involved in several bloody battles with rivals. 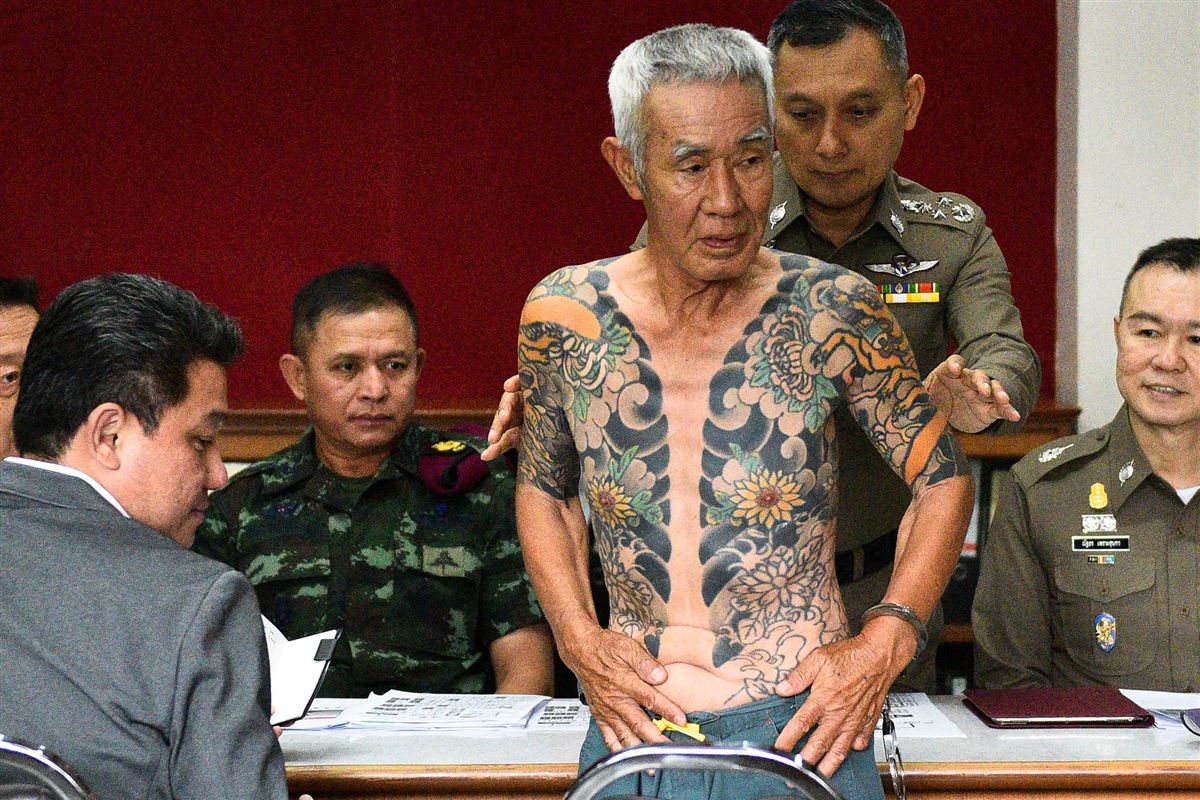 Yakuza flourished in Japan’s chaotic post war years, boasting 180,000 members spread across more than 20 ‘families’ in the 1960s. The American Mafia only had an estimated 5,000 members at its peak.

They became known for their signature look of dyed hair, shades and sharp-tailored suits.

Often they wear a Hawaiian shirt beneath their suits, unbuttoned to show the excruciatingly painful hand-inked tattoos.

The yakuza’s success saw them move into construction, real estate and the stock market  – with allegations of links to politicians.

They were even praised for helping the 2011 earthquake and tsunami relief funds, sending trucks from the Tokyo and Kobe regions to deliver food, water, blankets and toiletries to evacuation centres in northeast Japan.

Their aid reached the needy quicker than that provided by the Japanese authorities.

But the mob syndicates had over-reached. The move from drugs and prostitution to the corporate boardroom, property and finance threatened the Japanese elites.

The uncertainty of the post war years are long gone. The authorities have little use for the yakuza now.

Tough new anti-yakuza laws were passed in the 1990s, with longer sentences putting off new recruits. 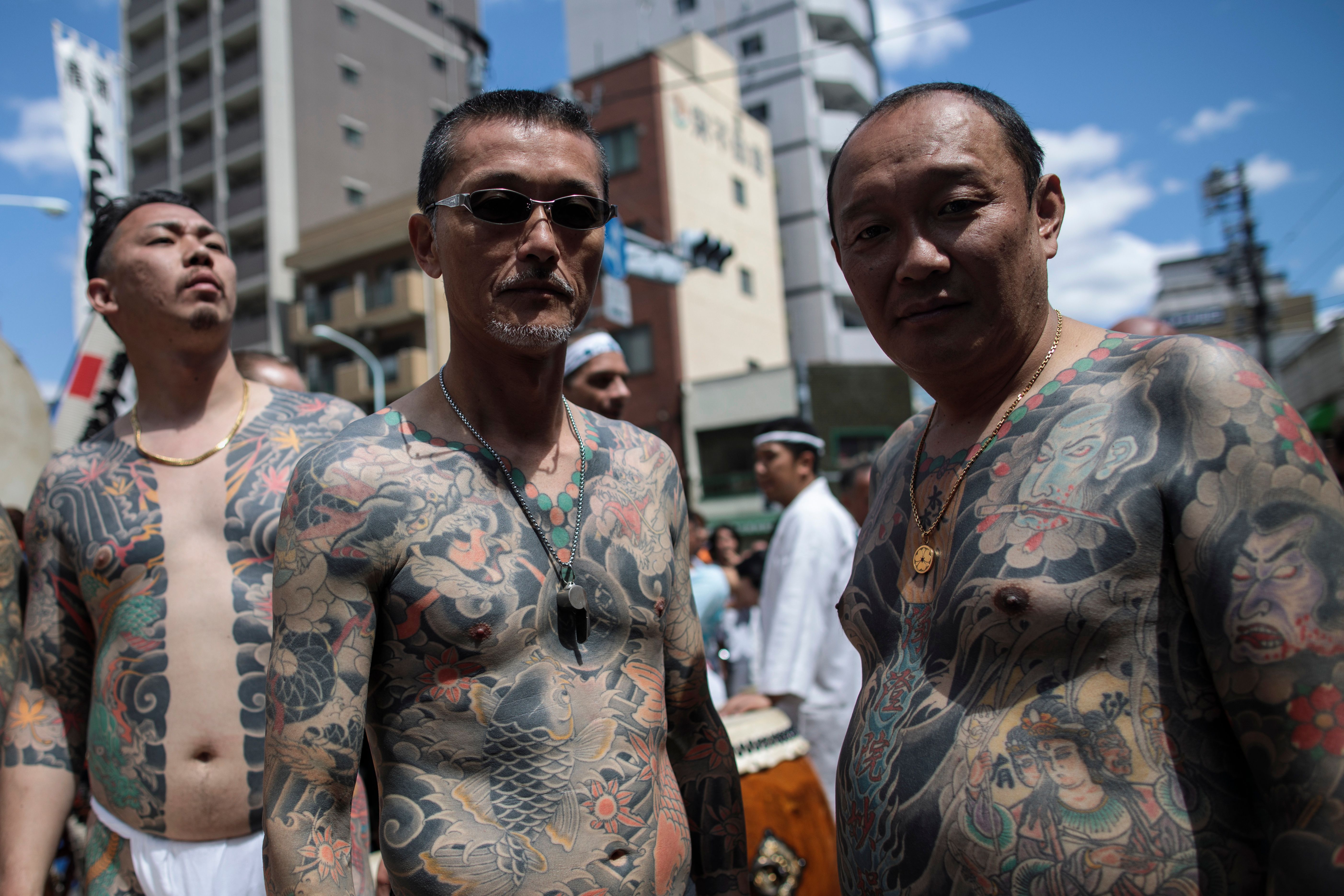 Today there are only around 25,000 yakuza left. Half of those that remain are over 50.

The mob has moved into organ trafficking and even child pornography.

Former yakuza gangster turned Buddhist monk Gijin Kobayash said: “Certainly in the old days they protected the weak from the strong but it's different now.

Yakuza tell lies, they live as pimps by using women. They use cocaine, threaten people, and extort money

“Yakuza tell lies, they live as pimps by using women. They use cocaine, threaten people, and extort money. Honestly, I did that.”

Convicted killer Shinji Ishihara was an old-style yakuza who served 30 years in jail who has no time for the new breed of gangster.

Now reformed, he sliced a rival mobster with a samurai sword then watched him bleed to death.

He revealed: "He was ripping me off when we were gambling. I was cheated. I stabbed him with a Japanese sword and killed him.

“There are no rules when it comes to the Yakuza doing business. They'll do anything to make money.”

Now the authorities are coming for swaggering yakuza dons like Satoru Nomura – he of the penis enlargement op.

Favouring bespoke suits and a Mercedes-Benz, Nomura, 74, was arrested at his luxury mansion in Kitakyushu, western Japan, in 2014. He was soon bailed.

The youngest of six children in a rich farming family, he fell into gambling and petty crime as a teenager.

He joined the Kudo-kai – Japan’s most violent yakuza ‘family’ – in his 20s rising to become its godfather.

Based in the port city of Kitakyushu in Fukuoka prefecture, the syndicate has been accused of terrorising ordinary people for decades. 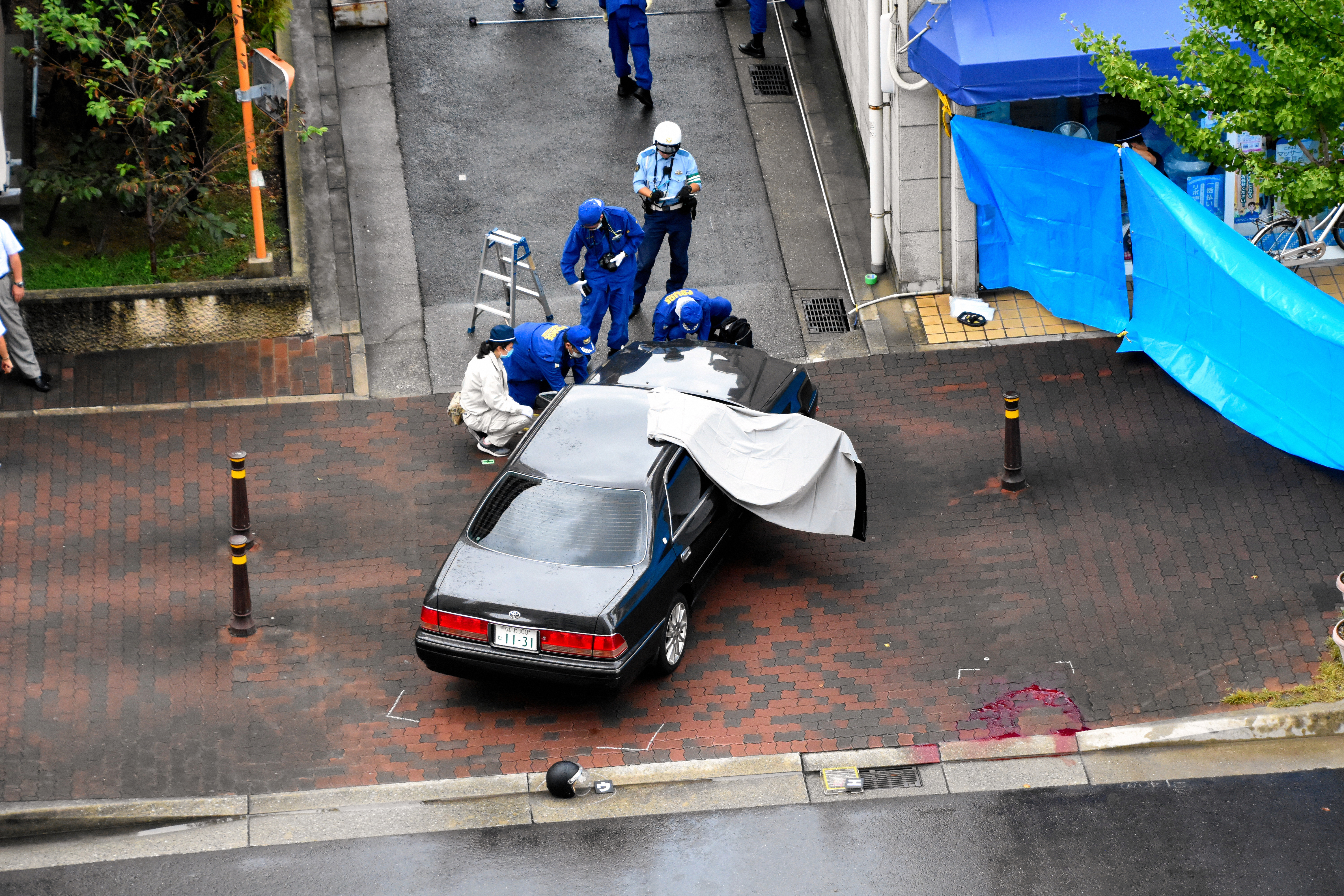 They ran protection rackets – with those resisting subjected to ferocious vengeance.

Restaurants who refused Kudo-kai's overtures were targeted with arson attacks.

In 2003 the Kudo-kai were accused of lobbing a hand grenade into a nightclub in Kitakyushu, injuring 12.

Nomura was arrested alongside No2 Fumio Tanoue. They were accused of ordering the murder of a 70-year-old leader of a fishery cooperative in 1998 who refused to do business with them.

In 2014 they were accused of masterminding the stabbing of the grandson of the late fisherman and the 2012 attack on a retired cop probing Kudo-kai who was shot in the leg.

The syndicate henchman responsible for the attacks had all been previously dealt with by the courts.  Now the godfathers were in the dock accused of ordering the hits.

There was no direct evidence connecting Nomura and No2 Tanoue to the crimes but they were convicted on August 24.

Now Nomura is facing the death penalty while Tanoue, 65, was given life behind bars.

The beginning of the end, perhaps, of Japan’s gangsters’ paradise.