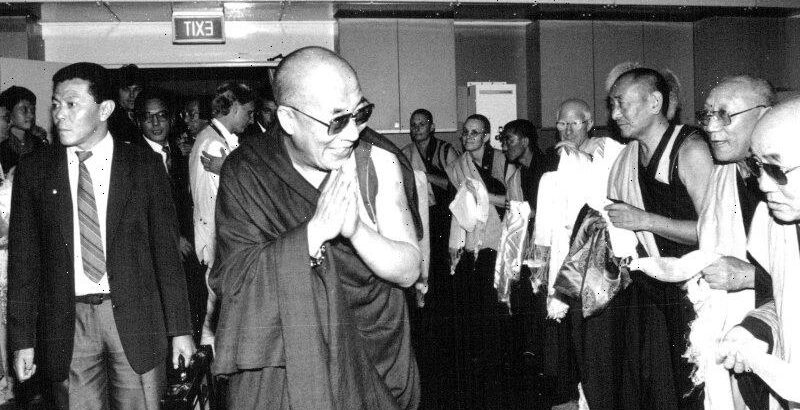 ‘Human beings are not machines’

About 15,000 people last night filled the National Tennis Centre to witness one of the paradoxes of our times — the leader of Tibet, a torn and ravaged country, preaching hope and compassion. 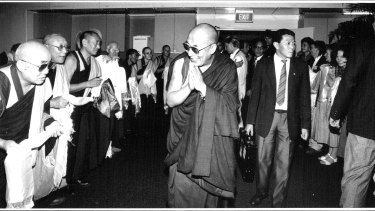 The Dalai Lama arrives in Sydney for the start of his Australian tour in 1992.Credit:Steve Christo

“Human beings are not machines,” said the Dalai Lama, “we are something more. We have feeling and experience. Material comforts are not sufficient to satisfy us. We need something deeper — human affection.”

He said that a belief in love, expressed through the medium of compassion, was basic to all religions. However, there were two prerequisites for religious people who wished to make “an effective contribution” to society. First, the individual must practise his or her religion sincerely. “Wherever you are, your religious teaching must be there with you.”

The second was to recognise the importance of religions other than one’s own. “Pluralism is very important. The survival of one religion now depends on the others. What is needed is genuine mutual respect.” He spoke of his admiration for the American priest and writer Thomas Merton, and what be had learned from other religions. He said he alto knew Christians who now used Buddhist ideas and techniques. 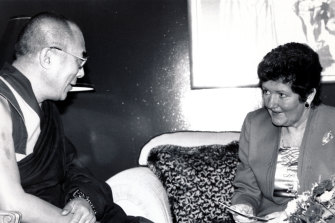 He acknowledged the great risk attached to religion, that divorced from compassion “the only remedy (for the world’s problems) becomes a source of conflict. That is a disaster.” He also acknowledged that the great majority of the world’s population has no interest in religion. “That is the individual right. But these people also desire a happy, peaceful life. So long as you are a human being, you need human compassion.”

He told of meeting the President of the US, George Bush, and hearing of the New World Order. “New World Order with compassion, very good,” he told Mr Bush. “New World Order without compassion, not very sure.” To Tibetan thinking, be said, war was overwhelmingly negative, entailing death and misery. In the case of the Gulf War, he acknowledged that Saddam Hussein had been “negative, a dictator and bad, but who supplied his weapons?“. In the Buddhist scheme of cause and effect, those people also had a responsibility.

In response to a question from the audience, the Dalai Lama said technology had great positive potential and had done much to bring the people of the world into closer contact. “But it must be controlled by the human mind and human feeling.”

He was also asked how he reconciled being a Buddhist monk with his political role. “We have to have some for of politics,” he replied.” “Politics is a form of resolving conflicts. Polities which comes from a sincere motivation is constructive.”