Not just for dogs! Hilarious moment CAT freaks out when its owner uses a sheet to disappear after being inspired by #WhatTheFluffChallenge for pups

Last week social media was awash with dog owners confusing their pets in the name of the #WhatTheFluffChallenge.

Now cat lovers have got in on the action.

This rib-tickling footage was taken in Utica, New York by Jordan Erario and shows him sending his cat into a frenzy using sleight of hand.

The challenge – essentially a game of peek-a-boo where owners hold a sheet in between them and their pet before throwing it in the air and running away – makes it seem as though they have disappeared.

Utilizing a large grey sheet Jordan appears to vanish in front of his cat’s eyes.

As he launches the sheet his cat pricks its ears and by the time it lands on the floor Jordan is gone. 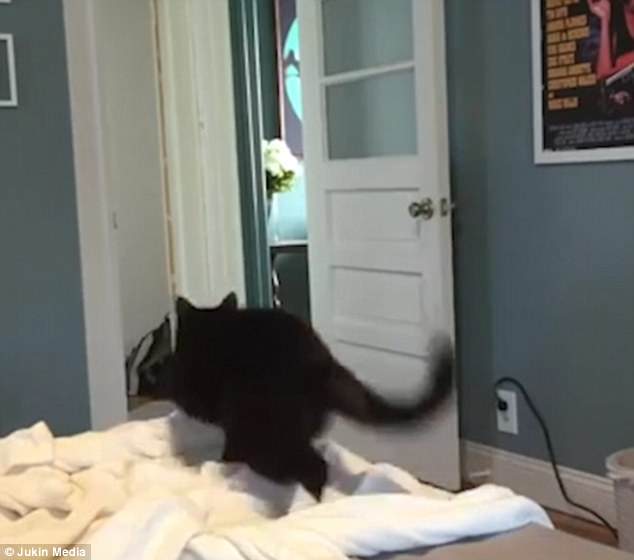 The cat leaps from the bed in search of its owner, who has vanished from the doorway 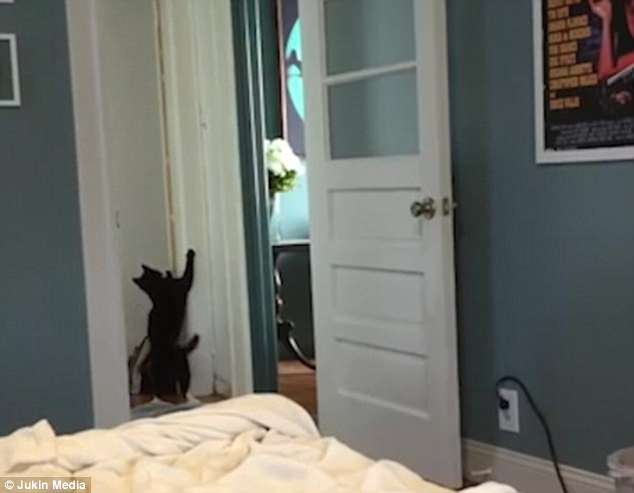 His feline friend pauses for a second the leaps to its feet, running over to where its owner had been standing.

It anxiously paws at the door post then runs in a circle before mewling loudly for its owner to return.

Jordan admitted he had been inspired by the #WhatTheFluff challenge and wanted to do a version for cat lovers.

He said: ‘I had seen the challenges on social media and thought they were funny, but they all were with dogs. So I decided to see what would happen if I did it with my cat.’