This is the shocking moment a furious cyclist’s face contorts in anger and he smashes his hand down on a car bonnet after a driver brakes late to avoid him.

A pregnant teacher, 32, who wishes to remain anonymous, was driving along Streatham High Road in south London on November 12 on her way to work.

Footage captured on a dashcam shows her turning right and braking in time to avoid a collision with an oncoming cyclist. 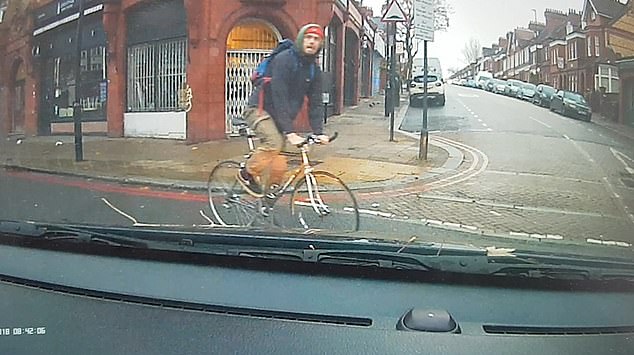 A cyclist stops in front of the car after a pregnant teacher, 32, stopped on Streatham High Road in south London to avoid a collision

But the cyclist stops in front of the car, clenches his fist into a ball and contorts his face in rage.

He gesticulates towards the road and then glares into the drivers eyes in a menacing manner.

The teacher can be heard in the clip saying: ‘I’m waiting here, I was waiting for you to go.’

But the cyclist smashes his hand down on the bonnet of the car in a fit of rage because furiously taking off.

The woman driving the car said she was so ‘distressed’ by the incident that she was forced to take the day off work.

She said: ‘I felt so distressed, upset and angry – he damaged my new car. 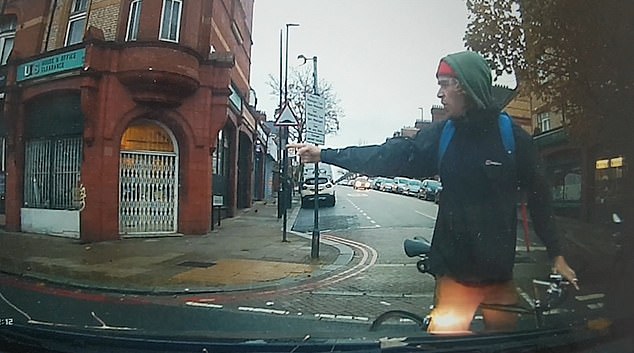 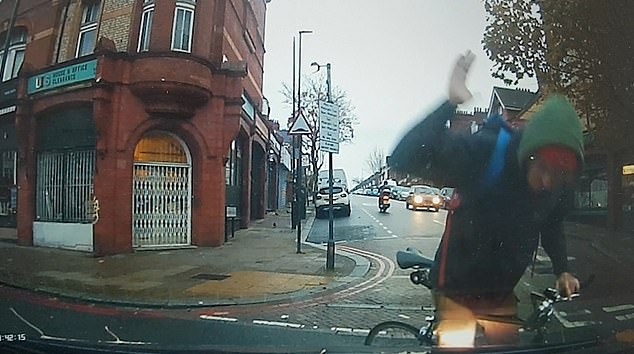 ‘I called my husband after this incident as I was very stressed and am currently three and half months pregnant.

‘I felt targeted as there was a motorcyclist also turning right – he looked around before being aggressive.

‘I had to leave the car in Streatham and my husband picked me up as I was in shock of the cyclists over reaction.

‘I was probably in a protection mode over my baby and called into work and took the day off under my midwifes instruction as I was beginning to get severe cramps.

‘I have never have seen an overreaction of this sort before from another cyclist or road user.’ 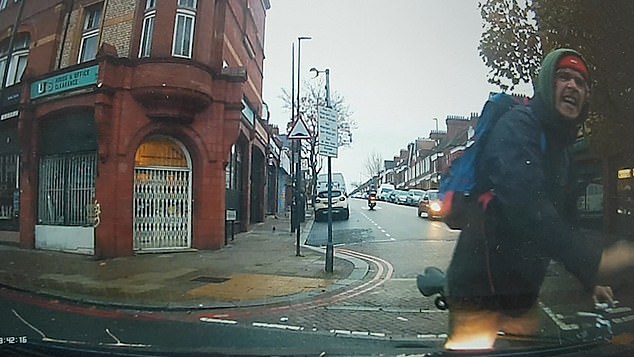 Looking angry, the cyclist furiously takes off after the shocking encounter