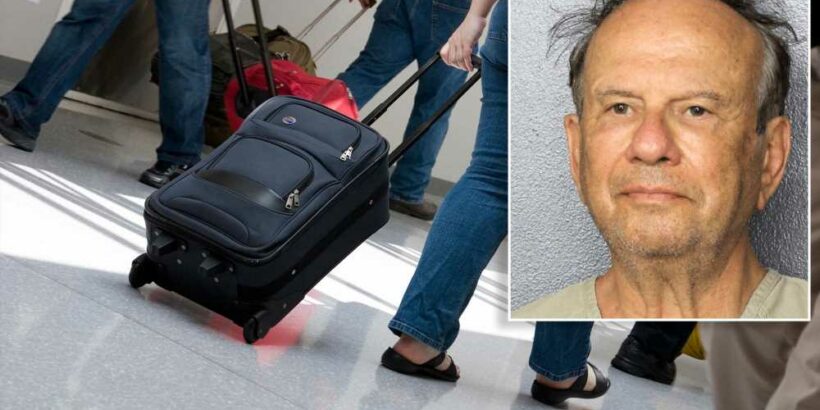 Florida woman busted after refusing to wear mask on flight

An Air Canada passenger enraged over a carry-on fee told an agent he had a bomb in his bag — prompting delays and cancellations to dozens of flights and shutting down a Florida airport for hours over the unfounded threat, authorities said.

Wegal Rosen, a 74-year-old resident of Toronto and Deerfield Beach, Florida, was arrested Saturday hours after he got into a “heated verbal dispute” with an Air Canada agent at Fort Lauderdale-Hollywood International Airport, according to the Broward County Sheriff’s Office.

“During the dispute, Rosen attempted to walk away from the ticket counter located in Terminal 2 without his carry-on luggage,” deputies said in a statement. “The employee advised Rosen that he needed to take his luggage with him, and he responded by telling the employee there was a bomb in the bag.”

Rosen then fled, leaving his carry-on luggage behind while proceeding to Terminal 3. Bomb squad deputies responded to the airport, ultimately sweeping and evacuating Terminals 2, 3 and 4 before the threat was deemed unfounded as Rosen was taken into custody, deputies said.

Instead of a bomb, investigators found a CPAP machine inside Rosen’s carry-on bag to help him with sleep apnea, according to a police report obtained by the South Florida Sun Sentinel.

Eight flights were canceled and another 50 were delayed due to Rosen’s alleged false bomb threat. He faces up to 15 years in prison if convicted, according to the report.

Rosen was allegedly infuriated after an Air Canada employee told him the airline has a no-cash policy, meaning he needed to go to Terminal 3 to buy a Visa card to pay the carry-on fee, the newspaper reported.

A lawyer for Rosen, who appeared before a judge Monday, said he was heading home to Toronto for a cardiologist appointment when the incident occurred at about 8:30 a.m. Saturday.

“He said the magic words you do not say,” Rosen’s attorney, whose full name was not available, told Judge Tabitha Blackmon, according to the Sun Sentinel.

Prosecutors reportedly concurred with that assessment.

“Obviously it would be very concerning if he did have an explosive device, your honor, but anybody — anybody — in our society knows what the impact is of making a statement about having a bomb in the airport,” Broward County Prosecutor Eric Linder told Blackmon.

Rosen remained in jail Tuesday on $20,000 bond, online records show. He’s free to return to Canada as his case continues, but cannot fly out of Fort Lauderdale-Hollywood International Airport to get home, Blackmon said.

“To get back to Canada, he’ll have to go through Miami, West Palm Beach or any other county,” Blackmon told Rosen in court.

A message seeking comment from Air Canada reps was not immediately returned Tuesday.