Families grieving the loss of a loved one are to be hit by a ‘death tax’ of more than £100, adding to the already huge cost of funerals.

Under the scheme quietly slipped out by the Government last week, bereaved relatives will now have to pay for extra checks into how the person died.

Cash raised will pay for a system of NHS ‘medical examiners’ who will double-check the cause of death before the body can be released for burial or cremation. 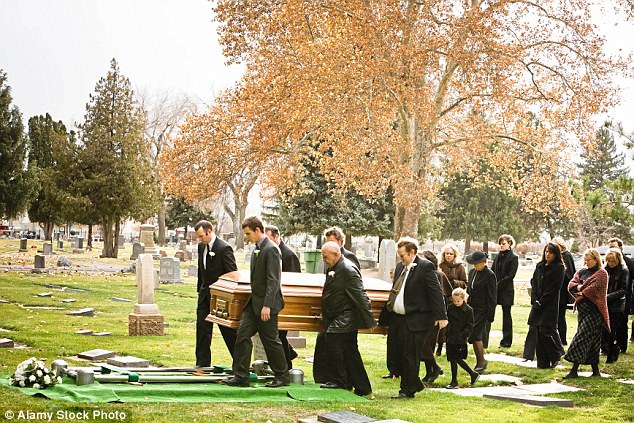 It is hoped the examiners will spot evidence of any suspicious circumstances and so avert another case like that of serial killer GP Harold Shipman – who killed hundreds of his patients but was able to get away with it by recording the deaths as due to natural causes.

Last night, critics said the charges will hit poor families hard at a most difficult time and argued that the new examinations, expected to take just 15 minutes, will not be thorough enough to detect foul play.

The news comes as two major inquiries start into the high cost of dying, with HM Treasury investigating costly pre-paid funeral plans and the Competition And Markets Authority looking at steeply rising fees. The average burial now costs a staggering £4,000, having doubled in just over a decade.

Frank Field MP, chairman of the work and pensions select committee which recently investigated support for the bereaved, said: ‘This will put the overinflated cost of a basic, decent funeral even further out of reach of poorer families. The new charge must not be added to the bill of people already facing a pauper’s funeral for their loved ones. Government must quickly establish a fair cost for a fair funeral that it will fund for families who cannot afford even that.’

The reforms are intended to introduce more ‘independent scrutiny on the accuracy and completeness’ of the Medical Certificate of Cause of Death.

They will deter ‘crime and malpractice’ while also detecting poor practice in hospitals and helping the bereaved learn more about how their loved ones died, it is hoped.

Latest figures show 490,791 deaths were registered in England in 2016, but only 90,404 were investigated by post mortem or a coroner’s inquest. When bodies are to be cremated, families must currently pay £184 for three different forms signed by two doctors and a crematorium official to certify the cause of death.

In the 20 per cent of deaths that lead to burial, a doctor signs a death certificate for the registrar but there are no additional checks. Within the next year, the NHS will have to appoint and train as many as 408 medical examiners along with 1,086 officials in every hospital trust to check an estimated 373,000 ‘non-coronial’ deaths.

They will look at the deceased’s medical records, discuss the case with relatives and the doctor who gave the initial cause of death – and possibly carry out an external examination of the body. The basic checks will take only 15 minutes per case, according to a Government Impact Assessment.

Fees – to be fully introduced in 2021 – have not been set but will be at least £95 according to calculations in the Impact Assessment.

However local authorities say this will not be enough to cover the cost of the system.