Enraged parents have attacked a high school’s decision to change its rules to allow anyone who wants to be on the cheerleading team to join, regardless of their talent and ability.

Hanover Park High School held its tryouts in East Hanover, New Jersey, last month, but after making cuts, a parent complained about their child not being allowed on the team.

This led the athletic director to changed the policy, to allow anyone who wants to be on the cheerleading team to join. A school statement said the change was meant to ‘facilitate a more inclusive program’.

But this new rule upset some cheerleaders – and their less-than-impressed parents who asked the school ‘why go for excellence when you can just let a little snowflake whine and cry to get the position?’ 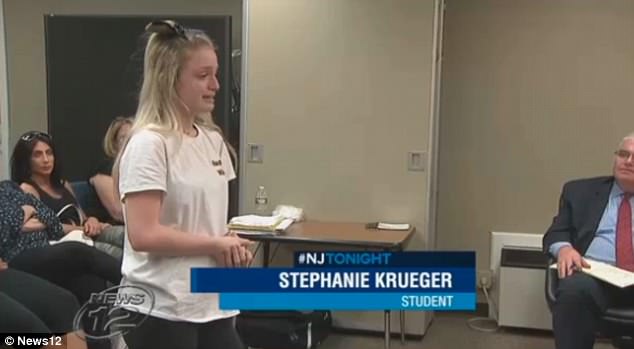 Tearful Stephanie Krueger told the board: ‘I tried my hardest, and now everything’s going away, all because of one child who did not make the team

After Hanover Park High’s administration said the change was due to an ‘irregularity in the selection process’, parents sent letters to the principal, complaining about the new policy.

It is understood that the principal threatened to disband cheerleading altogether, saying ‘it’s not a sport,’ according to a report on News 12 New Jersey.

Some girls were so upset about the change that they spoke out at the school’s board of education meeting, asking for Hanover Park to reverse its decision because they had ‘worked so hard to make the team’. 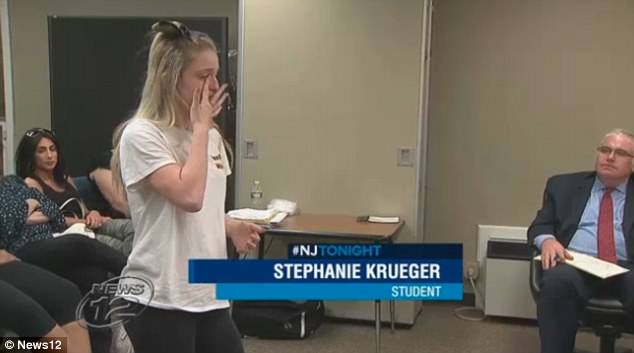 They, and their parents, pointed out that the girls were normally forced to earn their cheerleading through sheer hard work.

Tearful Stephanie Krueger told the board: ‘I tried my hardest, and now everything’s going away, all because of one child who did not make the team, and a parent complained, so now all my hard work has been thrown out the window.’

Sophomore Jada Alcontara said: ‘I came up here to state that I did not put in 18 months of work to lead up to this moment, just to be told it didn’t matter anymore.’

On the school’s Facebook page, people have hit out, with one woman saying: ‘I’m 52 and live in Georgia. I want to be on your cheer squad. And I can still do a cartwheel. Well, not without a lot of back pain and limping afterwards. But that’s OK, right?’ 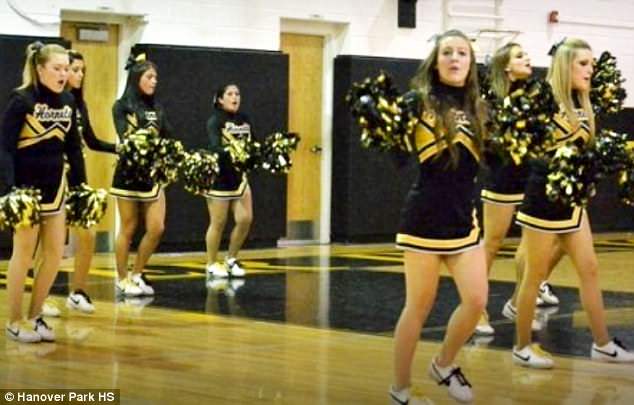 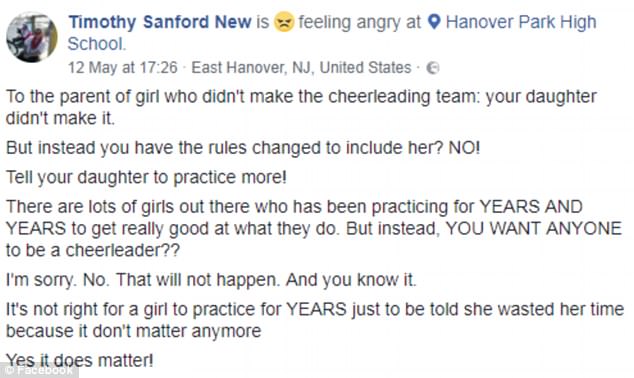 After Hanover Park High’s administration said the change was due to an ‘irregularity in the selection process’, parents sent letters to the principal, complaining about the new policy. Complaints are still being made about the changes via Facebook

‘There are lots of girls out there who [have] been practicing for years and years to get really good at what they do… it’s not right for a girl to practice for years just to be told she wasted her time because it doesn’t matter anymore.’

In a statement, the school board said: ‘In order to facilitate a more inclusive program, the alignment between the various cheerleading squads would be modified to allow all interested students to be able to participate.

‘This decision was made in the best interest of all students and was made to be as inclusive as possible.’

The board is reviewing the policy, but it is unclear when a final decision will be made. 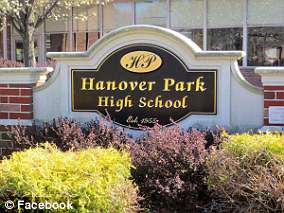 ‘The Hanover Park cheerleading program is not competitive’, said a statement from the high school

In light of recent events regarding the cheerleading squad try-outs at Hanover Park High School, the school administration would like to help clarify inaccurate information being circulated in the press.

It is important to understand that the cheerleading program at Hanover Park does not compete in interscholastic events. The guidelines that govern cheerleading are, and always have been to develop knowledge, positive attitudes, teamwork skills, leadership and athletic skills.

These core values have remained the same to the present. Historically, Hanover Park had three cheerleading squads; Black, White and Gold, representing the school’s colors. Interested participants are required to audition for the squads and a selection is made based on certain criteria.

Every individual who seeks to participate in cheerleading is placed on one of the three squads. Furthermore, every participant, regardless of squad, has always received a varsity letter.

The High School principal received multiple appeals concerning the process that was implemented in selecting students for the various squads.

As a result of our investigation, it was discovered that a modification was made for qualification to the black squad. This modification increased the number of students who had qualified for black squad based on a scoring decision.

Based on the core values contained in the guidelines for cheerleading, the Principal determined that for the 2018-19 school year, the three squads were condensed to two squads, an upperclassmen squad and an underclassmen squad. 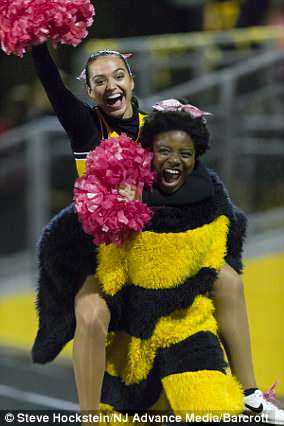 Group involvement, rather than an individual’s performance, is all important, says the school

Contrary to many of the reports, the two cheerleading squads for the 2018-19 school year are only available to those students who participated in the April 2018 audition process.

No additional students were placed on the cheerleading squads once the April 2018 audition process was closed. With the restructuring, the distribution of the cheerleaders was reallocated between the two squads.

The Hanover Park cheerleading program is not competitive and with this transition, they only will be supporting and encouraging more participation, which is Hanover Park’s goal.

At no time was there any consideration for the cheerleading program to be disbanded. Hanover Park’s ultimate goal has been, and always will be, to have more participation in school activities and boost school spirit.

To quote from the Guidelines for Cheerleading at Hanover Park, ‘The emphasis of cheerleading within the Regional High School District shall be upon group involvement rather than featuring the performance of a single or select individual or individuals.’

Hanover Park’s cheerleading squads have never been competitively driven, but are only used to enhance school spirit, pep rallys and school athletic activities.