Tory fury over Corbyn’s plan to speak at Belfast university where IRA murdered a lecturer, as he makes his first visit to Ulster as Labour leader following decades of campaigning for a united Ireland

Mr Corbyn is this week expected to exploit Tory divisions over Brexit by travelling to Belfast and visiting the border with the Republic.

But the Opposition leader, whose links with the IRA as a backbench MP were monitored by the intelligence services, sparked Tory fury over a planned event during his visit. 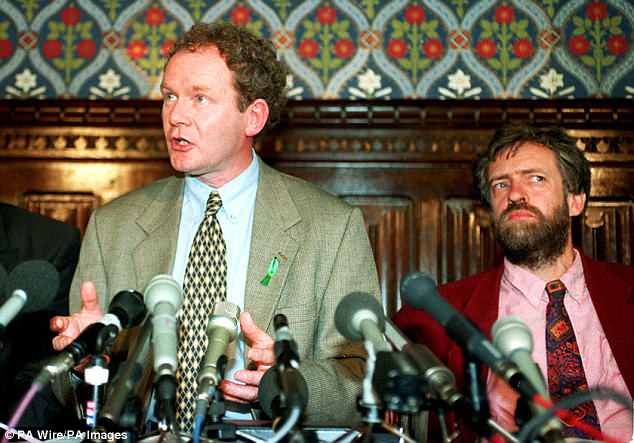 Jeremy Corbyn (right) listens as the late Martin McGuinness, a former IRA commander speaks at a news conference in the House of Commons in 1995

Labour insiders said that the party leader was expected to speak at Queen’s University, Belfast, where the IRA shot dead a lecturer at the height of the Troubles.

Mr Corbyn’s visit comes as Theresa May struggles to reach agreement with her Cabinet over a post-Brexit customs agreement that would avoid a hard border in Ireland.

Brexiteers, led by Environment Secretary Michael Gove and Foreign Secretary Boris Johnson, reluctantly agreed last week to an extension of the UK’s membership of the EU customs union beyond the end of the transition period in December 2020 to escape having to erect a physical border.

During his 30-year backbench career, Mr Corbyn campaigned for a united Ireland and shared platforms with convicted terrorists.

Jeremy Corbyn’s right-hand man was forced to abandon a planned speech to prison officers last week when they objected to his support for the IRA.

Shadow Chancellor John McDonnell was minutes away from making his keynote address to the Prison Officers’ Association’s annual conference on Wednesday when a Northern Irish delegate intervened, saying that he should not be given a platform because of his ‘links to the IRA’.

McDonnell has claimed Republican terrorists should be honoured for their ‘bombs and bullets and sacrifice’, and is said to have a plaque commemorating hunger-strike ‘martyrs’ in his office. 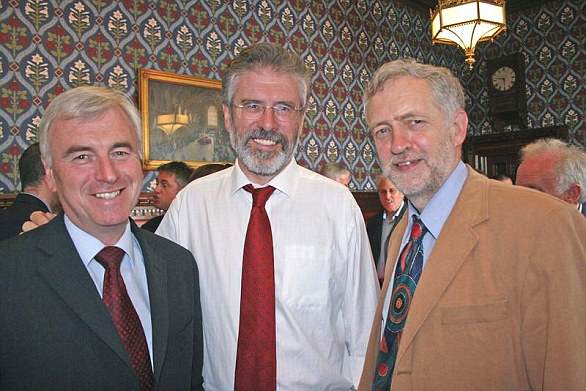 The attempt to stop the speech was rejected by association chairman Mark Fairhurst.

But when Mr McDonnell, who was waiting outside the venue in Southport, heard what happened, he cancelled his speech.

A source said: ‘The Northern Ireland delegation were upset as many of them lost good friends to IRA violence.

;They felt McDonnell was an apologist for the IRA and that it was an insult for him to be speaking. There was real anger he had been invited.’

McDonnell sent a message to delegates saying he didn’t want to ruin the event and offered to meet Northern Ireland prison officers to address ‘misconceptions’ about his links to the Republican movement.

Sources have indicated that Mr Corbyn’s activity led to MI5 keeping a file on him in the 1990s.

Edgar Graham, a 29-year-old Unionist law lecturer, was shot dead by the IRA as he was walking down Queen’s University Square in 1983. Sinn Fein’s Gerry Adams refused to condemn the killing at the time. 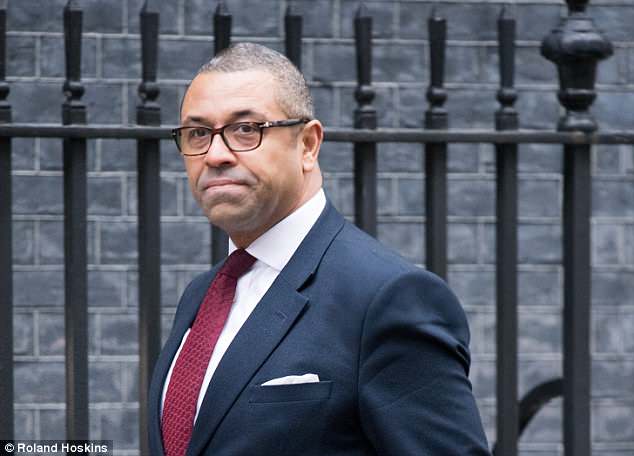 Mr Cleverly told The Mail on Sunday: ‘It’s deeply concerning that Jeremy Corbyn is considering showing up where Edgar Graham was killed by the IRA.

‘It shows a callousness and deep lack of respect. Corbyn gave cover to the IRA while they were bombing and shooting our citizens.’

DUP MP Mr Paisley said: ‘I hope he sees this as an opportunity to condemn all IRA violence.’

Mr Corbyn’s office last night refused to discuss details of the visit, but a spokesman said it was ‘nonsense’ to accuse him of a lack of respect in choice of venues.

He added: ‘Jeremy campaigned for peace in Northern Ireland. To do so, he campaigned for the rights of all to be respected and spoke to people on all sides of the conflict.’