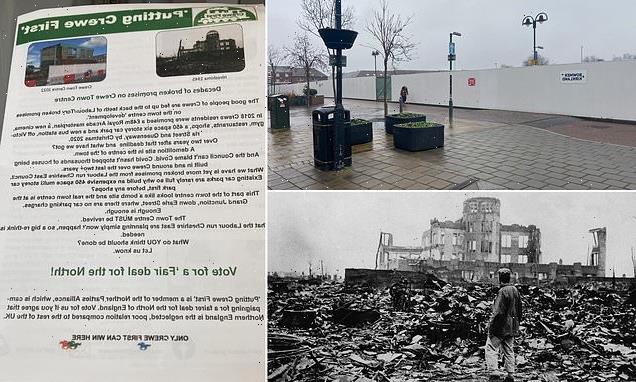 The centre of a town once known as ‘the world’s greatest railway workshop’ has been compared to Hiroshima after the 1945 nuclear bomb blast in a ‘disgusting’ political flyer.

Crewe developed from a village into of Britain’s leading engineering centres during the Victorian railway boom.

But the Cheshire town has been hit hard by the decline of its High Street, with numerous empty shops – and a large area was bulldozed last year for redevelopment. 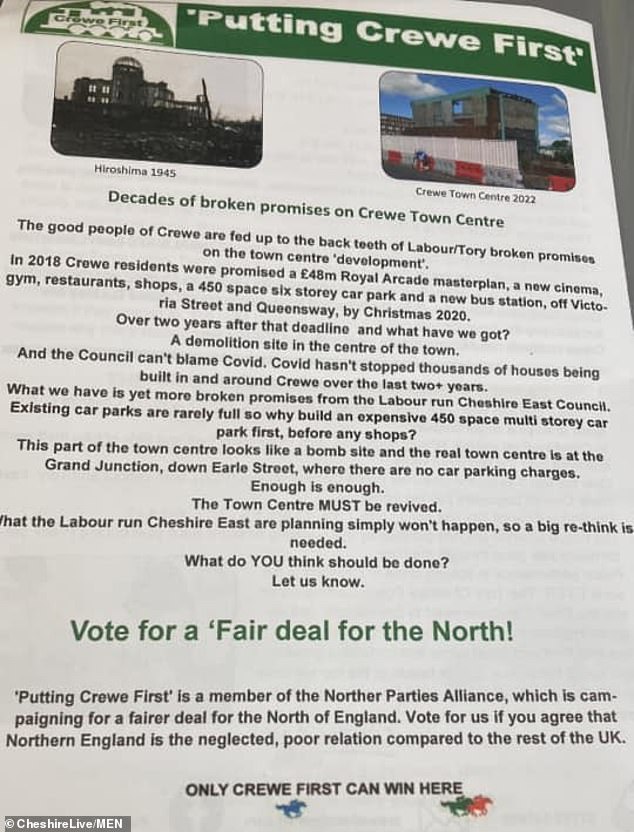 The leaflet, which described Crewe as a ‘bomb site’ and featured pictures of Hiroshima in 1945, was distributed by ‘Putting Crewe First’ 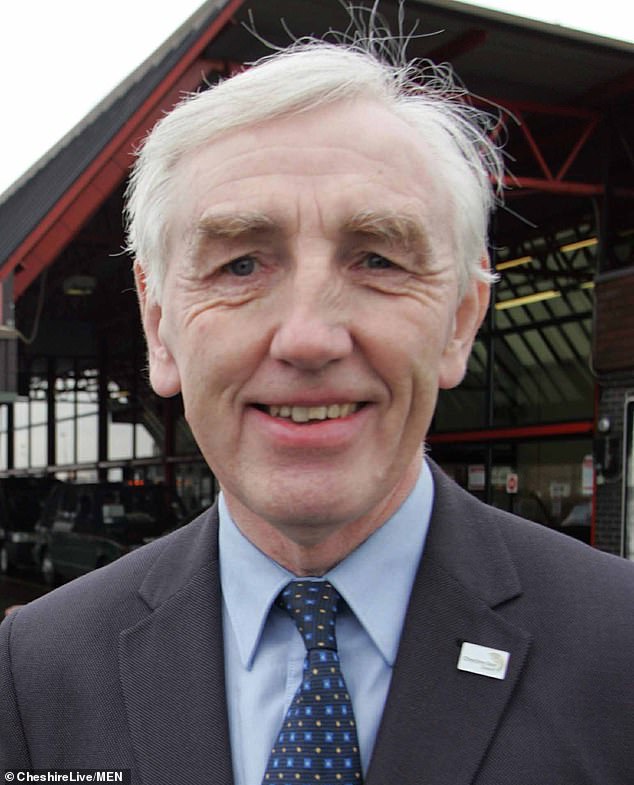 A flyer from the group shows a picture of the town’s Royal Arcade shopping centre – currently a building site as it is revamped as part of a £48m scheme – with the caption ‘Crewe town centre 2022’ next to an image of Hiroshima after the atomic attack.

The leaflet told how residents were promised a ‘new cinema, gym, restaurants, shops, a 450-space car park and bus station by Christmas 2020’, then adds: ‘Over two years after that deadline and what have we got?

‘This part of the town centre looks like a bomb site’.

But the publication sparked a backlash from local councillors, who said it was wrong to compare the site with the devastating aftermath of a nuclear bomb that killed tens of thousands.

Connor Naismith, Labour councillor for Crewe West on Cheshire East Council, said: ‘It is disgusting, desperate and insensitive to compare Crewe town centre to a tragic event during the fight against fascism in which tens of thousands of people lost their lives.’ 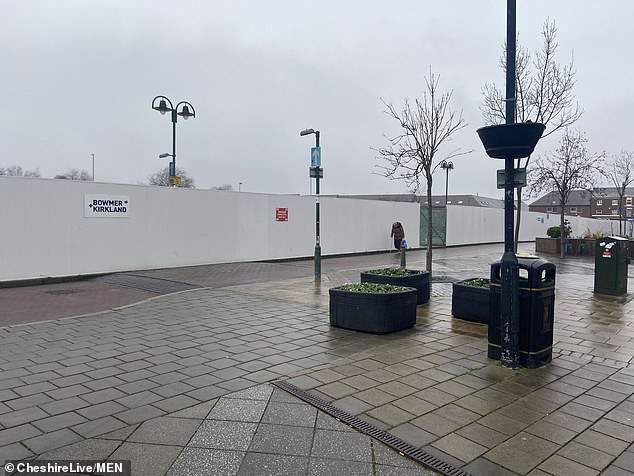 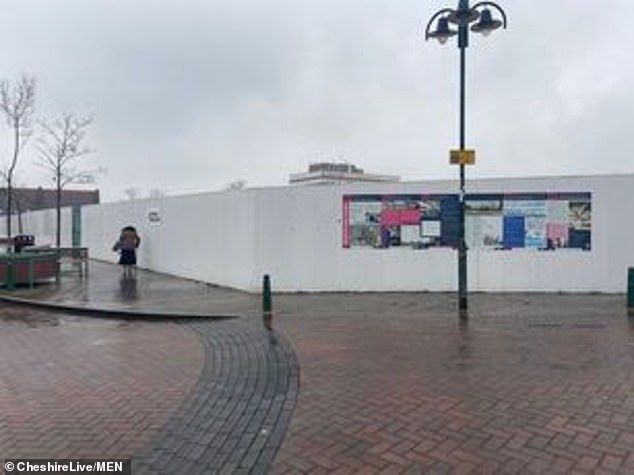 Mr Silvester said: ‘Many people in Crewe we speak to refer to Crewe town centre as a bomb site’ 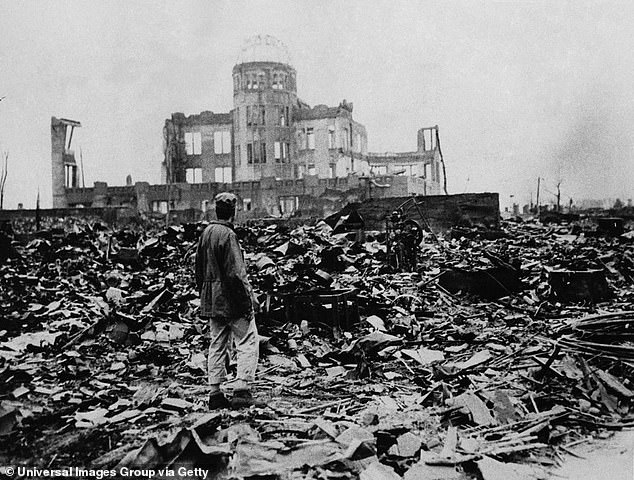 Hiroshima, Japan, pictured after the explosion of a nuclear bomb in August 1945 at the end of World War II 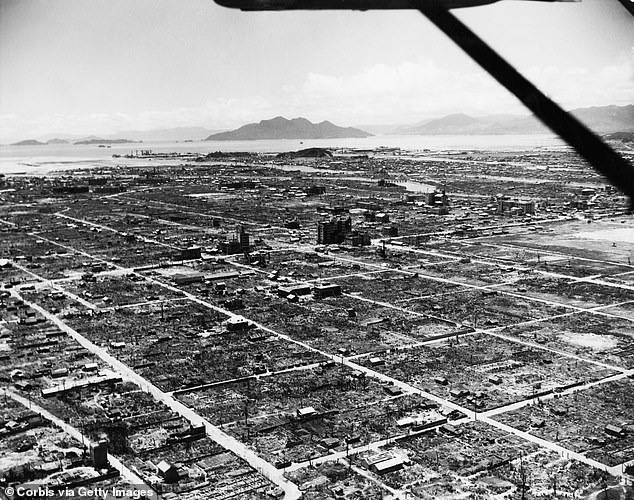 Mr Silvester, who has been involved in local politics since 1976 and is a former Crewe and Nantwich borough leader and mayor, said the flyer was a criticism of what he described as ‘broken promises’ on the regeneration of Crewe town centre.

The former UKIP and Conservative member, currently a parish councillor in Minshull Vernon, a village north of Crewe, said: ‘Many people in Crewe we speak to refer to Crewe town centre as a bomb site. In 2015 Cheshire East paid an excessive £6m for the Royal Arcade site.

‘They then proceeded to demolish all of it in early 2021, at a great financial, multi-million-pound loss to the council taxpayers of Crewe. It has looked like a bomb site ever since.

‘We are just comparing it with the most famous bomb site in world history. In no way are we trying to be insensitive to those that tragically died.

‘I have visited Hiroshima and the museum devoted to what happened in 1945. I was very moved by it and have every sympathy for all those who died and were injured and their families. War has casualties on all sides and should be avoided whenever possible.’

He said his group had printed 10,000 of the leaflets but ‘had not received one complaint’. He branded the criticism ‘politically motivated’.

‘In fact, originally in 2018, Cheshire East promised the £48m town centre redevelopment would be completed by Christmas 2020.

‘Here we are two years after it should have been completed and not a brick has been laid.

Mr Silvester, 70, has been a controversial figure in the town’s politics. In early 2021, Twitter suspended his account for ‘spreading misleading and potentially harmful information related to Covid-19’.

In 2012, he was fined £45,000 at Chester Crown Court after being fined over fire safety breaches at private rented property owned by him and his brother.

Nick Mannion, chair of Cheshire East Council’s economy and growth committee, did not comment on the leaflet but said work was progressing on the first stage of the scheme, a bus station, ‘on track’.