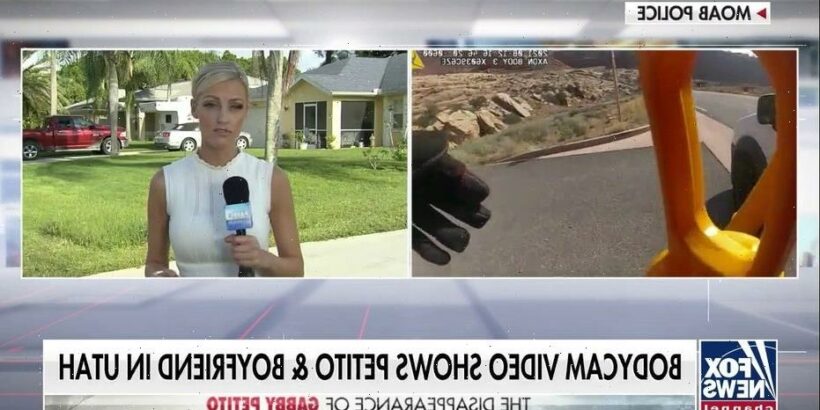 MOOSE, WYOMING – Forensic psychiatrist Dr. Ziv Ezra Cohen suggested there is more to the Moab City, Utah, Police Department’s bodycam footage of Gabby Petito and Brian Laundrie than meets the eye and that Laundrie’s family may be in a state of denial.

Moab police released bodycam footage from Aug. 12 last week showing officers interacting with Petito, 22, and Laundrie, 23 — an engaged couple traveling cross-country in a Ford van that they converted into a camper — after a witness called 911 around two weeks before she disappeared to report a “possible domestic violence” incident, as Fox News Digital first reported.

The caller was heard telling a dispatcher that “the gentleman was slapping the girl” and hitting her, Fox News confirmed Monday after exclusively obtaining audio of the call.

“We really don’t know how extensive the fight was,” Cohen, a clinical assistant professor of psychiatry at Weill Cornell Medical College of Cornell University and staff member of New York-Presbyterian Hospital, told Fox News. “… What we know is that when they were pulled over by the police, she was very upset, and they were both minimizing their argument. I think that’s clear. She appears to try to blame it on her OCD, and he talks about his muddy shoes. She also says she’s under a lot of stress.”

In the bodycam footage, Petito, who was reported missing on Sept. 11, appears distressed and apologetic while Laundrie appears calm after what they describe as a stressful morning. Laundrie tells police in the video that the scratches on his cheek came from Petito. Police separated the pair while questioning them.

Cohen added that “such an imbalance of the emotional state” between the pair as seen in officers’ bodycam footage “does raise a red flag” because Petito “doesn’t just look like someone who’s having a panic attack or who’s anxious.”

“She looks scared.” he said. “She looks very overwhelmed. … She was emoting so much that it was very clear that there had been an incident and there had been a problem of some kind that she was struggling with.”

In part of the video, Petito blames her “OCD” as the reason they started fighting before police responded to the 911 call.

“People with OCD are not violent. OCD is not a risk factor for violence. If there was an altercation between them, certainly OCD would not be fodder for something that would lead her to hurt him,” he explained. “It could cause an argument. If she does have OCD … he might get upset with her, or she might get upset with him, but people with OCD are not violent.”

While it’s possible the couple may have just had a stressful morning as they described in the video, Cohen believes that is contradicted by the 911 caller who reported physical violence.

The psychiatrist also suggested the couple may have been intoxicated in some capacity.

“They’re going on a van trip cross-country. They’re in the desert. Those are some settings in which young people tend to use substances that can make them have an altered mental state. They can feel overwhelmed. They can have a bad trip. And it could lead them to act irrationally. It could also lead them to get into an altercation,” he said.

Investigators on Sunday discovered a body at a campsite in Teton-Bridger National Forest in Moose, Wyoming, where travelers discovered Petito’s van in late August, Teton County coroner Brent Blue confirmed to Fox News Digital. The FBI later confirmed that the remains were consistent with a description of Petito.

Laundrie returned home to North Port, Florida, where the couple lived with Laundrie’s parents, 10 days before Petito’s family reported her missing on Sept. 1 with no sign of his fiancee. Laundrie’s parents said the last time they saw him was on Sept. 14 and have been communicating through their attorney. Cohen suggested the family may be in some sort of denial about the case involving their son.

“I think that parental instincts tend to be very strong. There’s also a parental tendency to not see the worst in one’s own children, and so when you find those two tendencies, there’s a tendency to deny that one’s child could have been involved in such a crime and to protect them at all costs,” the psychiatrist said.

FBI agents entered Laundrie’s parents’ home on Monday and temporarily removed them from the premises.