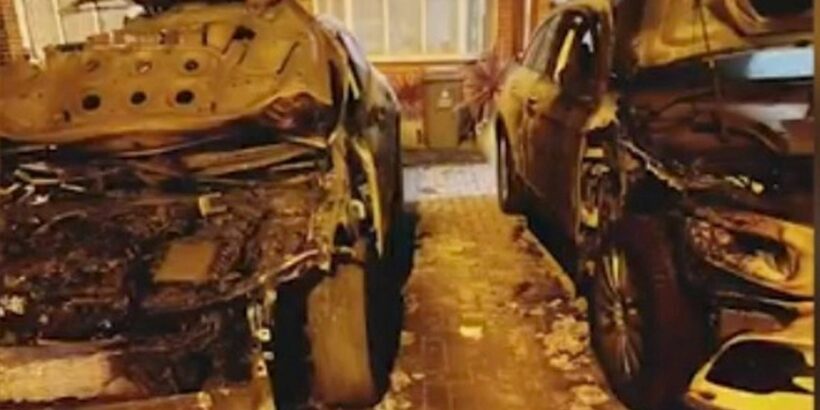 This is the shocking moment thugs were caught on camera as they petrol-bombed cars on a 'lawless' street in the West Midlands.

Six cars have been torched in four separate incidents – prompting police to install a camera in the trouble-hit area of Walsall.

In one clip, two people can be seen getting out of a car that had pulled up outside a property on the Broadway and within seconds a fireball engulfs a vehicle parked on the drive, Birmingham Live reports.

Further footage from the dramatic aftermath of one of the arson attacks, shows plumes of smoke billowing into the air firefighters attempt to tackle the furious orange flames.

The vehicles were left as completely burnt-out shells following the incidents.

Bearded Broz, a Facebook community group, posted the videos branding the town 'lawless Walsall' – and urging anyone with information about the culprits – who were believed to be travelling in a silver Toyota Yaris and a black Seat Leon – to contact police.

In response to the incidents, West Midlands Police has stepped up patrols in the area. So far, there have been no arrests.

A force spokesman said: "We're investigating after a number of cars were damaged in suspected arson attacks on the Broadway, Walsall. We've received four separate reports – relating to six vehicles – overnight between June 26 and July 4.

"We've stepped up patrols in the area and also ensured a camera has been installed in the area. CCTV and other enquiries are being carried out."

Anyone with information has been urged to contact police via Live Chat at www.west-midlands.police.uk or by calling 101. Alternatively, to remain anonymous, contact Crimestoppers on 0800 555 111.