Passengers at Gatwick reported the ground shifting beneath them during the UK’s seventh earthquake in just three months.

Witnesses who felt the tremours are being urged to get in touch with the BGS while the Seismology Team establishes how far the quake reached.

Campaigners have raised concerns the earthquake was triggered by fracking in the nearby area, however the BGS said it is as yet unable to determine the cause.

Energy investment firm UK Gas and Oil (Ukog) purportedly started flow-testing at a fracking site in Horse Hill, Horley, which is around three miles from where the earthquake was registered. 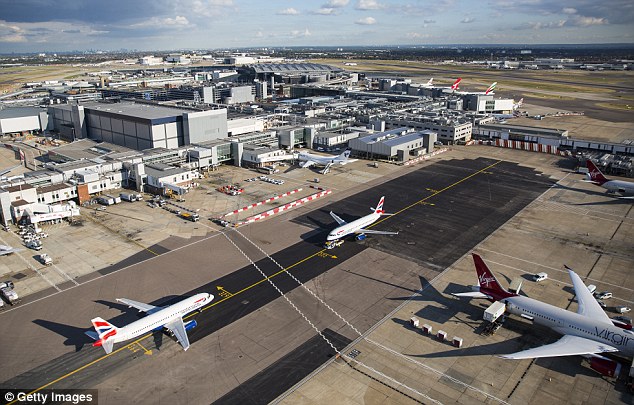 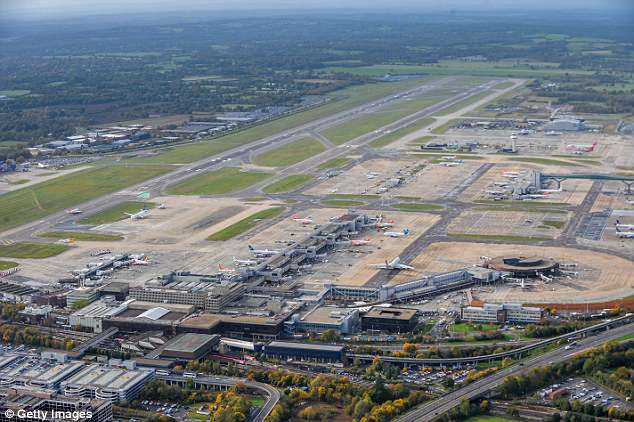 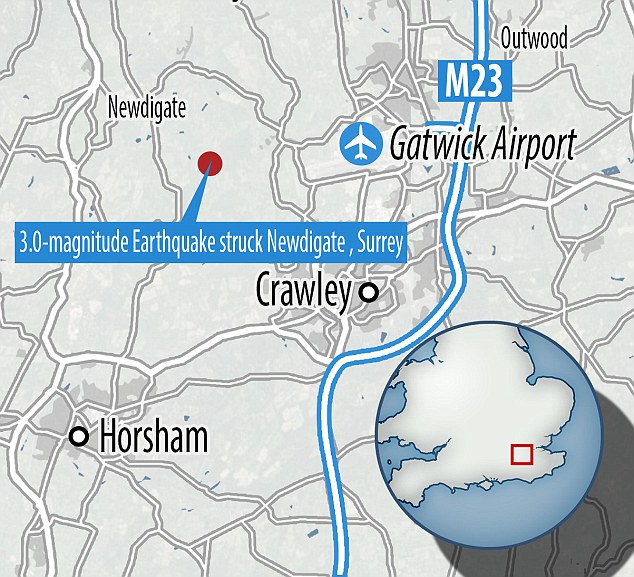 The British Geological Survey (BGS) said the quake struck Gatwick airport as well as areas of Surrey and Sussex today at 10.53am

Samantha Ferguson wrote: ‘My whole flat just shook underneath me!’

James Billington added: ‘I’m in Dorking and the office just shook. Not another Surrey earthquake, surely?? The end is nigh’.

Following the initial shock of the quake, twitter users were quick to make light of the minor tremours

HOW DOES FRACKING TRIGGER EARTHQUAKES?

Earthquakes are usually caused when rock underground suddenly breaks along a fault.

This sudden release of energy causes the seismic waves that make the ground shake, and in extreme cases can even split the Earth’s crust up to its surface.

Fracking works by injecting huge volumes of water into the rocks surrounding a natural gas deposit or hydrothermal well.

The water fractures the rocks, creating dozens of cracks through which gas and heat can escape to the surface.

Fracking causes Earthquakes by introducing water to faultlines, lubricating the rocks and making them more likely to slip.

When two blocks of rock or two plates rub together, they catch on one another.

The rocks are still pushing against each other, but not moving, building pressure that is only released when the rocks break.

During the earthquake and afterward, the plates or blocks of rock start moving, and they continue to move until they get stuck again.

There are questions over whether a magnitude 5.6 temblor that hit Oklahoma – the biggest earthquake ever recorded in the state – was caused by the controversial process.

And Phil Elwell described the event as ‘a proper house trembler! Weird’.

Scientists at the BGS said: ‘A number of reports have been received from members of the public in Newdigate, Dorking, Horley and Charlwood, Surrey and from Crawley and Horsham, West Sussex.

‘This event locates in the same region as previous ones that have occurred since April’.

The British Geological Survey has not been able to conclusively determine the cause, however, it believes flow-testing at a future fracking site is ‘unlikely’ to have been the trigger.

In a statement, it ruled: ‘While it is well-known that hydrocarbon exploration and production can result in man-made or “induced” earthquakes, such events usually result from either long-term hydrocarbon extraction, or the injection of fluids (e.g. hydraulic fracturing) during production.

‘It seems unlikely that flow testing, even if it had taken place, would result in induced seismicity. Although there have been no other instrumentally recorded events in the region in the last 50 years, there is evidence for historical earthquakes in the last 500 years, therefore a natural origin for these earthquakes can’t be ruled out at this stage.’

This sudden burst of energy causes the seismic waves that make the ground shake, which in some extreme cases can even split the Earth’s crust up to its surface.

Fracking works by injecting large volumes of water into the rocks surrounding a natural gas deposit or hydrothermal well.

As the pressure of water builds, it fractures the rocks, creating dozens of cracks through which gas and heat can escape to the surface.

The process can trigger Earthquakes by introducing water to faultlines, which lubricates the rocks and makes them more likely to slip – releasing the same energy as a naturally-occurring quake.

HOW MANY EARTHQUAKES HAVE SHAKEN THE UK IN RECENT YEARS?

The UK is expected to have an earthquake measuring 5.0 and higher on the Richter scale about once every eight years.

Tremors between 1.0 and 1.9 are expected across the country every two-and-a-half days.

The biggest earthquake in recent years was on February 27, 2008, with Market Rasen, Lincolnshire at its epicentre. It measured 5.2 on the Richter scale and was felt across much of Britain, including in Newcastle, Yorkshire, London, the Midlands, Norfolk and Wales.

In the past five years there have been 14 earthquakes in the UK.

On February 20, 2014, the Bristol Channel experienced the UK’s biggest quake in six years, measuring 4.1 on the Richter scale.

The East Midlands were rocked once again on January 28 2015, when tremors returned to Rutland, with that year’s other quakes falling in Sandwich, Kent, four months later, when Gwynned, South Wales was also hit in separate tremors.

There were two earthquakes in one day in Moidart in the Highlands of Scotland on August 4 this year. The tremor at 3.43pm measured 3.8 and one at 3.45pm was 3.4.

Seismologists at the British Geographical Survey confirmed today’s quake reached a magnitude of 3.0 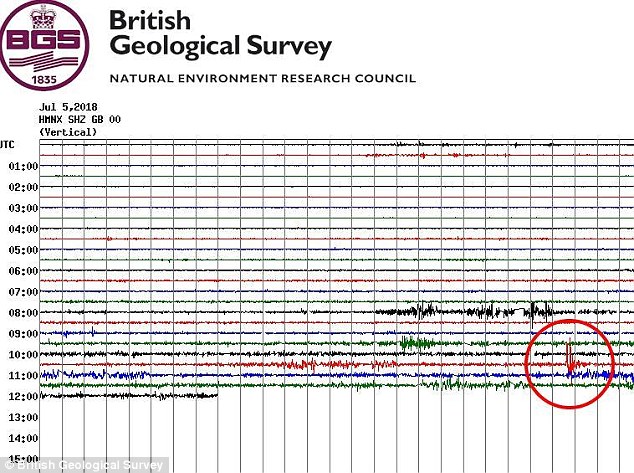 Scientists are the United States Geographical Survey placed the epicentre at Cranleigh, Surrey, west of Crawley.

Author Trevor Montague from Bewbush, near Crawley, said his house shook as the earthquake hit.

He said: ‘It was a definite very loud tremor and the house shook.

‘You know the feeling when a fast train goes by and everything shudders, it was like that, just very amplified.Nothing came off my desk, so fairly low scale, I’ve been here 40 years and I’ve never had anything like this before.’

Angela Bradbury from West Green, also near Crawley, said it ‘felt like an explosion or thunder’.

She said: ‘The ground moved and the conservatory I was in shock. We have builders in the next set of terrace houses and I thought they had dropped something heavy.’

Andrea Hoult, aged 70, of Faygate near Horsham, felt the quake but was left unperturbed.

She said: ‘It was around 11.50am and I was in our apartment when I heard the rumbling.

‘I have experienced earthquakes before when I was in Jordan and Kenya so I knew exactly what it was.I was sat doing some hand sewing when I heard the rumbling. We are close to a train line, airport and road hear but I knew it was not caused by them.

‘It only lasted a few seconds but it does cause great excitement.’ 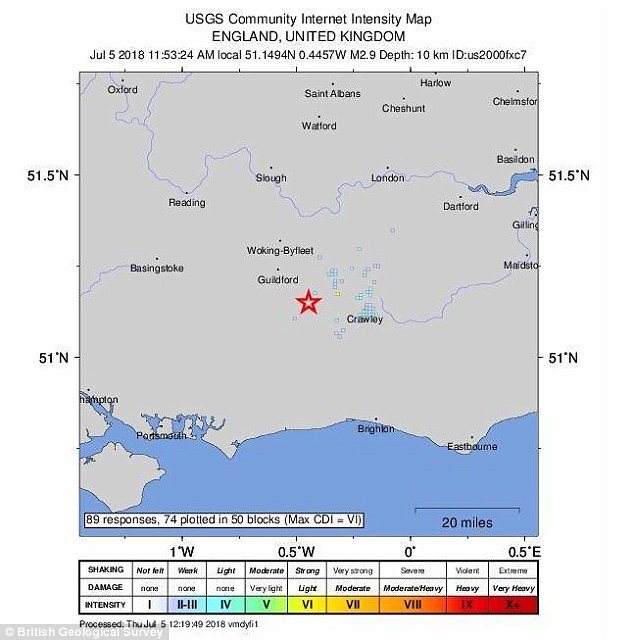 Scientists at the BGS said: ‘A number of reports have been received from members of the public in Newdigate, Dorking, Horley and Charlwood, Surrey and from Crawley and Horsham, West Sussex

Following the initial shock of the quake, twitter users were quick to make light of the minor tremours.

@kennyhedney wrote: ‘OMG! It’s finally happening. The SE of England has had enough. It’s breaking away!’

Thomas Gardiner added: ‘Was that an earthquake in Reigate or did Maradona just land at Gatwick?’

Earthquakes with magnitudes of 2.7, 2.6 and 2.4 were detected by the British Geological Survey, near Newdigate in Surrey in April and June, while three smaller ones also detected in the area.