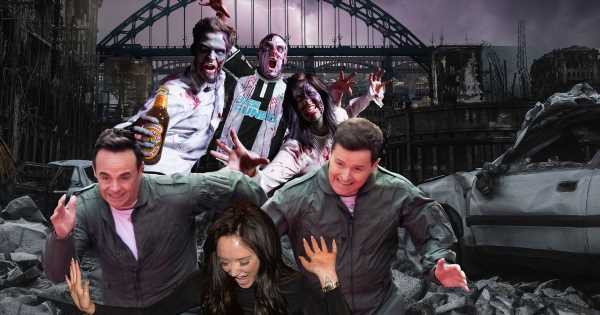 Geordies are building underground bunkers and safe houses – because they believe the end of the world is nigh.

Shock figures uncovered by the Daily Star Sunday show that one in five of them is expecting to face a world-ending event.

Thousands of us say we are ready for events such as nuclear war, economic and social ­collapse, natural disaster or even a zombie invasion.

And Newcastle can today be revealed as Britain’s Armageddon-fearing capital, with more ­people there stocking up on food and weapons than anywhere else.

It comes as the Doomsday clock – calculated by scientists to symbolically count the time until the end of the world – revealed we’re the closest we’ve ever been to disaster.

The north-east is best prepared for such an event, with a 32% spike in people building basement shelters.

Samuel Hunt, from construction firm Materials Market, said: “It’s interesting to see that those ­prepping for doomsday are based mainly in the north.

"It seems more Brits than ever are taking their survival into their own hands.”

With war looming ­between Russia and Ukraine, the climate crisis and the pandemic, ­experts put the Doomsday clock’s minute hand at 100 seconds to midnight.

It’s the most dangerous position since the clock was invented in 1947.

And many of us are stockpiling supplies of tinned food and bottled water, fuel, torches and batteries, and knives to protect ourselves in case society fails.

Geordie Shore star Nathan Henry is among those storing supplies.

The 30-year-old reality TV hunk said: “I have watched every zombie film there is and I think that in itself prepared me for what may come.”

He added: “I live by the mantra, ‘Failing to prepare is preparing to fail’. I think a lot of Geordies live by this. We are a resourceful kind of people.

“I am sure my mam will be prepared for Armageddon. If the supermarket closed tomorrow I’ve got enough food to get me through a month.”