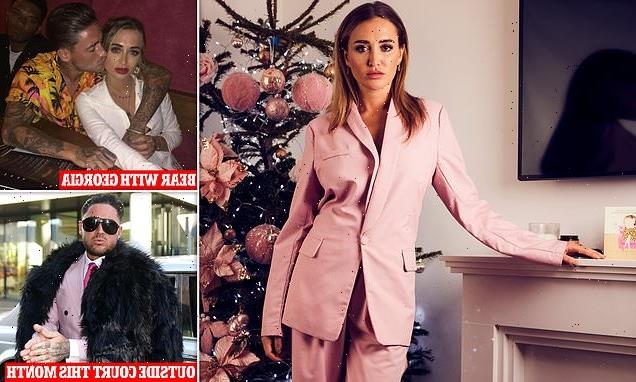 TOWIE and Love Island star Georgia Harrison reveals why she decided to publicly shame toxic ex Stephen Bear who wrecked her life by posting a video of them having sex all over the internet: ‘My worst fears had come true’

Just over two years ago, reality star Georgia Harrison received a text message from someone she had never met on the other side of the world.

‘They sent me a screenshot they had taken from the internet,’ she says. ‘I cried my eyes out the moment I saw it . . . my worst fears had come true.’

The shot was taken from footage that Georgia, 28, who has appeared in TOWIE and Love Island, fervently hoped had been permanently deleted. It showed her making love outside with her on-off boyfriend and fellow reality TV star Stephen Bear, best known as the winner of 2016’s Celebrity Big Brother.

At the time, Bear admitted to Georgia that he had recorded what she, quite naturally, assumed was a private moment, but promised to delete the film. 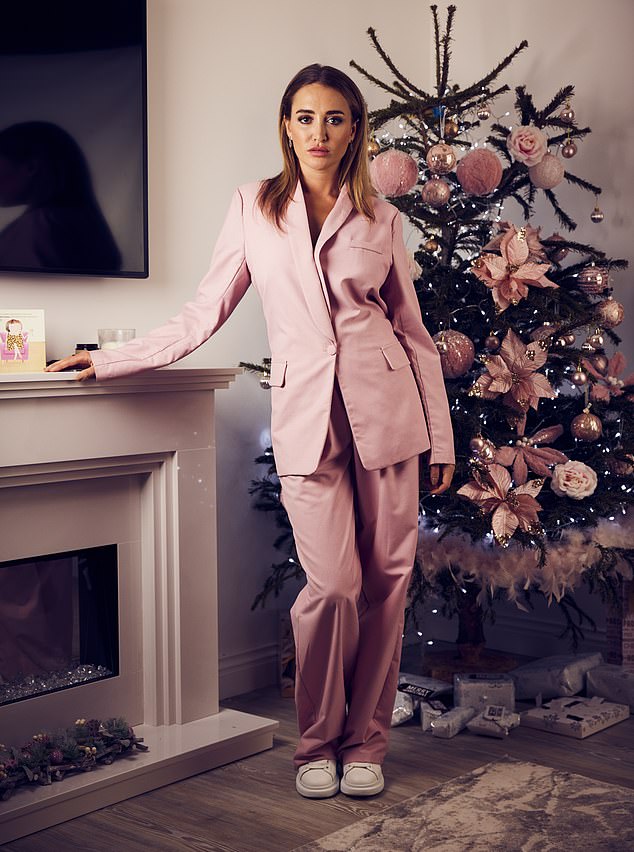 Except he didn’t. Instead, against her wishes, he uploaded the footage to his personal page on OnlyFans (the subscription website used by many to share explicit content), from where the film was copied and distributed across multiple pornographic websites.

For weeks Georgia, from Essex, was blissfully oblivious of this horrific betrayal — until that bombshell text revealed that the footage was not only out there but had gone global.

What followed can only be described as two years of hell: professionally shunned, her earnings plunged while her self-esteem plummeted to the extent that she had a breakdown.

‘It changed my life unequivocally on every level,’ she says now. ‘You feel worthless, ashamed, embarrassed, all the emotions you can think of. You think about your family, ex boyfriends, colleagues seeing it or even knowing about it, and it is mortifying. It coloured everything I did.’

Last week marked a turning point, however. Bear, 32, was found guilty at Chelmsford Crown Court of two counts of disclosing private sexual photographs and films with intent to cause distress, and one of voyeurism.

For Georgia — who waived her anonymity when she gave evidence — it has helped draw a line under her ordeal, although she still struggles to understand how the man she once trusted could so cruelly exploit her and why he hasn’t shown a single jot of remorse. 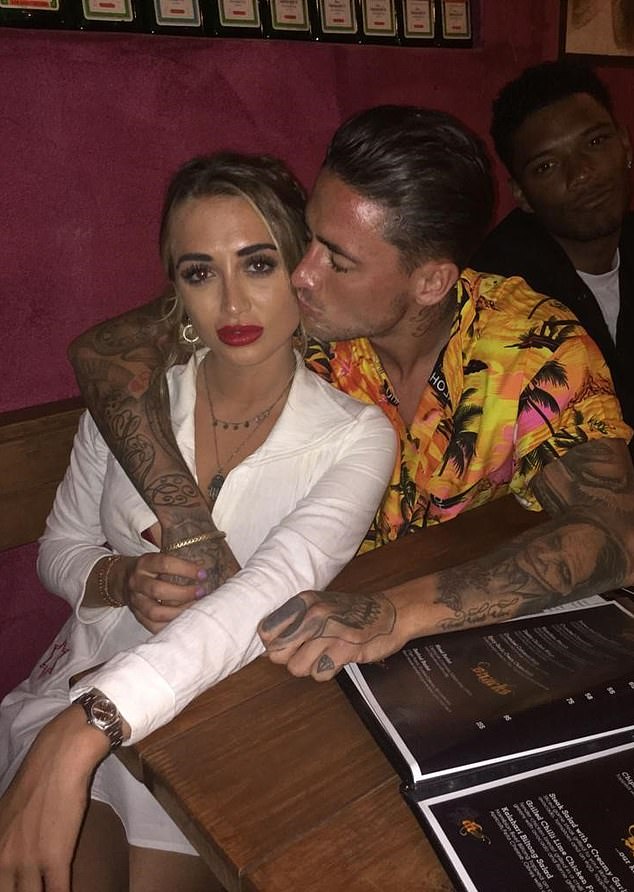 The video showed her making love outside with her on-off boyfriend and fellow reality TV star Stephen Bear, 32, best known as the winner of 2016’s Celebrity Big Brother

‘We ended our relationship on good terms, we stayed friendly. Yet he still decided to treat me as if I was worthless,’ she shakes her head. ‘It does affect your trust in human nature.’

Georgia — a bright, engaging and articulate young woman — is now speaking out to warn of the devastating fallout of sharing illicit images without permission.

‘The only people that should be judged are those who are sharing private sexual content without permission. It is the most enormous betrayal, and it has such a lasting impact.’

Her sentiments are echoed by her mum Nicky, 56, who sits in on our interview as an understandably protective presence for her daughter. ‘Georgia completely lost her personality,’ she says.

‘She really went into her shell. She used to say to me: ‘Mum, I’m not a bad person. I haven’t done anything to deserve this’ — and she hadn’t. It’s horrible watching your daughter go through something like this.’

While her parents separated when she was two, Georgia remains close to both her mother, who works as a PA, and father, and has three younger half-siblings, in their teens, on her father’s side.

‘When it all came out one of my first thoughts was about my dad,’ she says. ‘I couldn’t face speaking to him: I felt embarrassed and so stupid and guilty that I’d allowed someone as horrible as Bear to put me in this position. Luckily, my dad was so supportive, and he’s been amazing throughout.’

Certainly the irony is not lost on Georgia at how the fame she pursued as a teenager has taken such a destructive turn.

After leaving school at 16 to work as a PA, aged 19 she was invited to join the cast of TOWIE, the start of a reality TV career which saw her asked to join the 2017 series of Love Island. 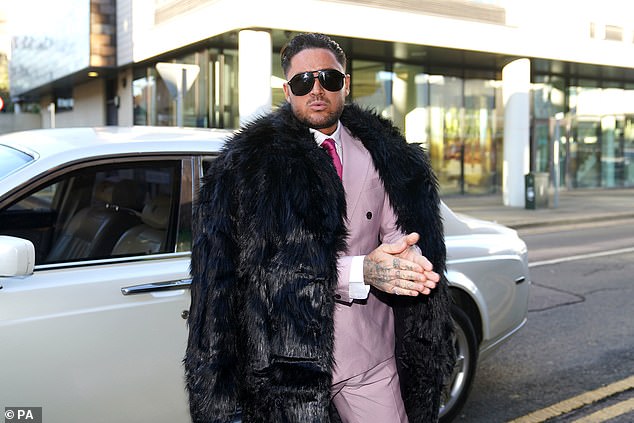 Bear’s court case was initially scheduled for last December. ‘Then at the last minute he decided to change his defence to say that somebody else uploaded it,’ Georgia says. ‘It meant more delays’

The 22-year-old emerged having gained nearly a million Instagram followers, enough to propel her into a world of personal appearances and brand promotion and she was able to fund a deposit on a flat.

Then, in early 2019, Georgia was asked to take part in MTV reality TV show The Challenge, in which contestants compete against one another in various extreme challenges.

Also among the cast was Stephen Bear, whom she knew vaguely from the Essex social scene and who, by coincidence, had moved into a house opposite hers a few weeks earlier.

Sequestered in the Namibian desert, Georgia says she fell for Stephen’s ‘cheeky chappy’ persona. ‘I knew he wasn’t serious boyfriend material, but we had fun.’

Their ‘relationship’ amounted to a few ‘dalliances’, of which one happened in August 2020, when Bear invited her over for drinks. 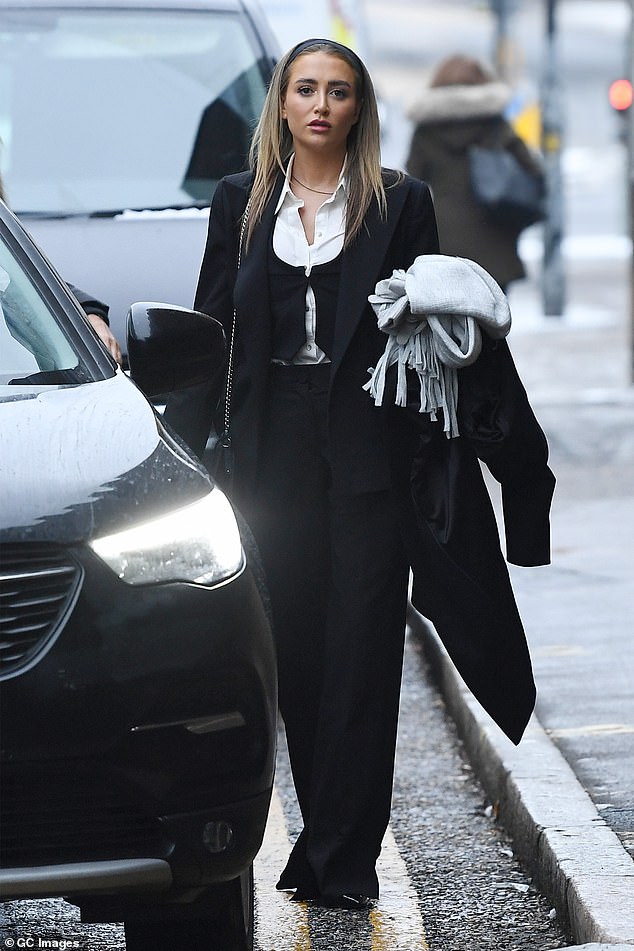 When the jury returned guilty verdicts, Georgia says it took a while for the relief to sink in. Bear will be sentenced in January

Even now, Georgia is uncomfortable recalling what happened next. ‘It was a hot day, we had a couple of drinks in the garden, I was with someone I felt comfortable with. It was just a natural thing in what I thought was a private place.’

What she didn’t know was that Bear was recording everything on his CCTV system. ‘I had no idea there were cameras in the garden,’ she says. ‘It wouldn’t have occurred to me.’

In fact, Bear confided in her later that afternoon that their activity had been filmed, claiming it had been accidental.

‘He made out that it was a massive mistake, that he hadn’t realised it might be recording,’ she recalls. ‘I made him show me the footage and I was horrified.

‘I told him no one could see it, that if he sent it to anyone he was committing an offence and that he needed to delete it. He was telling me not to be silly, that he would never do something like that to me.’

Yet weeks later, she went into ‘sheer panic’ when she heard how Bear had shown the video to a friend of hers.

In desperation, she turned to Bear’s older brother to ask him to intervene: ‘Bear really looked up to him — he’s ten years older and has a daughter of his own.’

Bear’s brother subsequently contacted Georgia to tell her that Bear had now deleted the video. Then, around a month later, on December 8, Georgia — who was in Dubai doing promotional work — received that shattering screenshot from someone in America.

‘My heart just sank to the bottom of my stomach, because now it was clearly global,’ she says.

Devastated, Georgia went on to Instagram and asked if anyone had seen a video of her and Bear in his garden, and if so could they send her the evidence.

It was then that Georgia called the police. ‘I knew I had no choice, this was a crime,’ she says. ‘They took it really seriously from the start which was very reassuring.’

Bear — who was also in Dubai — was arrested a month later, on January 15 2021, at Heathrow airport as he returned home. 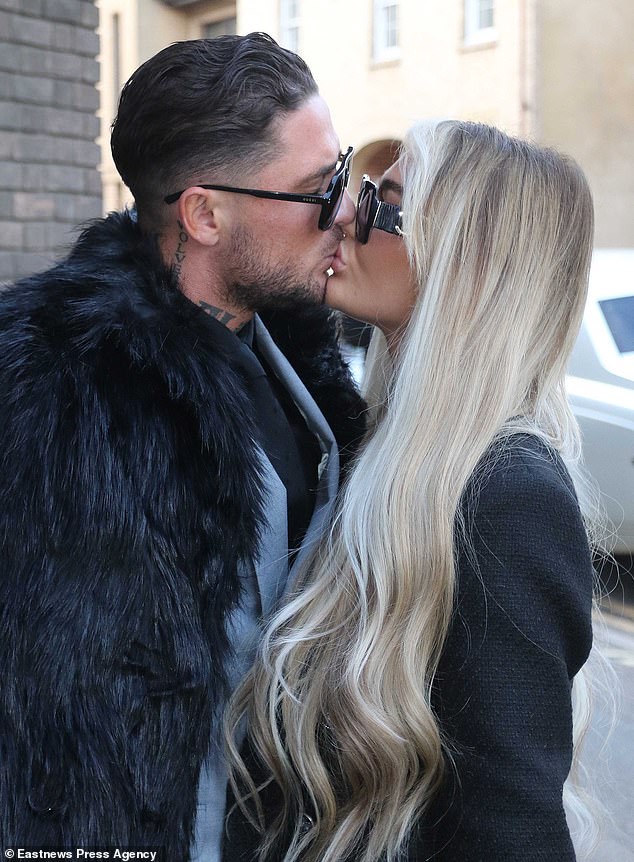 Georgia refused to lock eyes with Bear, who arrived in court each day accompanied by his 21-year-old girlfriend

‘While he was still in Dubai he had messaged me to say he understood that I was upset and that he wasn’t a bad person,’ she recalls.

‘He tried to get me to come and meet him but as far as I was concerned there was absolutely nothing to be said that would make up for what he had done. He had circulated the video for monetary gain.’

Meanwhile, the impact on Georgia’s professional life was instant, and work dried up almost overnight. ‘Suddenly I was a big red flag. I had a sex tape, and a lot of companies don’t want to be involved with that, which is fair enough. I think if I was in their position, I would do the same, but it was incredibly upsetting to lose opportunities for something that was completely out of my control. My earnings dropped drastically.’

Unable to face her tormentor living across the street, Georgia had to move out of her flat and back in with her mum, where she remains to this day.

‘I couldn’t face going back there and seeing his face,’ she says.

It’s perhaps little surprise that, given the impact on her professional and personal life, Georgia plunged into depression.

‘The thought of all these people looking at the footage — it’s horrible,’ she says. ‘I just felt really worthless. I didn’t want to go out, I didn’t want to meet new people. I also felt incredibly guilty about the impact on my brothers and sisters.

‘It’s been really hard for them. They were in boarding school at the time, and they had people calling them names, sending them horrible stuff on social media.’

Bear’s court case was initially scheduled for last December. ‘Then at the last minute he decided to change his defence to say that somebody else uploaded it,’ Georgia says. ‘It meant more delays.’

After another year of limbo, finally the case came to trial earlier this month.

Giving evidence, Georgia waived her right to anonymity, determined to claim some ownership of her story and highlight the human cost of such a devastingly personal crime.

‘I felt as though my anonymity was already non-existent,’ she says. ‘This way I felt like I could stand up for everyone who doesn’t have a voice because they’re too scared.’

She refused to lock eyes with Bear, who arrived in court each day accompanied by his 21-year-old girlfriend. Cutting a swaggering, unrepentant figure, with a rented Rolls-Royce and flaunting a black fur coat, he swore repeatedly while giving evidence. 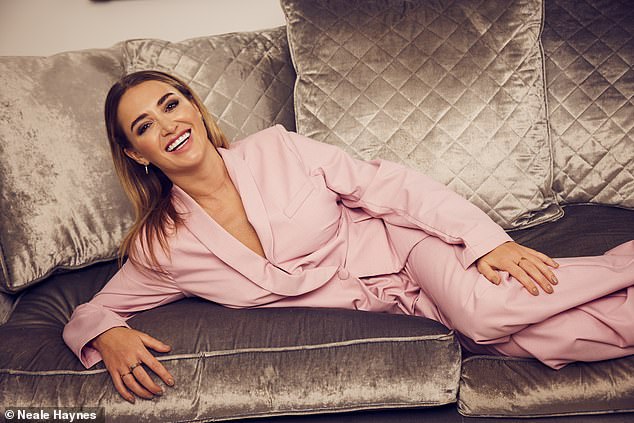 ‘He’s unrecognisable from the man I once knew,’ says Georgia.

When the jury returned guilty verdicts, Georgia says it took a while for the relief to sink in. Bear will be sentenced in January.

Yet still she’s reconciled to the fact she will never fully shake off what has happened. ‘I get horrifically trolled even now,’ she says. ‘It’s something I’ve got to learn to live with.’

But her promotional work has picked up and there are possible new TV opportunities. She would love a campaigning role to make sure what happened to her doesn’t happen to anyone else and hopes to go into schools to highlight how sharing sexually explicit imagery can ruin lives.

While Georgia was drawn in unwittingly, she wants to warn especially teenage girls that even being a willing participant is potentially disastrous.

‘I know all women have the right to do what they want, but I want to tell them that they’re still growing up, it’s easy for other people to make mistakes, and you don’t want someone to have power over you,’ she says.

‘I’ve been there, and I wouldn’t wish it on anyone.’