Berlin: Rap lyrics are sometimes controversial: References to sex and violence, along with the fluid use of profanity, offend some. But German rappers Kollegah and Farid Bang took offensive to a level leading to criminal investigation.

Ahead of Germany's biggest music awards ceremony in April, the pair were nominated for two awards. But controversy emerged over lyrics from the duo's newest record, "Jung, Brutal, Gutaussehend 3," (Young, brutal, good-looking 3). The album included references to the Holocaust, saying their bodies are "more defined than those of Auschwitz inmates," and that they will "make another Holocaust." 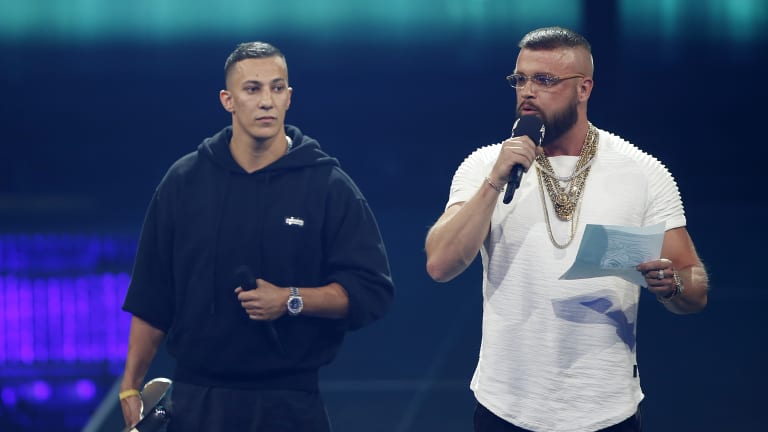 German rappers Kollegah and Farid Bang, whose song refers to “my body’s more defined than an Auschwitz inmate’s” receive the “Hip-Hop/Urban national” award during the 2018 Echo Music Awards ceremony in Berlin.

A number of people filed complaints to the police over the lyrics, saying they violated German laws concerning hate speech and anti-Semitism. But on Saturday, the Düsseldorf prosecutor's office issued a statement saying the lyrics were "neither an endorsement nor a trivialization of the Nazi regime and its genocide".

The prosecutor acknowledged the lyrics are misogynistic and violent, but said that does not offer him grounds to prosecute the rappers.

"The comparison of a concentration camp inmate with their own body may be tasteless, but it does not represent denial of the Holocaust," the statement said.

Since the controversy arose, the two musicians have tried to distance themselves from accusations they are anti-Semitic. The duo took a private tour of Auschwitz, where around 1.1 million people, mainly Jews, died at the hands of the Nazis, and those who survived often emerged gaunt-faced and emaciated.

Farid Bang wrote a letter apologising to a Holocaust survivor, and Kollegah, who said the lyrics were "misinterpreted," said he would provide Jewish listeners with free tickets to their shows. Their record label said it would donate more than $100,000 to a campaign that fights anti-Semitism. 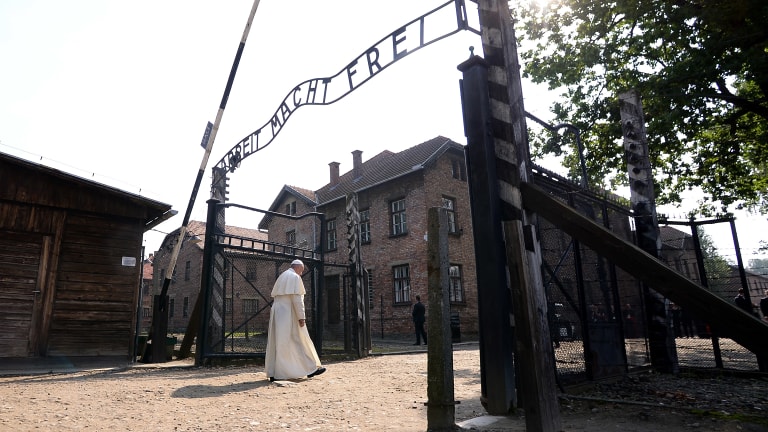 Pope Francis walks through the gate of the former Nazi German death camp of Auschwitz in Oswiecim, Poland, in 2016.

But the damage extends beyond the rappers and their record label. Because they took home the ECHO award for "hip-hop/urban" music, other awardees returned their prizes. And Foreign Minister Heiko Maas tweeted that "Anti-Semitic provocations do not deserve awards, they are simply disgusting."

Ultimately, the national outrage prompted record companies to completely scrap the awards ceremony, which is Germany's equivalent of the Grammys, saying that "the Echo brand is so badly damaged that a complete new beginning is necessary."

Whatever prize replaces it will have a new name. "Echo will be no more," Germany's BVMI music industry association said in April. The night the award was handed out to the rap duo coincided with Holocaust Remembrance Day.

German Culture Minister Monika Gruetters said that in the lyrics "a line was crossed."

"It is not a question of taste, but about the responsibility of the art and the artist for our community," Gruetters said.