Berlin: German firemen on Wednesday removed a golden statue of Turkish President Tayyip Erdogan on security grounds after it provoked an angry response from local people.

Organisers of an arts festival whose theme this year is "Bad News" had installed the four-metre statue of Erdogan, with one arm outstretched, on a plinth in the central Square of German Unity in the western town of Wiesbaden on Monday. 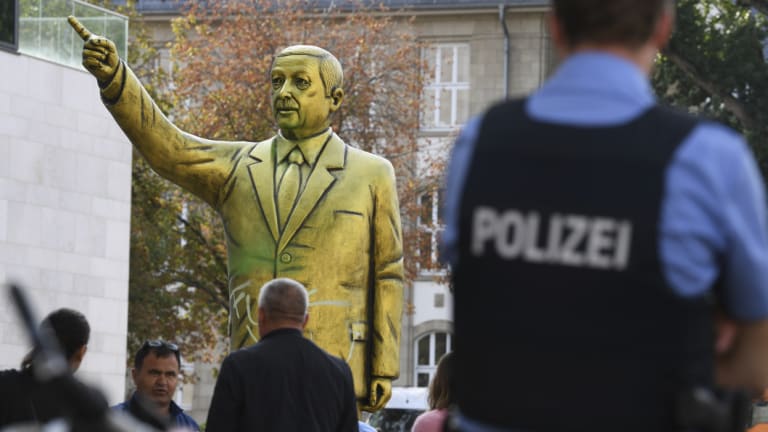 Police and passersby surround a statue showing Turkish President Erdogan which is part of the art festival ‘Wiesbaden Biennale’ in Wiesbaden, western Germany.

But the statue  — depicting Erdogan with his right arm raised, evoking the statue of Saddam Hussein toppled by US forces in Iraq —  got daubed with graffiti, including the slogan "Turkish Hitler", German media reported, and a few hundred residents had protested against it.

Police said they could no longer guarantee people's safety so firemen used a large crane to take away the statue under the cover of darkness in the early hours of Wednesday.

Sven Gerich, the mayor of Wiesbaden, a German city of about 275,000 people just west of Frankfurt, said on Wednesday that he and city authorities valued freedom of art and sought to protect it, but that the statue had crossed a line.

"An art installation that needs to be protected by a massive police presence in order to ensure the public peace was not proportional," he said in a statement announcing that the statue, which went up Monday and was to have remained in place until the festival closed on Sunday, would not be reinstalled. 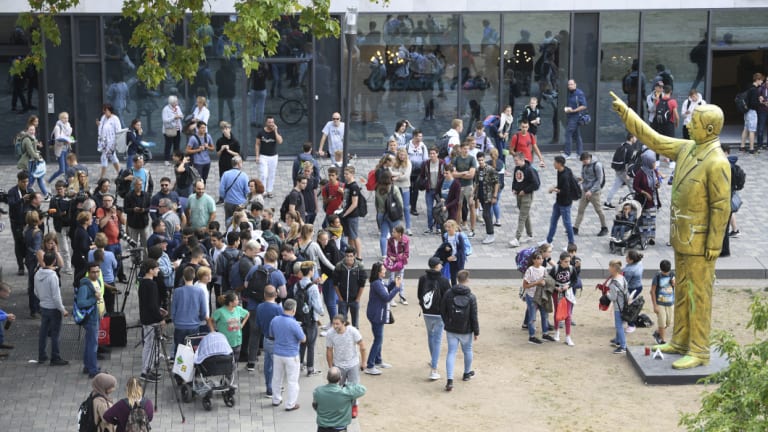 Maria Magdalena Ludewig, a curator for the Biennale, which is running under the motto "Bad News," had sought works and installations like the statue, hoping to foster the kind of open political debate that has become increasingly rare.

"We were aware that public room for consensus has become increasingly difficult," she said. "Each camp has become very hardened, as have the lines of conflict when they butt up against one another."

Some three million people with Turkish roots live in Germany and Erdogan, who in June won re-election with expanded powers, is due to make a state visit to Berlin on September 28-29 as part of efforts to improve relations strained by years of disagreement on a range of issues.

Germany condemned Turkey's arrest of some 50,000 people and the suspension or firing of 150,000 others including teachers, judges and soldiers, after a failed coup against Erdogan in 2016. Berlin says the crackdown was excessive and harmed basic freedoms. Ankara says it acted to safeguard national security. 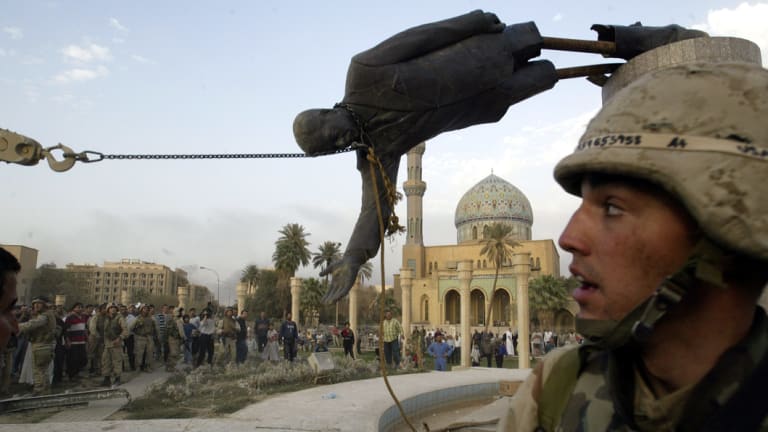 Iraqi civilians and US soldiers pull down a statue of Saddam Hussein in downtown Baghdad, in April 2003.

"It is certainly appropriate to conceive of Erdogan as a controversial figure, and one that we are allowed to discuss freely here in this country," the director of the biennial festival, Uwe Eric Laufenberg, told Reuters when the statue was erected on Monday.

"We can have a discussion about this statue and this man."

While some residents liked the statue, others objected.

"This is a man who has hundreds of people on his conscience… because he has lied and bought his way to power. He's a dictator," said resident Werner Starotsta.