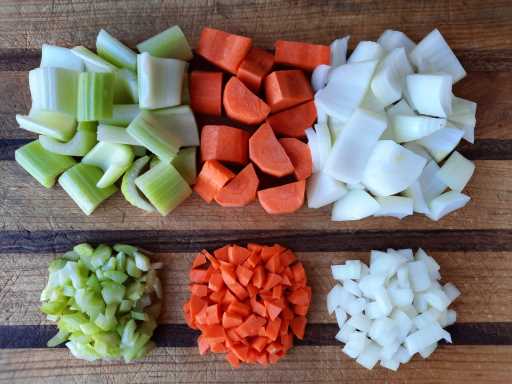 In a typical year — two of which we haven’t seen of late — Thanksgiving Day dinner is often the largest family meal that a cook prepares. It’s the most daunting; the most complex; the most fussed-about.

It needn’t be any of that, except still the largest. It might be rather everyday, in truth; it just requires planning.

“Mise en place” is kitchen-French for “planning.” (It’s French-French for “put in place” or “everything in its place.”) It is the greatest gift from France to the kitchen since butter.

Mise en place means having a well-stocked pantry and freezer or shopping to fill them. It means cutting up, prior to cooking, all the vegetables and other foods (the proteins, say) to be cooked. It means portioning out, in small bowls or on plates, other foods destined for the heat such as liquids or spices and herbs, or at the least taking the jars off the shelf or out of the frig.

In the kitchen, “mise en place” means “everything out on the counter, where I can see it, ready to go.” So that, if all the mise en place is, well, in place, all that’s to be done is the cooking, the eating, the cleaning. And the relaxing. That’s the point.

“What I find that people do when cooking for a group, like on Thanksgiving,” says Jamey Fader, longtime Denver chef and culinary director at Marczyk Fine Foods, “is worrying about so many fine details that it all catches up with them.

“Keep it simple,” he reminds. “Focus on ‘tastes great.’ Cook just five dishes, for instance, not 14.”

“Get in the right headspace,” Fader says, “which means to be relaxed and organized.” He and I both agree that “organized” is yet another English translation for “mise en place.”

Fader takes special pride in cleaning up as he goes, so that “in the end, after everyone’s eaten, all you have to do is put the dinner plates in the washer.” As an example, he says that, after mashing the potatoes, “put them in a serving dish that you’ll keep warm, and then right away wash out the pot you boiled them in and put that away.” In a sense, the serving dish of mashed potatoes then becomes part of that dinner’s “mise en place.”

“Mirepoix (a mix of celery, carrots and onions) can be cut up ahead in different sizes depending on different uses,” Fader says. “I rest my roasting turkey on large chunks of mirepoix and use smaller cuts in the stuffing.”

Other Fader suggestions for Thanksgiving mise en place: “Peel the potatoes and put them in water.” (Can be done days ahead if using the refrigerator.) “Never throw away the scraps from vegetable peelings; they go into stocks, either for right away or, if you freeze them, for the future.” (That includes onion skins which will lend their light brown color to lighter stocks such as those made from fish or fowl.)

As do some other cooks, Fader prepares two turkeys on Thanksgiving. “One is for that day,” he says, “and the other is for both leftovers to send home with others,” as well as for future stocks. Anthony Bourdain was well-known for preparing double turkeys, too, a “stunt” one for the table, dressed “like a showgirl,” and the second in the kitchen, already carved and ready to be served.

Additional Fader feast-day ideas: “I like to make sweet potatoes glazed in butter and orange,” he says, “and always cook the stuffing outside the bird.” (As with the mashed potatoes, after the stuffing is cooked, ideally in its serving container, “just keep it warm and it’s one less worry.”)

I asked Fader about a common concern of mine, that of adding too much salt to a dish, something that cannot be removed. “Always season (add salt and freshly ground pepper) at the end,” he says, the practiced chef’s way to prevent oversalting from the start.

Break apart or cut the roast chicken carcasses into pieces, especially at the joints, the more pieces the better. Set aside. Sear the 4 onion halves over medium-low heat in the (unoiled) pot that you will use to make the stock until the cut sides are very nicely browned.

Add back the chicken pieces and all the remaining ingredients and cover everything with water by 2 inches. Bring to a soft boil, then simmer, just, partially covered, for 3-4 hours, skimming fat or foam that might rise and replenishing with boiling water, if necessary, to keep everything submerged.

Strain the stock, through cheesecloth if you wish it clearer. When cool enough to handle, remove any meat from the bones to use for other preparations. Portion the stock as you wish and refrigerate it for use within a week or freeze it for use long-term.