KABUL (Reuters) – Afghan President Ashraf Ghani was sworn in for a second term on Monday but his main rival refused to recognize the inauguration and held his own swearing-in ceremony as a rival president. 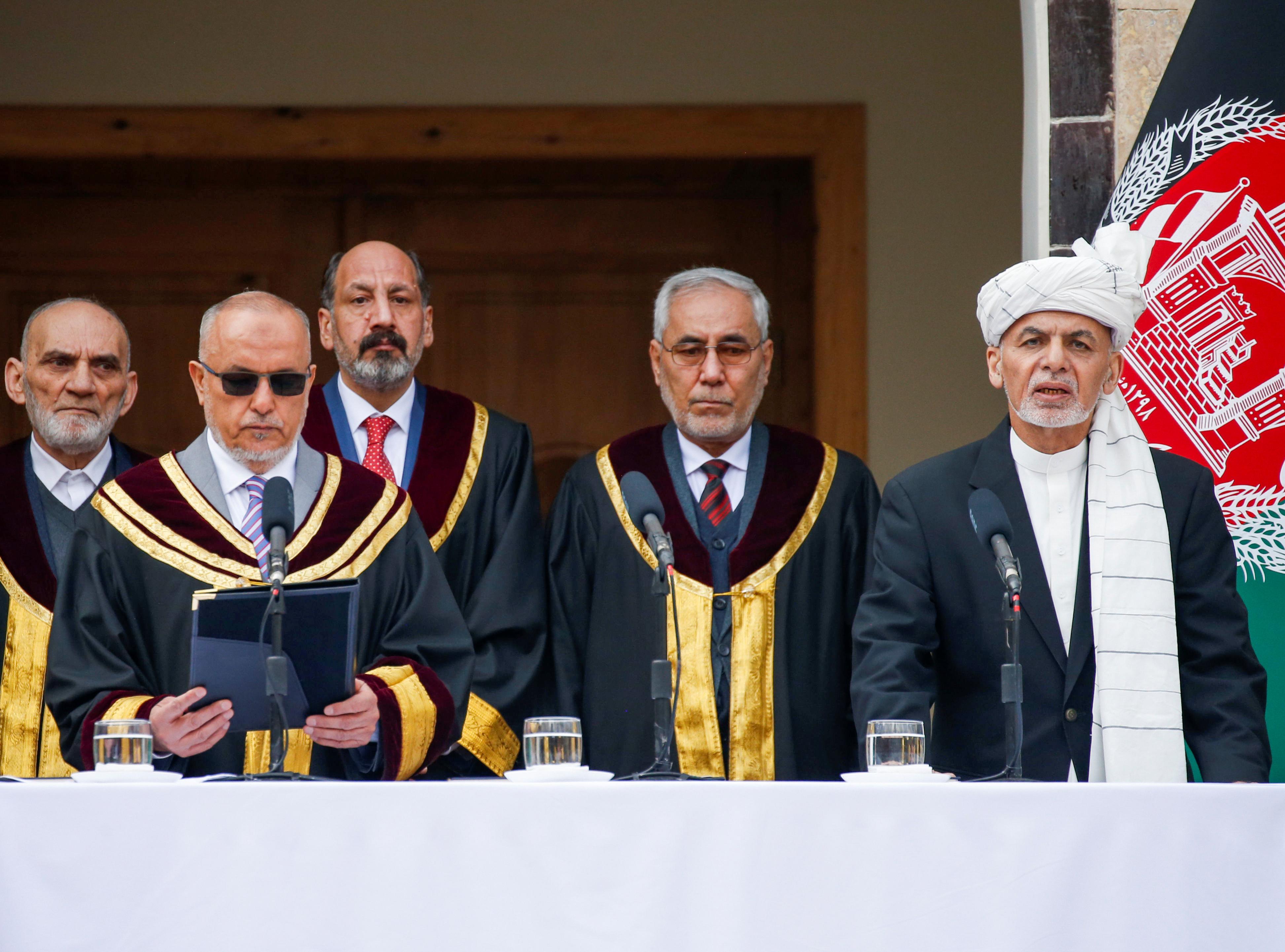 Both Ghani and former chief executive Abdullah Abdullah say they are Afghanistan’s rightful leader following a disputed election last September, a stand-off that threatens political chaos days after the United States and the Taliban signed a deal on the withdrawal of U.S.-led international forces.

Ghani’s ceremony was disrupted by the sound of two rockets hitting the edge of the compound of the presidential palace compound in the capital Kabul, Reuters witnesses said, but there was no word of any casualties and he continued his speech.

Planned morning ceremonies were postponed, and guests kept waiting, while U.S. Special Envoy Zalmay Khalilzad tried to broker a last-minute deal between the longtime political foes, but there was no immediate word of a breakthrough.

Television footage showed Ghani taking an oath at the presidential palace in a ceremony attended by foreign diplomats including Khalilzad and NATO forces commander Scott Miller.

Ghani said in a speech that the government he was forming would not include only members of his political camp though he would continue with the previous cabinet for two weeks.

“Then we will form an inclusive government after consultation,” he said.

He plans to finalize a negotiating team for talks with the Taliban on Tuesday and to make a further announcement on demands by the Islamist militant group for the release of 5,000 prisoners.

The Taliban, which ruled Afghanistan from 1996 to 2001 and has been waging an insurgency since shortly after its fall from power, has made their release a condition for talks but Ghani said last week he had rejected the demand.

Diplomats are now waiting to see whether Abdullah appoints rival ministers and governors, and whether they take up office by force, said two diplomatic sources who declined to be named.

Ghani and Abdullah have been holding talks with U.S. special envoy Zalmay Khalilzad as he tries to secure a deal between the two camps, an official for Ghani said earlier on Monday.

“We have been in serious negotiations with the Abdullah team since last night, and it is still underway,” the official said, requesting anonymity because he was not authorized to speak to media. Details of the talks were not made available.

The Election Commission last month announced that Ghani had retained power by winning the Sept. 28 election. But Abdullah rejected that and proclaimed himself winner.

Ghani and Abdullah both held roles in the previous government under a U.S.-brokered power-sharing agreement that followed the previous election in 2014.

The government is meant to be preparing for talks with the Taliban, to follow up on the Feb. 29 pact on the withdrawal of U.S. troops after 18 years of war.

Abdullah had offered to postpone his ceremony if Ghani did the same, Abdullah’s spokesman, Omid Maisam, said. Ghani’s team later said he had postponed his inauguration until the afternoon.

Four diplomatic sources said the negotiations led by Khalilzad were not going well and the chance of reaching a solution was fading. The U.S. embassy declined comment on the negotiations. 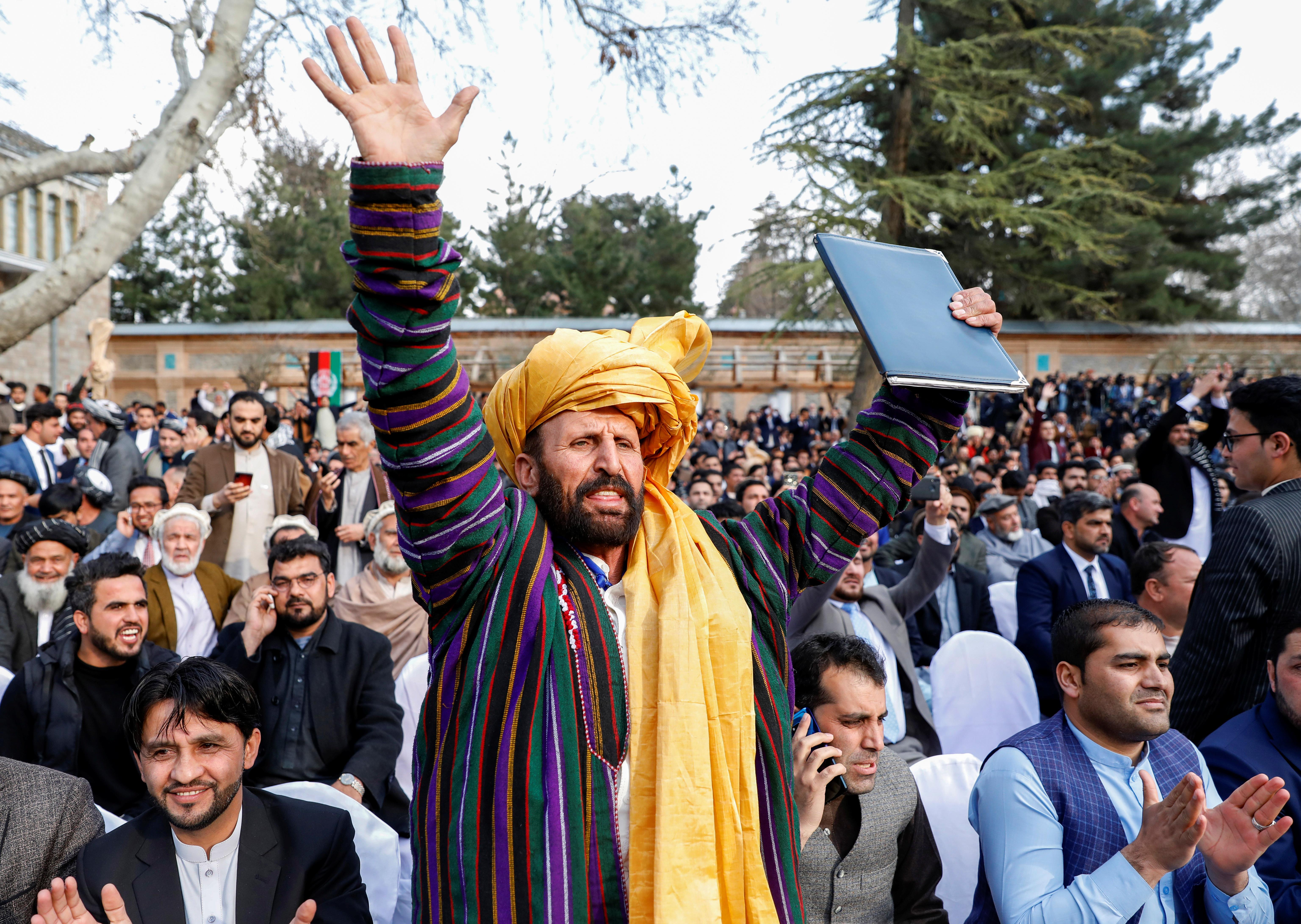 Abdullah called for what he described as a fraudulent votes to be ruled invalid.

“No one should have underestimated our commitment to genuine democracy,” he said on Twitter. “Invalidation of all fraudulent votes is the way out.”