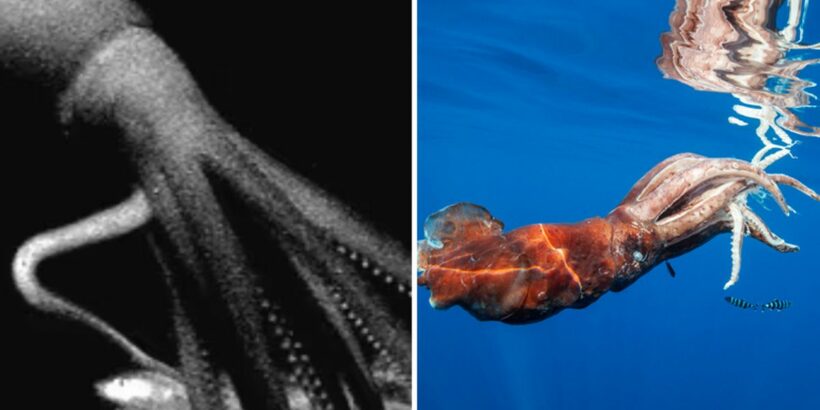 A giant squid hunting its prey deep underwater has been captured on camera for the first time.

The sea creature is difficult to film as they live thousands of feet under the sea, where there is no light or noise.

The animals that thrive down there are typically scared off by noise and lights of cameras and equipment and the intense pressure of the water also makes it hard to travel down.

However, researchers created a camera platform that is unobtrusive and attracted the creature using a fake bioluminescent jellyfish.

The 20ft juvenile giant squid was caught feasting in the Gulf of Mexico and is the first of its kind filmed in US waters.

The footage has suggested the sea creature stalks its prey rather than hiding and waiting to pounce.

The creepy footage begins with the squid slowly appearing in the background before using a tentacle to attach itself to the robotic jellyfish.

It then wraps several suckers around it in a bid to launch an attack.

When it proves unsuccessful it then swims away before coming back several times to check out the potential meal.

At one point, the camera picks up the head of the squid before it jets off above.

Although several dead specimens have washed up on shore, the first images of a living animal of its kind in the wild weren't recorded until 2004.

And the first-ever video wasn't obtained until eight years after that.

Marine biologists of the National Oceanic and Atmospheric Administration (NAOO) captured the Architeuthis dux hunting in the wild in 2019, but have only now just released an analysis of its behaviour.

A decoy jellyfish was attached to a special platform with a built-in camera almost 2,500 feet under the water.

The decoy, named E-Jelly, was curated to attract the creature by imitating the signs given off by the jellyfish when in distress.

Previously, experts believed the giant squid waited to ambush potential prey due to its size and length but the clip reveals it stalks the creatures before going in for the deadly strike.

The creature of the black deep ocean can grow to more than 40feet long and has eyes the size of basketballs.

It has inspired legends of the Kraken and other sea monsters over the centuries, even though our knowledge of it is limited.

"There's something instinctual about these animals that captures the imagination of everyone — the wonder that there are these huge animals out there on our planet that we know so little about, and that we've only caught on camera a couple of times."