Girls as young as three are being married off in war-stricken Yemen because their families are unable to afford to feed them, according to charity Oxfam.

Starving Yemeni families have revealed how they have had no choice but to force their young daughters to marry much older men, in order to use the dowry for food and shelter to save the rest of the family.

The war in Yemen has triggered what the United Nation has called the world’s worst humanitarian crisis, with more than ten million people at risk of starvation. 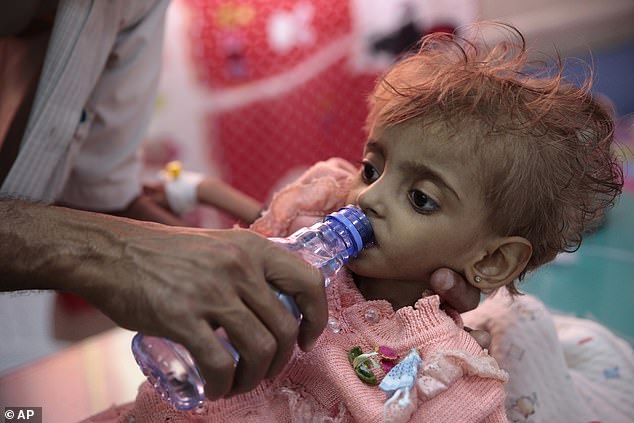 The war in Yemen has triggered a humanitarian crisis, forcing families to resort to desperate measures, such as marrying off daughters as young as three (file photo)

A recent UN report suggests that more than two-thirds of girls in Yemen are wed before the age of 18, however the five-year conflict is reportedly forcing families to marry them off at a much younger age.

Oxfam said their representatives had met with families in the northern Amran governorate who had been forced to marry off their daughters – in one case as young as three years old – to buy food with the dowry.

Younger girls are usually spared consummating the marriage until they have reached the age of 11, but before that are made to do household work in their husband’s home.

Nine-year-old Hanan, from Amran, used to go to school but since she was married, she has had to stop.

‘My mother in law keeps beating me, and when I run away back to my father’s house, my father beats me again for running away,’ she said. ‘I don’t want to be married. I just want to go back to school.’

Hanan’s parents, who also married off her three-year-old sister, said they knew marrying off their daughters at such a young age was wrong, but felt they had no choice because the dowry paid in return was the only way of keeping the rest of the family alive. 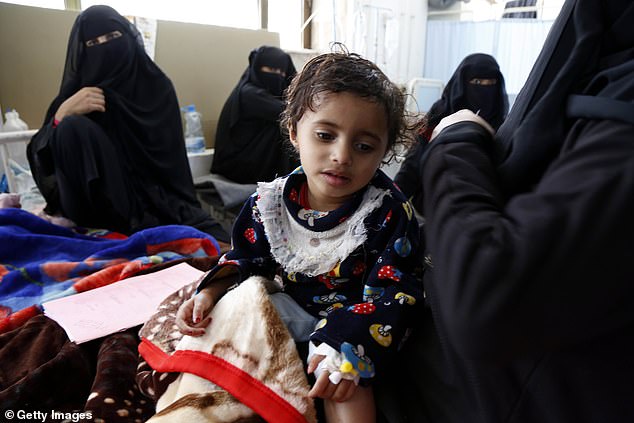 Children, pictured here at a malnutrition unit in a Sanaa hospital, are among those worst affected by the humanitarian crisis that has left million starving as a result of the war

Over 24 million Yemenis – more than three quarters of the country’s population – are now dependent on some form of aid for survival, according to the UN.

The Red Sea province of Hodeida has witnessed some of the Yemen war’s most intense fighting, which has eased since the government and Huthi rebels agreed to a ceasefire in the area in December.

The Iran-backed Huthis have battled the government and its allies in a coalition led by Saudi Arabia and the United Arab Emirates for control of the impoverished country for four years.

Hodeida, held by the rebels since 2014, has witnessed intermittent clashes between the Huthis and pro-government forces since the ceasefire went into effect on December 18.

Around 10,000 people – mostly civilians – have been killed and more than 60,000 wounded since Saudi Arabia and its allies joined the conflict in 2015, according to the World Health Organization.

Rights groups say the real figure could be five times as high.