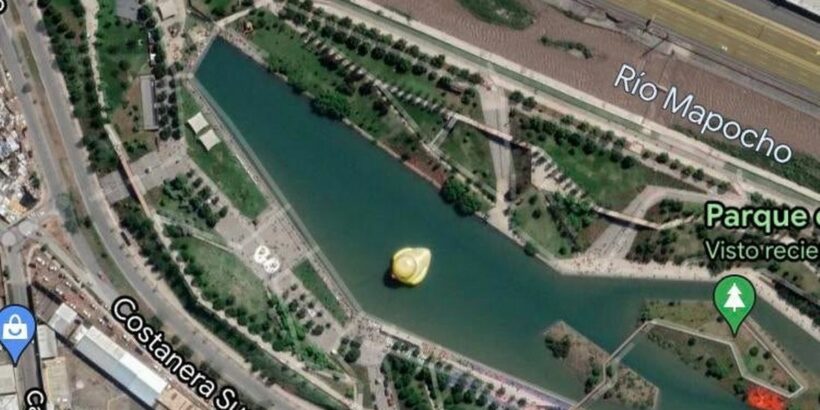 A Google Maps user has been left baffled after he spotted an "enormous" rubber duck floating in the middle of a lagoon.

The discovery was uploaded by Reddit user 'u/_Nefasto' and has left several users confused as to why it is located on the shore of the artificial Lake of the Family Park in the middle of Santiago – the capital of Chile.

A fellow Reddit user was quick to comment on the size of the duck, writing: "Dang! That thing is enormous!"

Another user commented: "For a moment at first glance, I thought this was the Canadian F1 track."

A third explained how he had seen one before at his university campus: "We used to have one of these at my college at the University of North Florida. Stayed there for years."

The reason as to why the sculpture is located there is because it's part of an open-air exhibition by world-renowned artists which was unveiled in November last year.

The exhibition also includes installations of giant fried eggs that people can walk over, as well as a toy robot.

The duck is the work of Dutch artist Florentijn Hofman, while Henk Hofstra and Thomas Dambo, are responsible for the fried eggs and toy robot respectively.

What do you think about the strange find on Google Maps? Let us know what you thought it was in the comments below!

One of the visitors who saw the massive rubber sculpture said: "I think this is a great opportunity for the family to go out, rest, and enjoy open spaces as well as to enjoy works of art."

The exhibit was only in Santiago for a few days, before going on display in other cities in the South American country and it's just a coincidence that the Google Maps image was taken during the time when it was there.