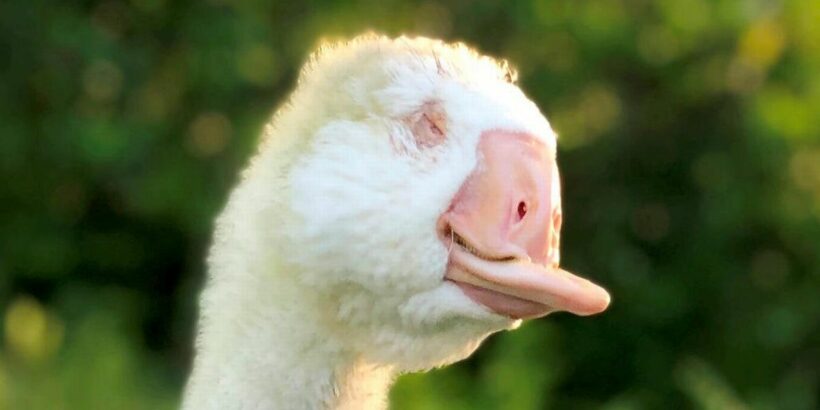 A two-year-old goose born with no eyes and only half a beak now lives a life of luxury among retired chickens.

Nibbler was rescued from a farm by animal lover Marina Somma when he was just a chick, where he would have been culled for his facial deformities.

The 28-year-old freelance writer took the gosling back to her sanctuary in Flagler County, Florida after finding him for sale on a Facebook group for pet geese in March 2019 when he was only a few days old.

She said: "When he was a baby he certainly had the baby-cute thing going for him, but he's always been a bit shocking on first impression regardless.

"Despite the fact, the group wasn't a local group, within a day or two of joining I saw a post about him and realized he was only 20 minutes or so from me.

"I'm not a big 'fate' person, but it was a little too much of a coincidence for me to just keep scrolling."

Now, the completely blind Sebastopol goose now spends his days charging about with a flock of senior hens, eating and swimming in his own pool as Marina regularly posts updates of him on her TikTok, @DarkWingsWildlife.

Marina, who now has over 2 million views, said: "He does sometimes get zoomies though – trouble is, when he has zoomies, he can run into things, so he likes to spin in circles instead."

But trolls argue that Nibbler's disabilities mean he doesn't have the quality of life, but his loving owner knows he is thriving on her 15-acre property.

She said: "As long as Nibbler is healthy and happy he deserves to live, as does any animal.

"His deformity reminds me more of a very severe cleft palate than anything else.

"He was healthy as any other little gosling! He just needs a bowl of feed that is a bit deeper so he can scoop it out more easily."

She went on: "He can even find his food and water on his own despite the fact he has a whole paddock and stalls to roam."