Cottage with gorgeous sea views goes up for sale for just £175,000 because it is just 18ft from crumbling cliff edge so buyers won’t be able to get a mortgage

A coastal cottage with stunning sea views will be sold off for just £175,000 – but there is a catch.

The beautiful three-bedroom home sits 18ft from the edge of a crumbling cliff, so the person who buys it will be literally living on the edge.

The outgoing owners of the aptly named Cliff Farm near Trimingham in Norfolk have lived happily in their home for 18 years but decided to sell two years ago when it was put on the market for £400,000.

But its perilous position on the Norfolk coast, where other properties have been lost to erosion, put off potential buyers.

In fact, it is so close to the edge it is impossible to get a mortgage on the three bed house.

Now, it will be sold at an auction to a cash buyer for a much-reduced estimated price of £175,000. 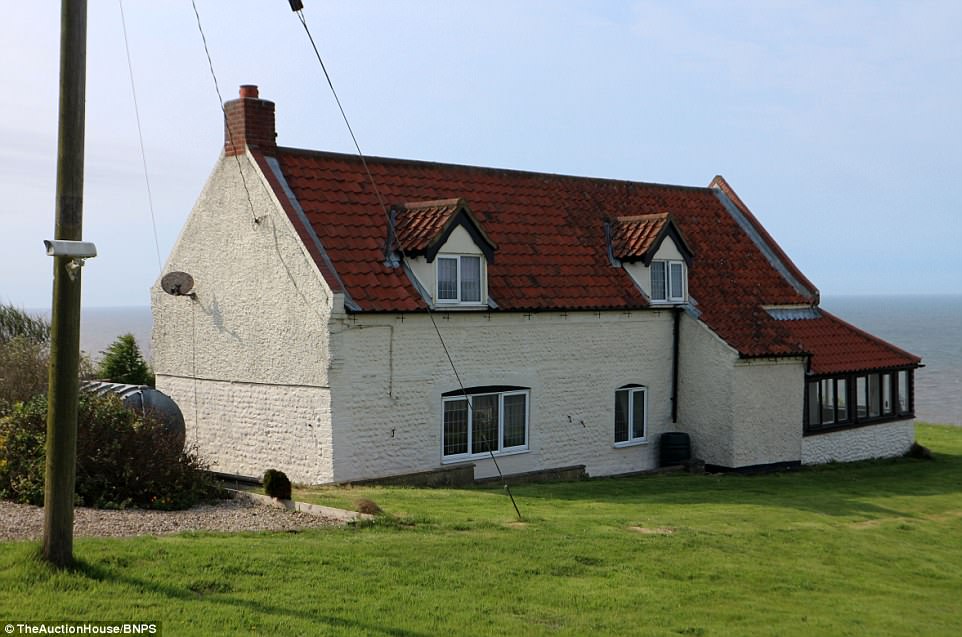 This coastal cottage with spectacular sea views is up for sale for a bargain £175,000 – because it sits just 18ft from the edge of a crumbling cliff 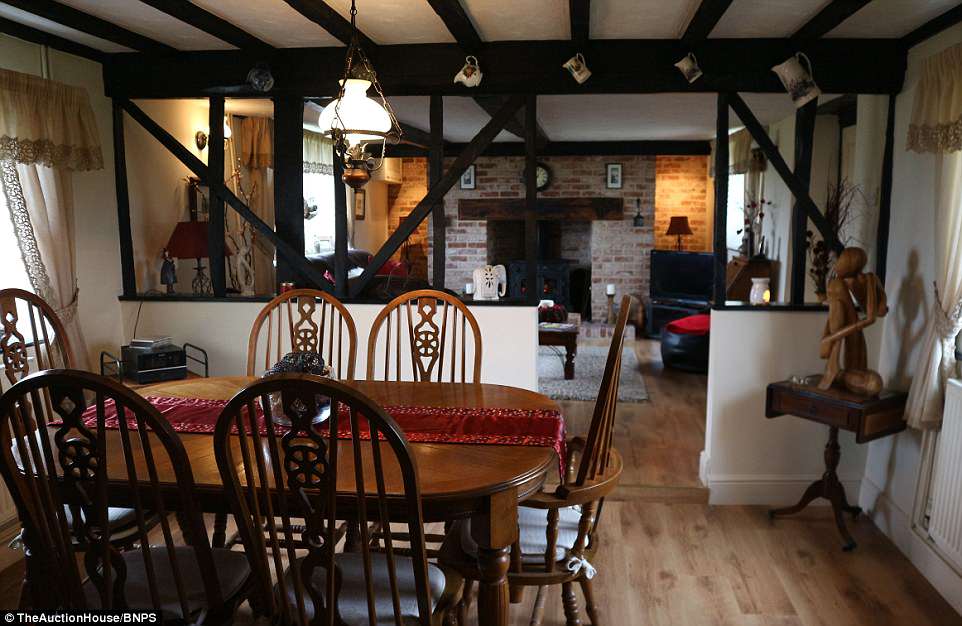 Cliff Farm is 18ft from the edge of a crumbling cliff but it could remain standing for five decades to come, according to the auctioneer tasked with selling it 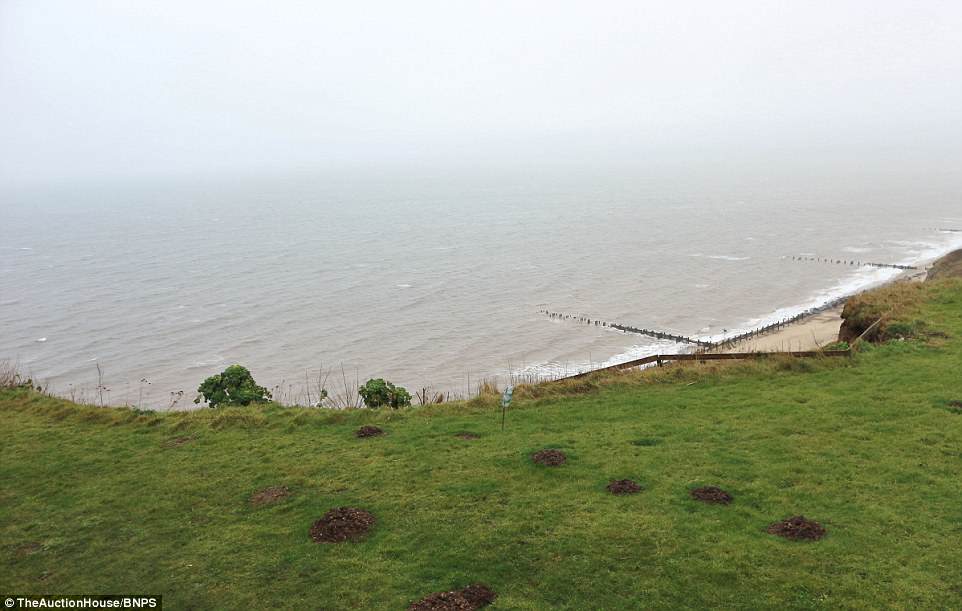 The cliff is close to the house which provides major uncertainty, however, it also give stunning views of the sea from the top

Erosion on the coast at Trimingham

An expected loss of less than 10 residential and commercial properties, as well as the loss of local roads.

Between 10 and 30 properties are expected to be demolished as a result or erosion (commercial and residential) in Trimingham and Sidestrand.

There will also be a loss of a section of the main coast road linking Trimingham to adjacent towns and villages.

The MOD facility could be relocated over fears it will be lost and thereis expected to be a further loss of main roads linking Trimingham to adjacent towns and villages.

By then, experts say there could be a total loss of up to approximately 85 hectares of Grade 3 agricultural land.

The auctioneer handling the sale said that whoever gambles on the detached cottage may find it at the bottom of the 80ft cliff in a few years time.

Alternatively, there may not be any further erosion for another 50 years and the winning bidder could pick up the property deal of the century.

Although the auction house says there is no geological survey done on the exact cliff area next to the house, other reports say up to 100 buildings could be lost in the area of Tringham by 2105.

A Shoreline Management Plan (SMP) led by North Norfolk District Council, Great Yarmouth Borough Council, Waveney District Council, the Environment Agency showed while there are defences in place at the foot of the cliff by Cliff Farm, there will not be a renewed push for investment in the cliffs at nearby Trimingham.

According to the study erosion is ‘necessary’ in some areas and it would not be economically justifiable to pump money into areas like Trimingham to stop erosion.

By their estimates, by 2025 there will be a loss of around 10 properties in the area – although it is not clear which properties it is predicting here.

By 2105 the nearby Trimingham Church is expected to be gone, with a ‘total loss of up to approximately 85 hectares of Grade 3 agricultural land’.

The report states: ‘Because of the rapid natural erosion rates here, fixing the shoreline in any location will result in a sizeable promontory forming. Along this section, this would be likely to act as a terminal groyne in the long-term, with material reaching this point more likely to be deflected offshore and lost altogether rather than either remaining as a beach in front of these defences or reaching destinations downcoast.

‘However, there are numerous assets that would be affected by wholesale abandonment of defences through this area, notably the sizeable villages of Overstrand and Mundesley, Bacton gas terminal, and the smaller settlements of Trimingham, Bacton, Walcott and Happisburgh. The continued defence of these areas is not sustainable.’

Cliff Farm is only about 24 miles up the coast from Hemsby where the sand dune cliff recently collapsed, however, the owners of the property say there have been no collapses in their area recently. 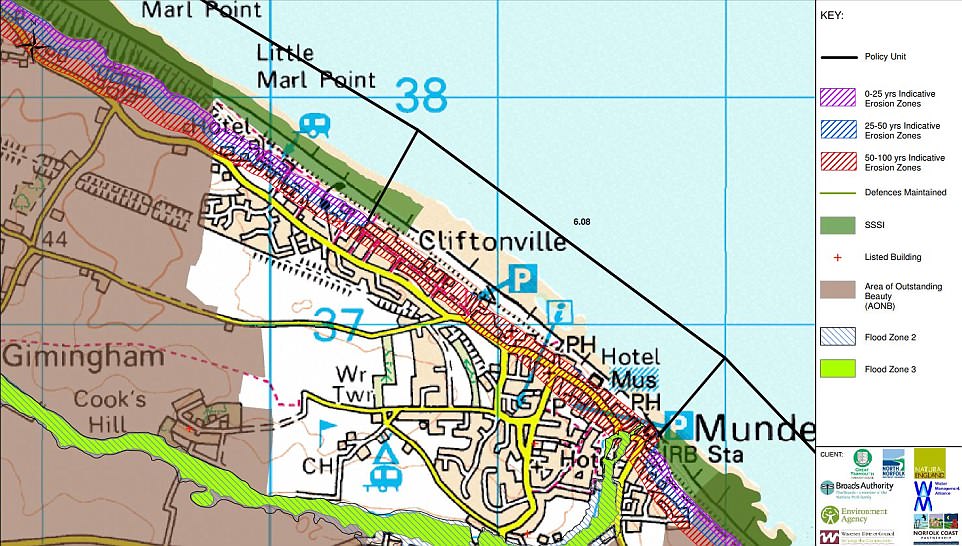 The cottage, in the village of Trimingham, near Cromer, has a lounge, dining room, kitchen, conservatory, kitchen, garden room, three bedrooms and a bathroom.

Outside, there are lawns to the front and side and 18ft of grass at the rear that leads to the cliff edge.

Bryan Baxter, of property auctioneers Auction House, said: ‘It is a lovely cottage that has previously been valued at £400,000. 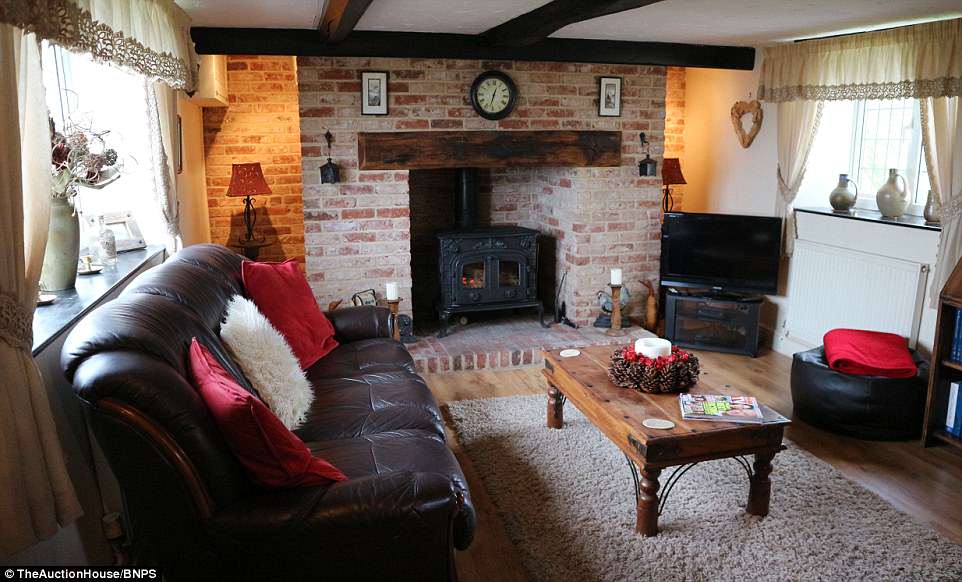 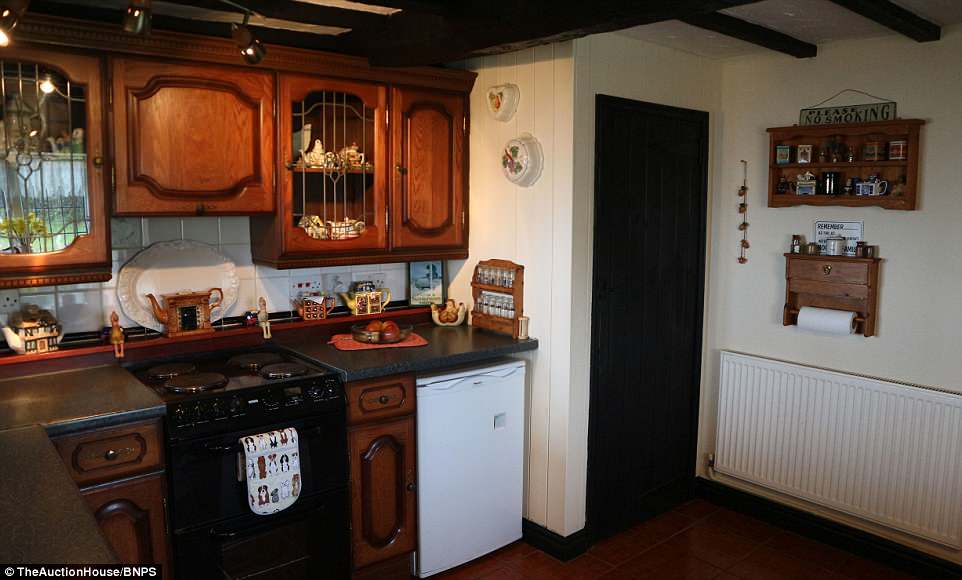 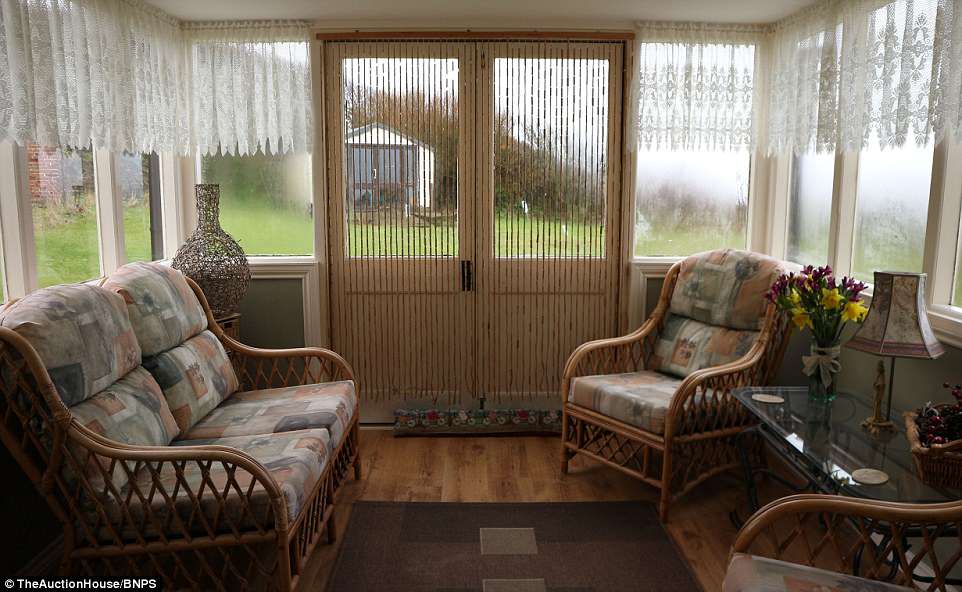 The property sits on the clifftops overlooking the sea and is surrounded by large mainly lawned, private gardens. The property, which is suitable for cash buyers only, provides a unique permanent residence or holiday home 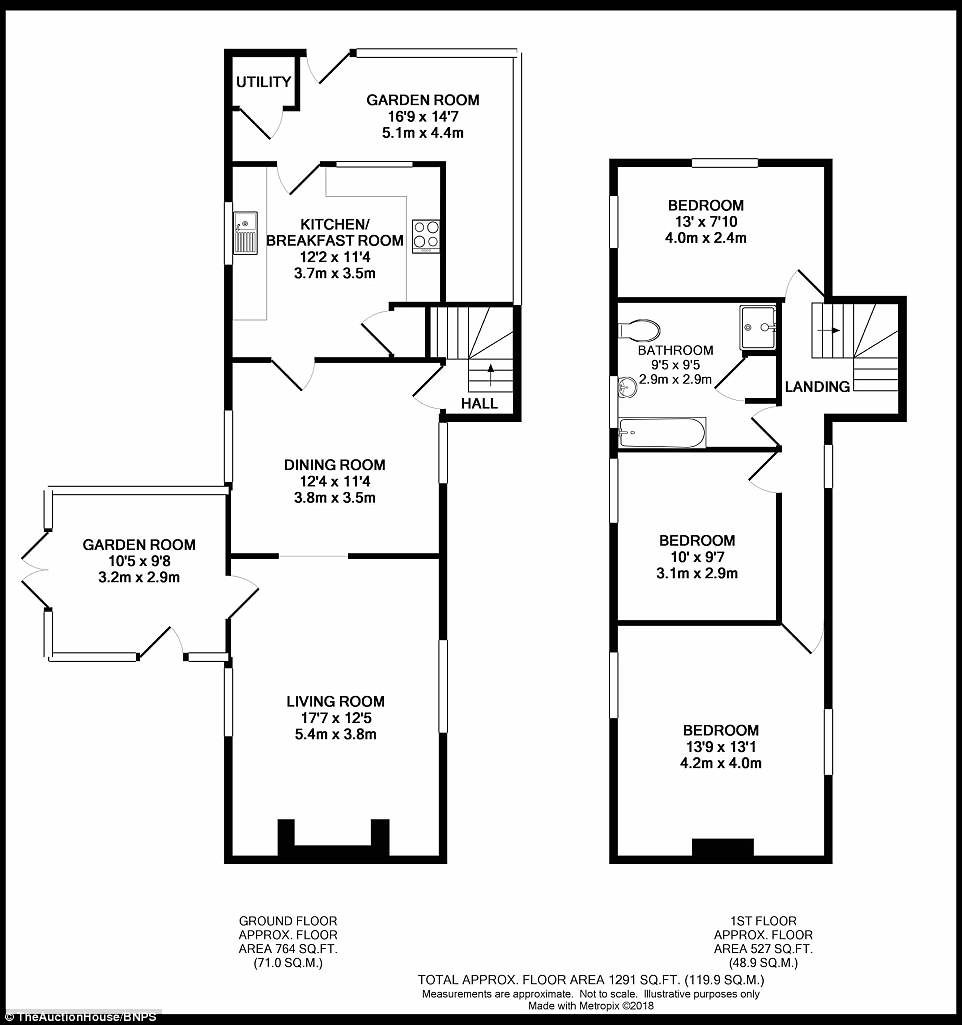 The property plan: The three-bedroom home has a garden room as well as utility space and a large landing area

‘But it is about 18ft from the edge of the cliff and is a bit of a ticking time bomb.

‘The current owners have lived there permanently for 18 years and in that time the cliff edge hasn’t gotten any closer.

‘But further along the cliff there have been parts that have slipped away and some bungalows have been lost.

‘The time has come for the owners to move on.

‘The property could be there for another 100 years without any further falls but on the other hand if the cliff falls away in years to come the cottage could go with it. 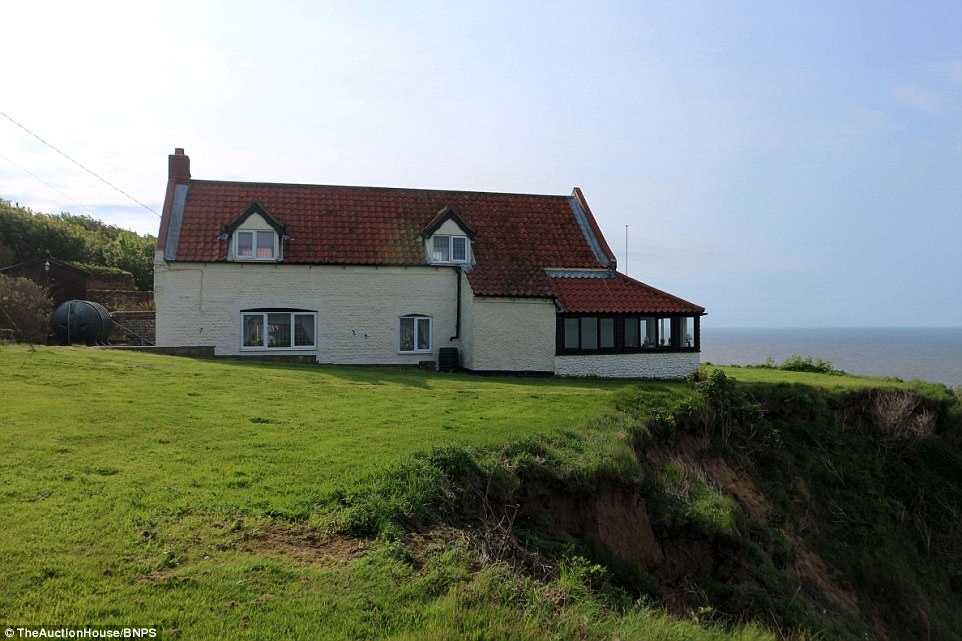 The outgoing owners of Cliff Farm have happily lived on the edge for 18 years but decided to sell two years ago when it was valued at £400,000, but the value has slipped because of the cliff edge 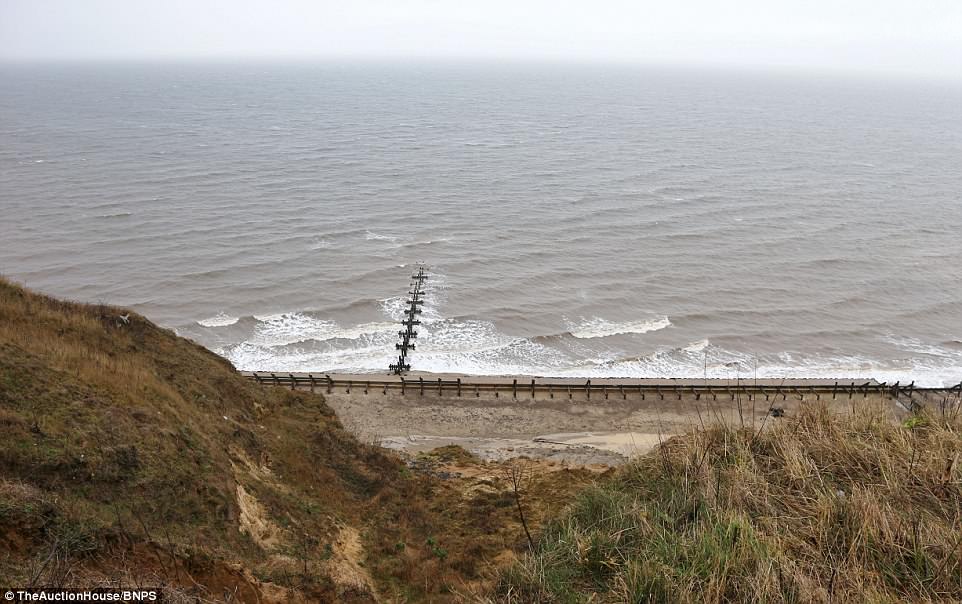 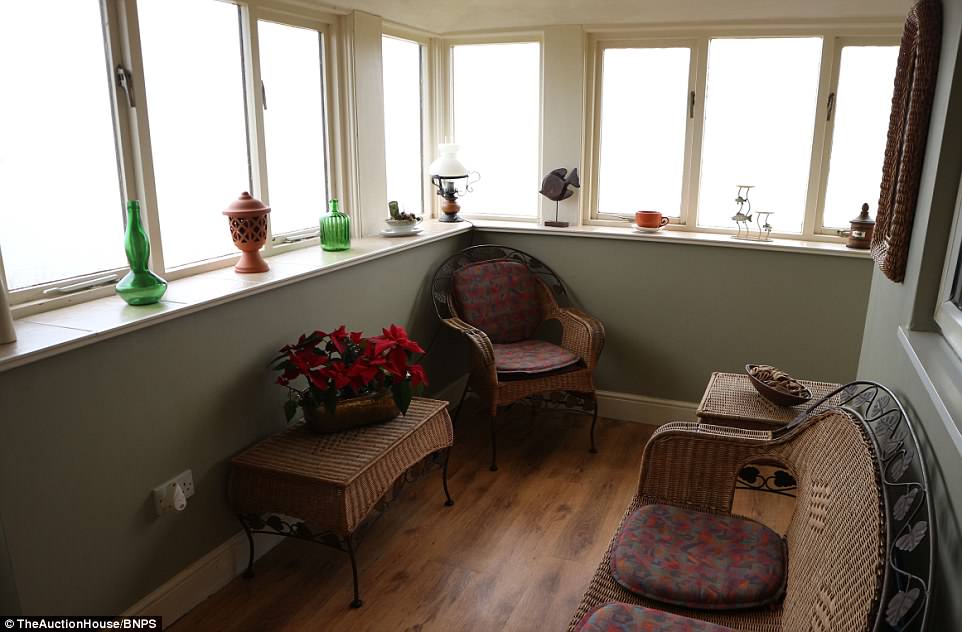 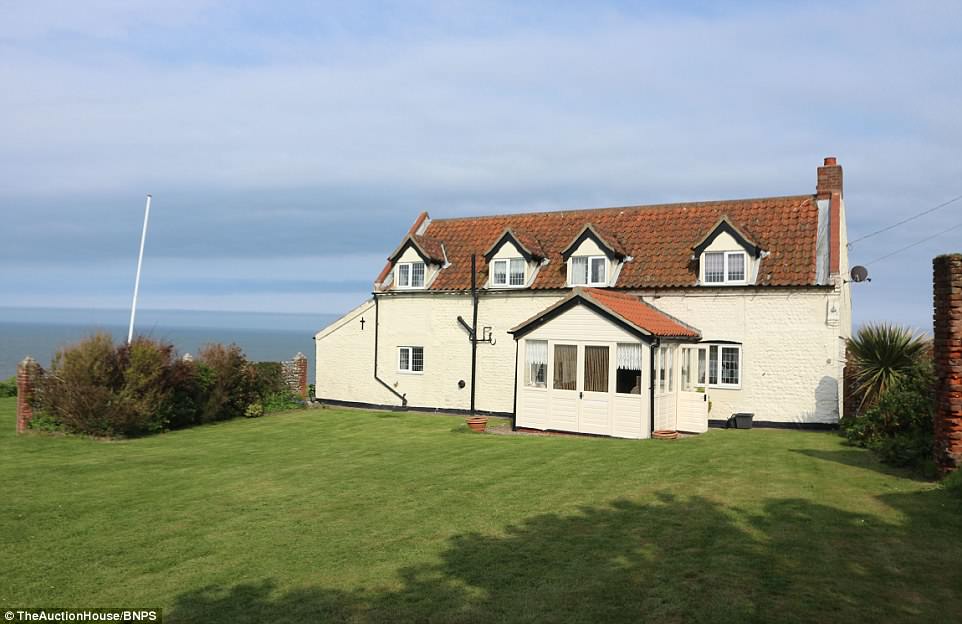 ‘We have had limited interest and people have had the opportunity to visit and assess the situation for themselves.’

The cottage will be sold on Thursday.