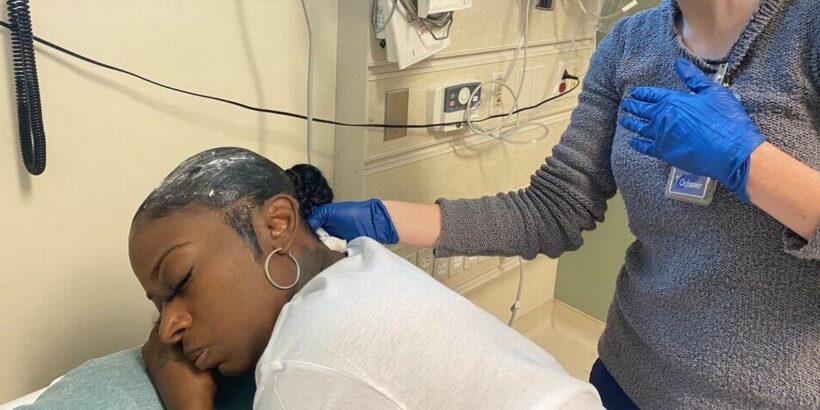 A man who copied 'Gorilla Glue Girl' Tessica Brown has ended up in the emergency room.

He applied the powerful adhesive to his lip after believing Tessica was lying about her ordeal.

Tessica, from Louisiana, has had her hair stuck solid in place for an entire month after using the glue as hairspray when her usual product run out.

After trying home remedies to remove the glue she went to St Parish Hospital in Chalmette, where health workers attempted using acetone to remove it.

Len Martin, 37, also from Louisiana, said he tried the Gorilla Glue challenge for himself to prove that it was "not as serious as she was trying to make it."

Martin told WKBN: "I thought she was just playing around because I didn't think it was that serious.

The aspiring rapper filmed himself attaching a Red Adhesive cup to his upper lip.

He thought he would be able to lick it off and moisten it to pull it off his lip – but it didn't work.

He had to attend the emergency room where a doctor performed a "painful peeling". “This is definitely not one to try. Let’s just stop this now … It’s very harmful,” Martin said.

Tessica has reportedly suffered burns to the back of her head due to the treatment and bids to remove the glue.

Reports claim she has flown to California for treatment from plastic surgeon Dr Michael Obeng.

It's alleged Tessica plans to sue the company, according to TMZ, and is considering hiring an attorney.

Following the ordeal, Tessica uploaded a video to her 752,700 followers on TikTok where she explained what had happened.

Gorilla Glue was made aware of the situation and has since tweeted a statement.

It read: "We are very sorry to hear about the unfortunate incident that Miss Brown experienced using our Spray Adhesive on her hair.

"We are glad to see in her recent video that Miss Brown has received medical treatment from her local medical facility and wish her the best."