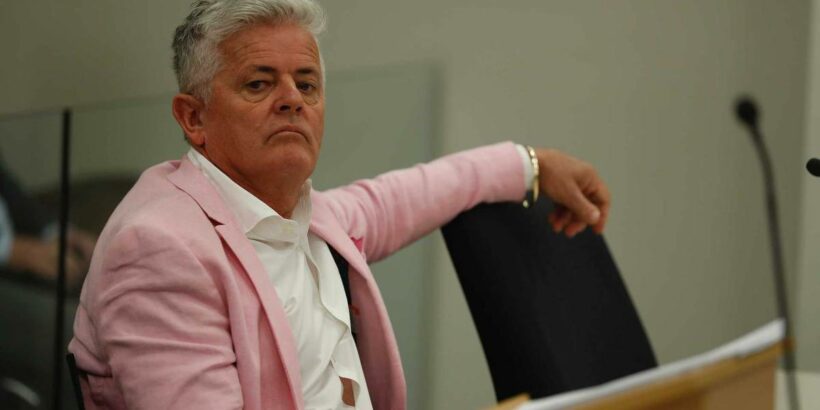 The owner of HeadQuarters in the Viaduct, was the first and to date only person to be charged by New Zealand police after numerous suppression breaches before and after the high-profile murder trial of Jesse Kempson in November 2019.

Others have been given warnings by police for identifying the British backpacker’s killer before he lost his name suppression last December. Kempson’s suppression remained long after he was sentenced to life imprisonment for Millane’s murder because he faced two further trials for violent sexual offending against two women.

Kempson was found guilty of all nine total charges at both judge-alone trials last year, which he is now appealing. The sentences for all his crimes will be served concurrently, which includes a non-parole period of 17 years.

Before Kempson was named, however, Molloy took it upon himself to let others know of the murderer’s identity.

Today, the businessman, dressed in a pink blazer, was sentenced to 150 hours of community work and fined $15,000 by Judge Peter Winter in the Auckland District Court.

Molloy’s lawyer, David Jones QC, had sought a discharge without conviction for his client to avoid a potential disqualification of his veterinarian and bar manager’s licences and overseas travel.

Neither Molloy or Jones would comment on a potential appeal to overturn the conviction.

Jones told the court Molloy had a “deep rooted sense of justice and fairness” which drove him to name Kempson after believing Millane was victim shamed during the trial.

“He offended through, if I can call it, honourable motivation.”

Jones added Kempson’s identity was “one of the worst kept secrets” because of breaches by international news organisations and social media users.

“With all due respect, the identity of Mr Kempson was well-known to anyone who wanted to Google it in a few seconds,” Jones said.

The lawyer said his client also “had more direct knowledge” of Kempson’s character.

Court documents released to the Herald by Judge Winter show Molloy’s offending began on November 22, 2019, when Kempson’s jury was deliberating.

Molloy started a discussion on the NZ Premier Racing Community’s website, where the 65-year-old is known as “poundforpound”.

The court documents show Molloy wrote: “He got name suppression because he’s also up on another independent rape charge … he needs a bullet.

“… I put it here because this forum has the traffic and people need to know about this dog.”

Later in the evening Kempson was found guilty of murder.

At 8.58pm Molloy made another post on the forum naming the recently convicted murderer, court documents show.

“Jesse Kempson was an employee of my sisters at her restaurant bar, Oyster & Chop, and he flatted with my niece for a short period before he was asked to leave due to his inappropriate behaviour,” Molloy said.

“Just saying, and that is a fact.

When spoken to by police, court documents show, Molloy said Kempson had “no rights”.

“Why should he be protected when this poor little girl wasn’t, and her family wasn’t.”

Molloy also faced a second charge, but this was earlier withdrawn by police.

There were several breaches of Kempson’s name suppression after his arrest and first court appearance during December 2018 for murdering Millane.

One person sitting in the public gallery at the first hearing in the Auckland District Court posted a photo on their Facebook page, while the UK and Australian press also named Kempson.

The blatant breaches caught the ire of then Justice Minister Andrew Little and the Bar Association, while one London newspaper also replied to the concerns of a Millane family friend by saying “the law in New Zealand does not apply” to them.

The officer in charge of the case, Detective Inspector Scott Beard, warned New Zealanders it was a crime to identify the then accused killer on their social media pages, and Prime Minister Jacinda Ardern also commented on questions about the effectiveness of suppression laws in the internet age.

But it was Google’s algorithm which was responsible for arguably the biggest breach when it inexplicably sent a mass email to its Kiwi subscribers naming Kempson. The tech behemoth was later warned by police and apologised.

In the days before Kempson was named last year, Court of Appeal President Justice Stephen Kós said of Kempson’s suppression: “His identity has been published. You put his name into a computer and you find it.”

In the court’s decision declining the killer continued secrecy he added “it is time now for a dose of reality”.

“While the New Zealand media deserves great credit for its obedience to the suppression orders made in the High Court and this court, these orders have not been effective in overseas jurisdictions.”

The Court of Appeal also dismissed Kempson’s challenge against his murder conviction last year, however, the now 29-year-old’s legal team has signalled a final challenge to the Supreme Court.

A Herald investigation about the increasing reach and presence of global tech giants earlier found information suppressed by New Zealand’s courts in high-profile cases could be easily revealed searching for key terms on Google, Facebook and Twitter.

Justice Minister Kris Faafoi earlier told the Herald there were no current plans to amend legislation relating to suppression.

Ministry of Justice officials and other agencies, however, are having ongoing discussions with tech and social media companies about how breaches of suppression orders can be quickly identified and removed from their platforms, Faafoi said.

In January 2019, Ardern also raised the issue at a dinner with Google executives at the World Economic Forum in Davos, Switzerland.

While breaking a suppression order is not an extraditable offence for those who do so overseas, people in New Zealand face up to six months’ imprisonment or a $25,000 fine.