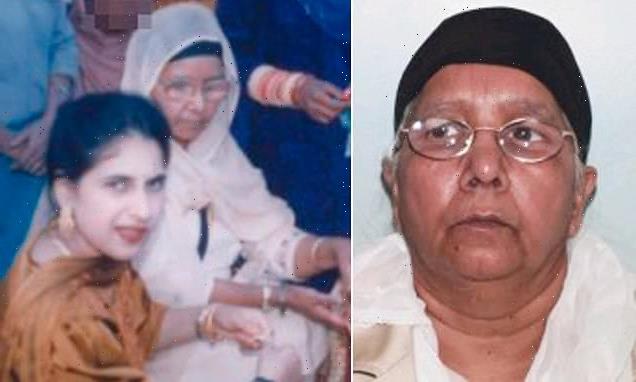 Grandmother, 85, who arranged for her daughter-in-law, 27, to be lured to India and murdered after she cheated on her son is set to be FREED from jail

A tyrannical grandmother who arranged for her own daughter-in-law to be lured to India and murdered will be free in weeks.

Brutal Bachan Kaur Athwal, then 70, was one of the oldest people to be jailed for murder when she was convicted in 2007.

Bachan and son Sukhdave Athwal, then 43, were sentenced to life after being found guilty of the honour killing of Surjit Athwal, 27.

She disappeared after going with her mother-in-law from the UK to India for a family wedding in December 1998. Her body has never been found.

The Parole Board announced today that Bachan. now 85, can now be released on licence.

‘Parole Board decisions are solely focused on what risk a prisoner could represent to the public if released and whether that risk is manageable in the community.

‘A panel will carefully examine a huge range of evidence, including details of the original crime, and any evidence of behaviour change, as well as explore the harm done and impact the crime has had on the victims.

‘Members read and digest hundreds of pages of evidence and reports in the lead up to an oral hearing. Evidence from witnesses including probation officers, psychiatrists and psychologists, officials supervising the offender in prison as well as victim personal statements are then given at the hearing.

‘The prisoner and witnesses are then questioned at length during the hearing which often lasts a full day or more. Parole reviews are undertaken thoroughly and with extreme care. Protecting the public is our number one priority.’

In a summary, the Parole Board said that Bachan was in ‘very poor health. She suffers from dementia, is physically frail and lacks mental capacity.’ 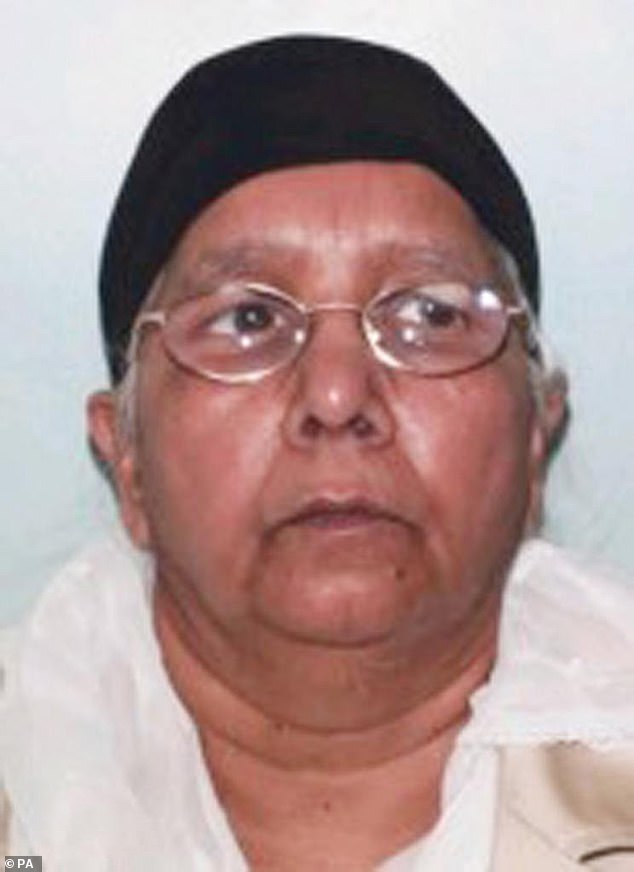 Brutal Bachan Kaur Athwal, then 70, was one of the oldest people to be jailed for murder when she was convicted in 2007

Bachan and Sukhdave – both Sikhs – were convicted of murder at the Old Bailey and sentenced to life imprisonment.

The case made history as it was the first conviction in a British court of an honour killing committed outside of the UK.

Surjit was forcibly wed in 1988 at the age of just 16, and endured ten years of an unhappy and abusive marriage.

She lived with her strict husband and his mother in a home they shared in Hayes, West London,

Widowed Bachan ran the family home with an iron fist, with Surjit treated like a slave.

In Bachan’s mind, she posed a threat to the family’s good name.

Despite beatings from her husband and mother-in-law, Surjit rebelled.

She found a job in customs at Heathrow Airport, dressed in Western clothes and wore make-up, and went out with new friends.

Bachan was ashamed of Surjit’s Western ways and ordered the so-called honour killing to preserve their warped family code.

In November 1998, Bachan told family members: ‘We have to get rid of her.’

After she was lured to India, Bachan’s brother Darshan Singh allegedly strangled her.

When local police began a probe, bus driver Athwal visited his local Labour MP John McDonnell and persuaded him to write an official letter on House of Commons note paper stating he ‘had nothing to do with the disappearance of his wife’.

Mr McDonnell’s letter also claimed there were ‘no grounds’ for police to detain members of the Athwal family. He sent it to the Indian High Commissioner in London, asking for Indian jitauthorities ‘to ensure Mr Athwal’s family does not suffer’.

Sukhdave and mum Bachan wove a web of deceit to cover up the murder, even claiming she had run away with another man in India.

Surjit’s brother Jagdeesh led the campaign to find his sister – which eventually led to Sukhdave and Bachan being charged with murder in August 2006.

The key to unlocking the case was the testimony of Surjit’s sister-in-law Sarbjit Athwel, who told police Bachan had hatched the plot to kill. 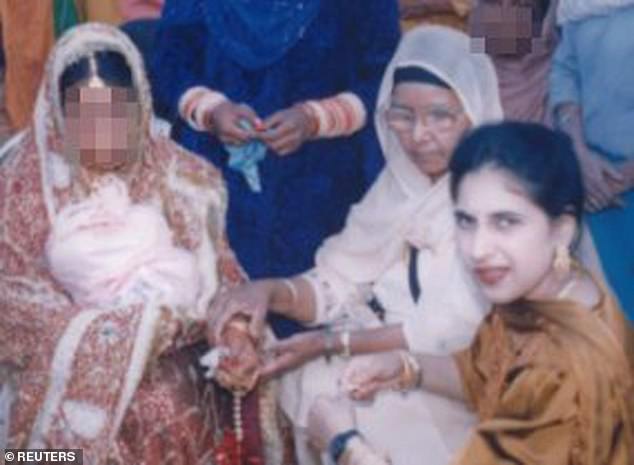 Bachan, now 85 and son Sukhdave Athwal were sentenced to life after being found guilty of the honour killing of Surjit Athwal, 27

Sarbjit, who is now divorced, told a newspaper in 2019 of her shock at being told of the plan in November 1998.

‘I’ll never forget the day I was summoned to tea,’ says Sarbjit, who was looking after Surjit’s two children while she was at work.

Bachan invited her into the front room.

‘In the middle of our tea Bachan says, ‘Surjit’s bringing shame on the family. It’s decided. We have to get rid of her.’

‘I was shocked, but thought she’s just angry. There’s no way she would be seriously suggesting murder. I thought, she’ll calm down, but Sukhdave — Surjit’s husband — was just sitting there and didn’t say anything.’

Justice was finally served and Bachan Athwal was sentenced to 20 years and Sukhdave, then 43, to 27 years, but these terms were later reduced at appeal to 15 and 20 years respectively.

The grey-haired widow, who has always protested her innocence, wept in the dock with her head bowed as she became one of the oldest women in Britain to be jailed for life in recent times.

Bachan shook her head as the judge told them: ‘How you could commit this unspeakable act I do not know. There was no motive worthy of the name. You did it because you perceived she had brought shame on the family name.

‘In reality you murdered her for no better reason than the existence of matrimonial difficulties and the likely breakdown of the marriage. You decided the so-called honour of your family name was worth more than the life of this young woman.’

Bachan took charge of Surjit’s young daughter, getting the girl to call her ‘mummy’, the court heard.

Sukhdave took out a £100,000 insurance policy on his wife the day she left for India but it was never paid out.

During the three-month trial the court heard the pair almost got away with the murder until they were turned in by Sarbjit.

The court was also told that Bachan had bragged to relatives that Surjit had been strangled by a male relative and thrown into the River Ravi in the Punjab.

At the conclusion of the trial, Surjit’s brother Jagdeesh Dhillon, said the verdict ‘brought the struggle and pain of the last nine years to a positive conclusion’.

He added: ‘This conviction sends out a powerful signal that this kind of cold, calculated, concealed murder will be seized and punished.’