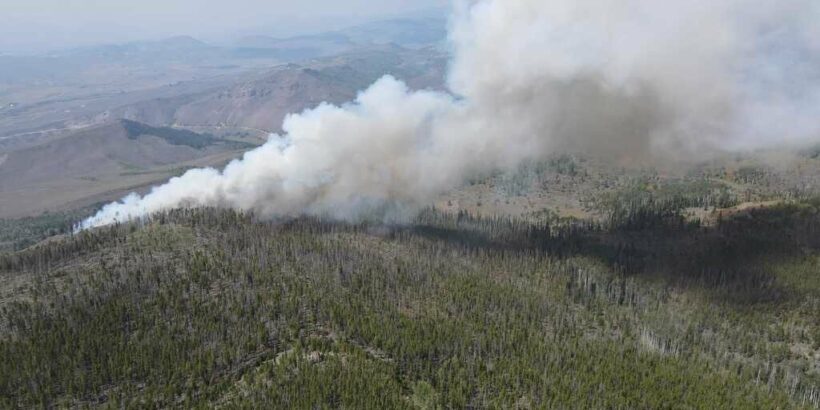 A wildfire in Grand County grew just slightly Monday and has not yet shown the explosive growth seen in past wildfires in the region.

The Black Mountain fire, which was reported at about 1 p.m. Sunday, grew from 120 acres to 170 acres Monday — burning across about a quarter of a square mile. The blaze is located off Grand County Road 2 in the hills northeast of Kremmling, just west of the burn scar from last year’s East Troublesome fire, which killed two people, forced widespread evacuations and burned more than 194,000 acres, about 303 square miles.

“So far we haven’t seen the huge, dynamic growth that has caused so much issue in past years, but there is certainly still danger with this,” said Aaron Voos, a public affairs specialist for Routt National Forest. “The fact that it’s 170 acres doesn’t mean it couldn’t grow or get larger quickly.”

He estimated 50 to 75 people were fighting the fire Monday. The blaze is not currently threatening any structures, but did prompt a pre-evacuation order for some parts of Grand County, with residents asked to be ready to leave at any time. Voos said crews expect the fire to burn into the evening and perhaps overnight, and that a cold front is expected to move into the area Tuesday and later into the week, which could bring moisture that aids firefighters.

“Today will be a key day, weather-wise, with the hot, dry temperatures and with the winds,” he said. “Once we get into tomorrow and the rest of the week we will see a cooling trend and hopefully some moisture.”

The fire is uncontained, and nearby residents who were impacted by the East Troublesome fire last year are on edge, Voos said.

“We are aware of that and working with the county to get out as much information as possible,” he said.