Grandfather, 64, reveals how his German pointer fought off dognappers by ‘knocking them over’ before thugs sprayed them both with ‘acid’

A grandfather has described how he and his pedigree dog were showered with corrosive liquid by robbers in a botched pet kidnapping.

Two men threw industrial cleaning fluid concealed in an Irn-Bru bottle at the 64-year-old as he walked his short-haired German pointer Alfie on Sunday morning.

Michael, a tiler who did not want his surname published amid fears he could be targeted again, said he could have been blinded had he not shielded his face as his body blistered ‘like hell’. 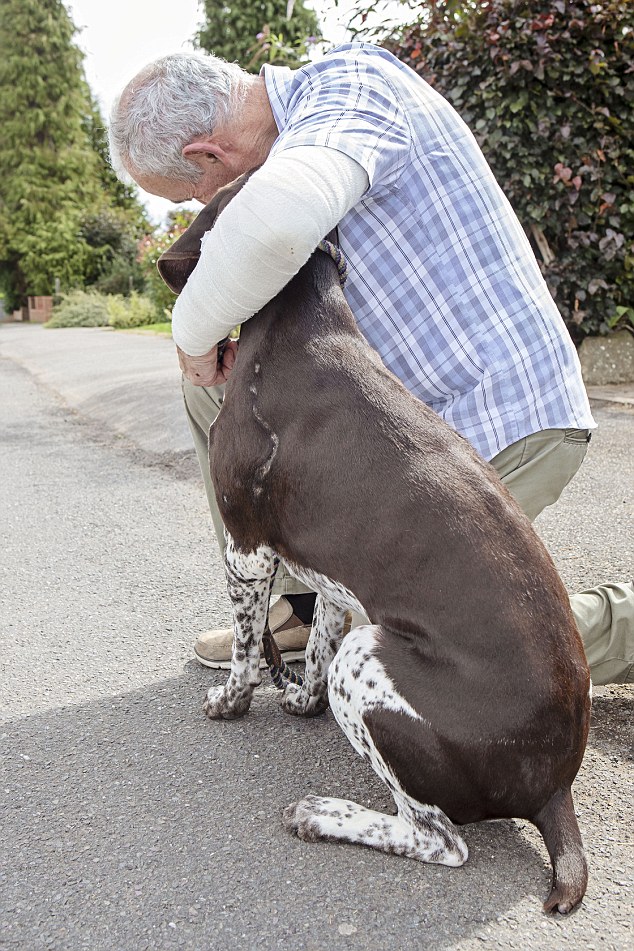 A grandfather, Michael, has described how he and his German pointer (pictured) were showered with corrosive liquid by robbers in a botched pet kidnapping

The dog managed to escape but suffered burns to his back – while Michael’s wife Gabrielle, 66, was last night awaiting surgery after having a heart attack shortly after the assault in Boughton Monchelsea, Kent.

Michael said: ‘The first man was big and fat, about 6ft 2in – he just grabbed Alfie by the collar and was wrestling with him. Alfie’s only ten months old but he’s a big strong dog, about 31kg [5st], and he managed to knock this guy over somehow, I think he tripped him. I was more concerned about the dog than anything else, so I went over to try and free him.’

It was at this point the second attacker ‘came out of the trees with the Irn-Bru bottle’.

Michael, who has three children and four grandchildren, added: ‘He sprayed me but I turned away just in time. It went all over my back, arm, some on my hands and a bit just below my left eye.

‘It burned like hell and started blistering straight away. I only had a T-shirt on and it ate straight through it. 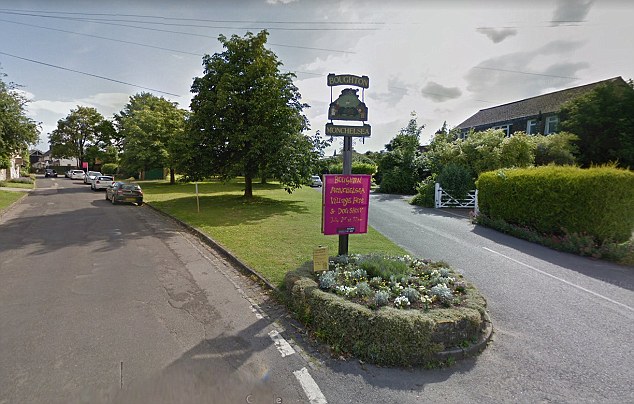 He was doused with corrosive liquid disguised in an Irn Bru bottle in Kent last Sunday between 7.30am and 8.30am (pictured, Monchelsea, Kent)

‘He came back and tried to throw more, but Alfie was between the two of us at this point so he was hit by the acid on his back so started yelping and screaming. Alfie wriggled free and ran right back to the house, which wasn’t far away. My wife found him outside.’

Michael, originally from Ireland, was also walking his other dog, Tia, who is eight-and-a-half and of the same breed, but he said the attackers had no interest in her.

‘There was no doubt that it was Alfie they wanted, whether it was for breeding or to sell or what,’ he said.

The robbers ran away and discarded the soft drink bottle, which was picked up for analysis. Michael then showered at a neighbour’s house before he was taken to Tunbridge Wells Hospital by the ‘fantastic’ emergency services and St John’s Ambulance. 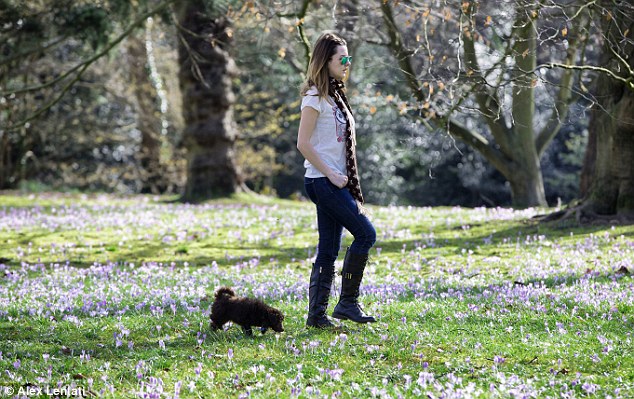 Dogs are increasingly being stolen, with nearly 2,000 snatched last year amid a soaring market for ‘designer’ pets (file photo)

Michael’s wife was driven by her son and daughter-in-law to meet him at hospital but fell ill on the journey and had to be admitted herself after suffering a heart attack.

Alfie’s grandfather Gus was a winner in the 2008 Breeders’ Stakes final at Crufts. Alfie has won a number of awards at local dog shows. Michael said: ‘The vet said Alfie should be OK but we don’t know how bad his scars will be so it’s unlikely he’ll be able to compete again. There are some horrible people out there. They have no respect for the law.’

Dogs are increasingly being stolen, with nearly 2,000 snatched last year amid a soaring market for ‘designer’ pets.

Police hunting the men said the first suspect was of large build, in his 40s and wearing a white shirt and jeans. The second is in his 30s and slim.