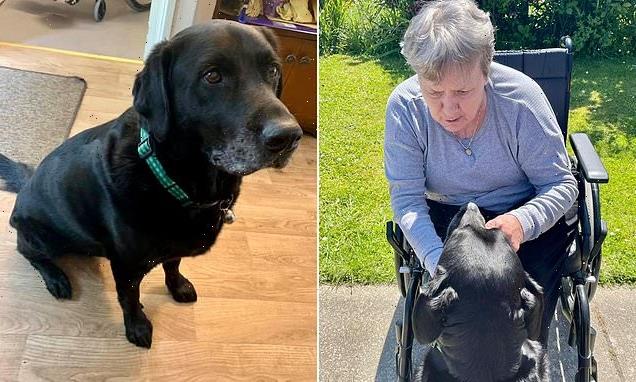 Blind wheelchair-bound grandmother, 80, has her guide dog of six years taken away from her ‘because it gained nearly 3lbs over lockdown’

A blind octogenarian is set to lose her beloved guide dog of six years after he gained some extra pounds over the coronavirus lockdown.

Wheelchair-bound Val McKenzie Smith, 80, has been told her ‘lovely’ Labrador-Retriever Hans is 2.8lbs (1.3kg) over his preferred weight and therefore has to retire.

The grandmother, from New Milton, Hants, who lost her sight at 17, said the charity which provided her with the pup will not let her keep him as a pet either.

But Guide Dogs says Hans’ case is ‘more than just a weight issue’ and that the black Lab has ‘ongoing problems’ with his joints.

Eight-year-old Hans is a Canine Partner assistant who Mrs Smith relies on for everyday tasks such as picking up things she drops, taking off her socks and jacket, opening the back door, collecting post and providing security as she lives alone.

His weight has crept up to 88.8lbs (40.3kg) in recent months as Mrs Smith’s daughter and dog walkers have been staying clear to allow the pensioner to isolate, meaning the dog hasn’t been getting as much exercise.

Hans is also suffering from a shoulder injury which requires a CT scan. 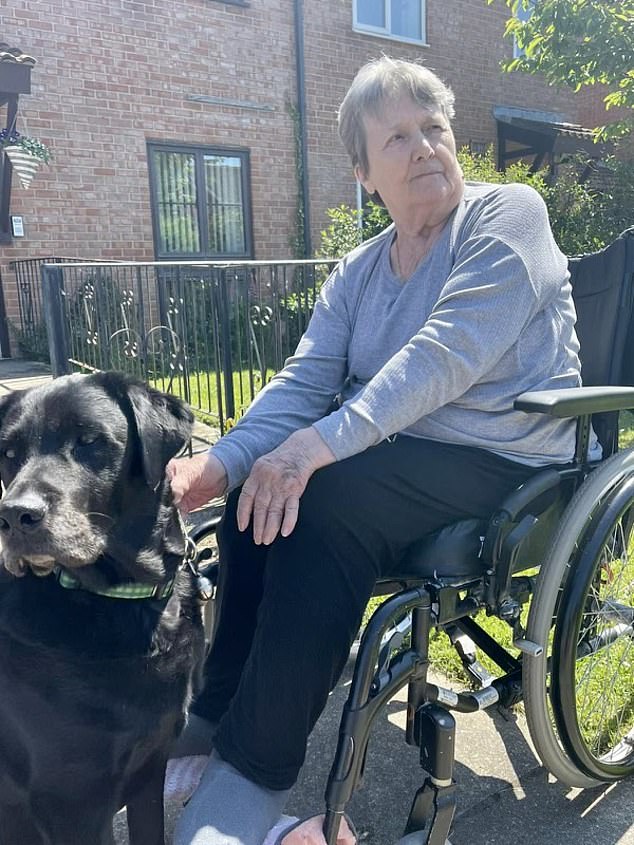 Val McKenzie Smith, 80, is fighting to keep her guide dog Hans as he is set to be retired following weight gain over lockdown 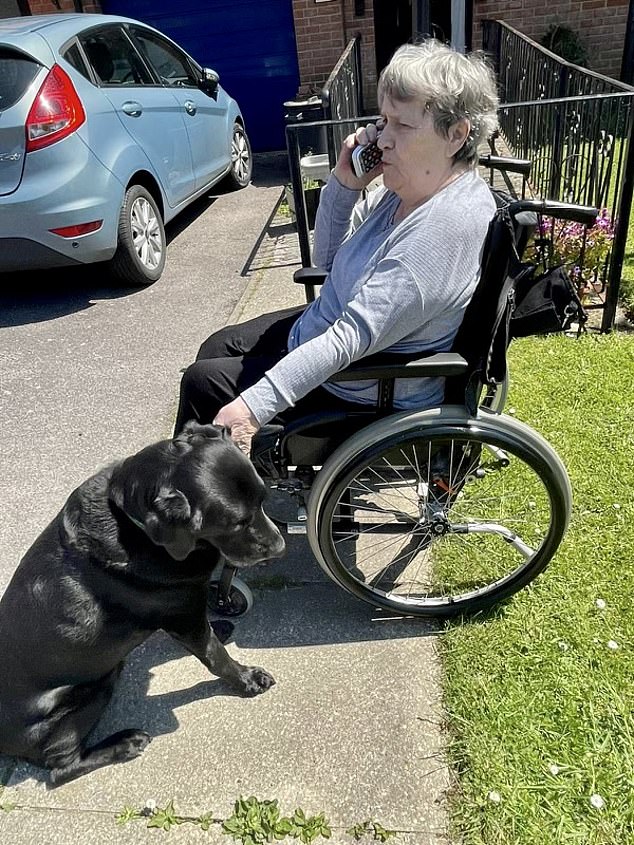 Val, from New Milton, has had Hans for six years and says she would be ‘completely lost without him’

A strict diet and recent walks have seen him get down to 85.5lbs (38.8kg) when weighed last week, but Guide Dogs, which caters for the visually-impaired, told Mrs Smith he is too heavy and that he is being retired and sent to a second top vet for a scan – with no hope of him being returned even as a pet.

Mrs Smith said: ‘I wouldn’t get him back even if they fix his shoulder, and even if I asked to keep him just as my own pet, which I have done with my last four guide dogs alongside a new one.

‘Neither organisation has said they’ll send me another dog, but they’ll have to get in my front door first to take Hans away, and he won’t go.

‘He’s my partner and I’d be lost completely without him. I think he’s lovely, and he thinks I’m lovely.

‘He’s my companion and he guides my electric wheelchair – like when I go to the shops – and I wouldn’t be able to go out alone without him.

What is the ideal weight for a Labrador?

Labradors fluctuate in weight throughout their growth and even adulthood.

However, it’s important that at each of these stages, they maintain an optimal weight according to their age.

So what’s the healthy weight for a Labrador?

The average male weighs between 60 and 80lbs while the average female is 55 to 75lbs.

These ranges are influenced by multiple factors, including age, gender, breed, and even activity levels.

If your Labrador falls within these ranges, then they’re most likely at a healthy weight.

But the best way to know whether your Labrador has a healthy weight or not is to get them checked by a vet.

‘If I drop the phone or anything I can’t see, he picks it up. He helps pull my socks off, he’ll pull one arm of my jacket and then go round the back to pull the other to help take it off.

‘I have balls tied to doors, so he pulls or pushes them shut – he’s very clever and I need him.’

Three months ago Hans started limping and a lump was discovered in his front right leg top joint, but the vet wasn’t sure of the problem and wanted a CT scan.

Hans could no longer be let off the lead when being walked because he forgets his injury and runs – setting off his limp.

But after Mrs Smith informed her local Guide Dogs office they phoned to say they would take Hans to a top vet in Winchester and that he was being retired and removed from her.

Mrs Smith added: ‘I expect he’ll go somewhere as a pet, but they won’t let me have him even as a pet and they don’t seem to even have any intention of giving me another dog either.

‘But they even got his injury wrong, saying it was because of the trouble with his back legs – but he’s got no other problems.

‘Years ago he had a back leg problem, but acupuncture sorted it.

‘They’re taking ages to arrange the scan to find the problem, and then they say he’s got a weight issue and accused me of working him as a Canine Partner when he’s injured.

‘But he hasn’t worked for 15 months because I had to shield, and I can’t do that anyway because I can’t get the harness on him because of his shoulder.

‘He can’t run either now if anyone walks him because of his shoulder.

‘All he’s been doing is pulling off socks and closing doors, which the vet said his fine.

‘He’s my fifth guide dog and I’ve had them 46 years so I know what I’m doing with dogs.

‘And he’s only put on weight because people were staying away while I isolated, so others couldn’t take him to run, and then my daughter broke her leg so she was restricted, and now he’s been injured.

‘But if you diet him too much he just scavenges because he’s hungry. 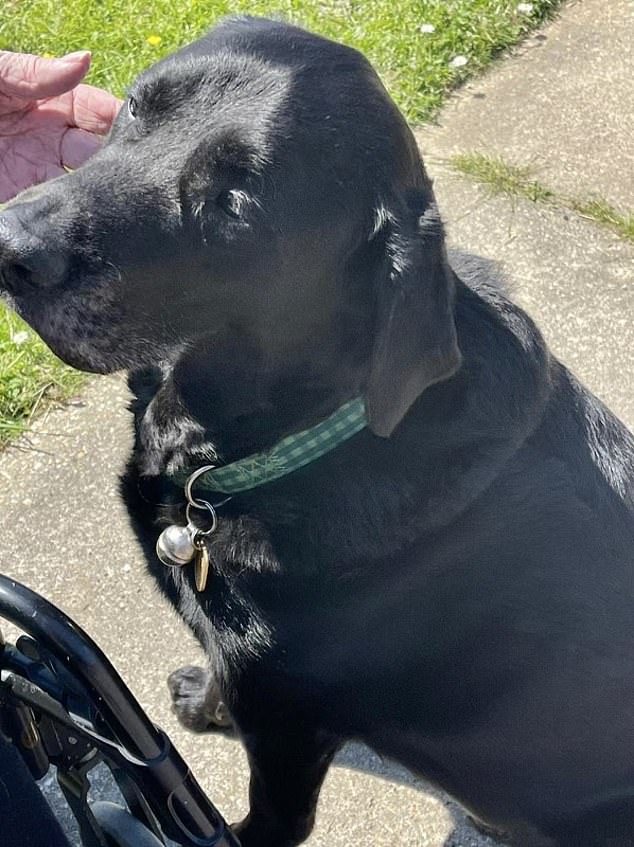 Val is going to be appealing the decision to retire Hans, which will see him re-homed with another family 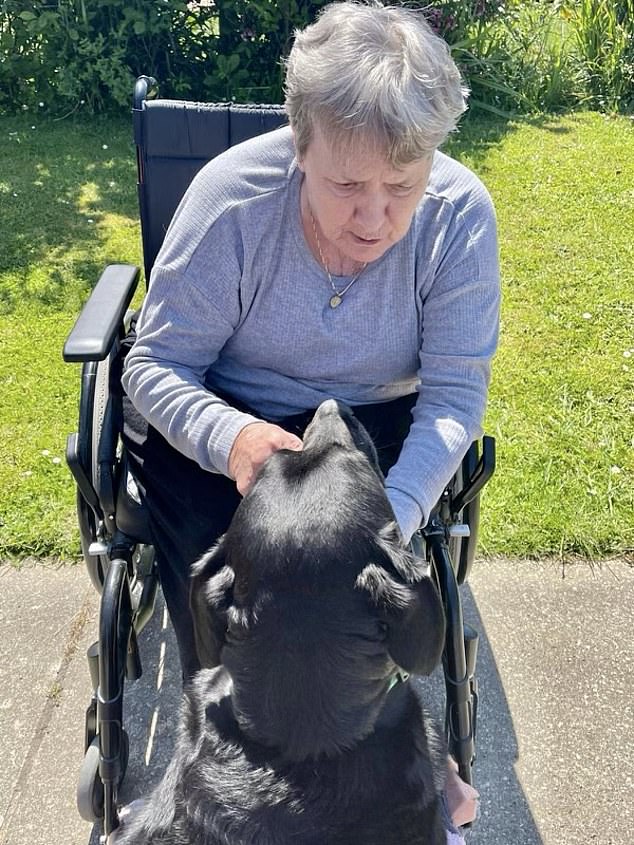 Val wants to be able to keep Hans as a pet if he is forced to retire, but the charity which provided the Labrador-Retriever cross has so far denied her request

‘When we did that he grabbed some bread someone put out for birds, and like when I recently dropped a croissant he scoffed that.

‘He could be a guide dog at least another two years and a Canine Partner service dog even longer, so if they won’t return him even if the vet sorts him out, it seems they are suddenly questioning my ability to look after a guide dog after 46 years with them.

‘Dogs mean so much, especially if you’re alone, and even more so a guide dog.

‘I was in shock when they phoned. Now I’m just cross and want to go to New Milton high street and scream.’

Mrs Smith first lost her sight at 17 due to Tuberculous Meningitis, although it did come back temporarily.

She is deaf in one ear, has arthritis in her hand, and cannot walk because of arachnoiditis, an inflammation of membranes that protect spinal chord nerves.

What are the rules for getting a guide dog?

One of the most important rules is that Guide dogs must be maintained at a healthy weight.

When a dog is overweight it limits their mobility and can significantly decrease their life span and cause secondary health issues like pancreatitis, diabetes, and arthritis.

Any visually impaired person wishing to qualify for a guide dog must also be willing and able to:

Guide Dogs wrote after the vet visit, calling their ‘optimum’ 82.6lbs (37.5kg), although previously they’ve never threatened to remove him when his weight has fluctuated over that.

Even when a previous year he hit 92.5lbs (42kg) they only said they might temporarily give him to a volunteer to exercise before returning him – but Mrs Smith was able to shift the weight off him before that.

She said she initially took the option of choosing her own vet is now keen for him to have a scan, and said she is happy for Hans to go to the Winchester vet, if he is returned.

Mrs Smith is going to appeal against losing him on Thursday and plans to weigh him again before then.

A Guide Dogs spokesperson told the Mail Online: ‘We appreciate how difficult this situation is for Mrs Mckenzie-Smith.

‘Removing a dog is not something we take lightly, however we have worked with Mrs McKenzie-Smith for a number of years to address Hans’ significant weight issues and the wider impact they have on his welfare.

‘Earlier this year we sought to get Hans to our expert vet to investigate his ongoing joint stiffness.

‘Regrettably, we weren’t given access to Hans to allow us to do this.

‘However he is now receiving pain relief treatment to ensure he is comfortable and he is undergoing further medical investigations.

‘The welfare of our dogs is paramount, and we need to ensure that their physical and mental wellbeing needs are being met.

‘But we also want to make absolutely sure we’re doing the right thing, so we set up an appeal process, which is open to all our guide dog owners, where an independent adjudicator can review our decision.’

It added that it has ‘acted under vets advice at all times’ and that ‘Hans is currently having further medical investigations and we’re awaiting the outcome’.

It also said that at the age of eight, the charity would usually begin talking to a dog’s owner about its retirement anyway.

It added: ‘As standard, when a guide dog retires, they are re-homed.

‘Canine Partners have supported the partnership over the years alongside the team at Guide Dogs and have been working with them to help resolve Hans’ significant weight issues and the wider impact they have on his welfare.

‘Canine Partners supports the Guide Dogs welfare review process to ensure the consideration of the welfare for both the dog and partner are taken into consideration.’