A time capsule containing items from a First World War veteran who died nearly 40 years ago has only just been reopened by his grandson.

Fred Deighton served in the Royal Army Medical Corps at the Somme and Passchendale but rarely spoke to his family about the horrors of war.

He left a box of letters, photographs and other wartime memorabilia from the war behind for his grandson Graham Underwood after he died in 1976 aged 86 – but the trunk was only opened three weeks ago. 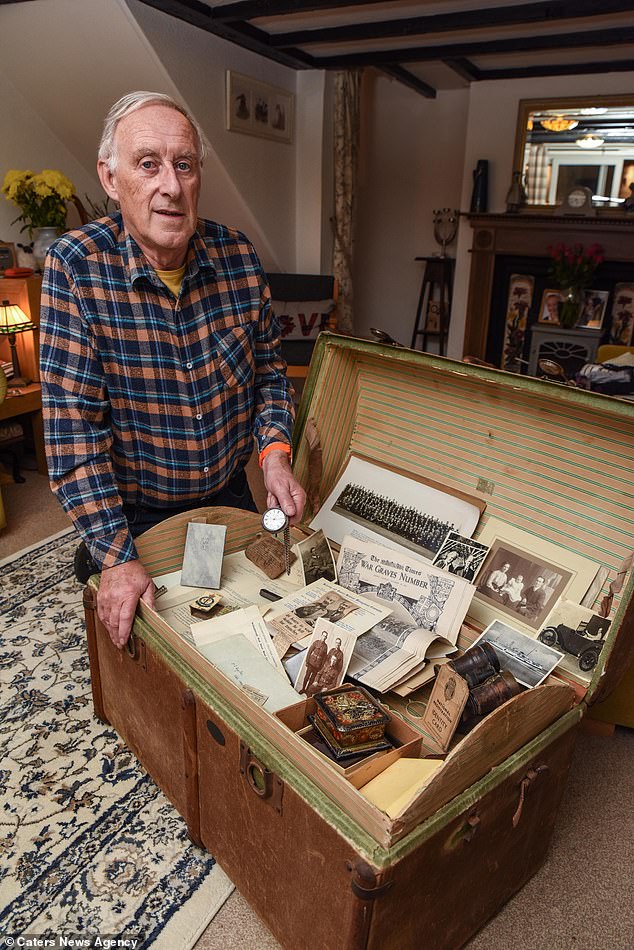 Graham Underwood, 71, recently opened his grandfather’s box of memorabilia which he collected during his time serving the Britain in the First World War 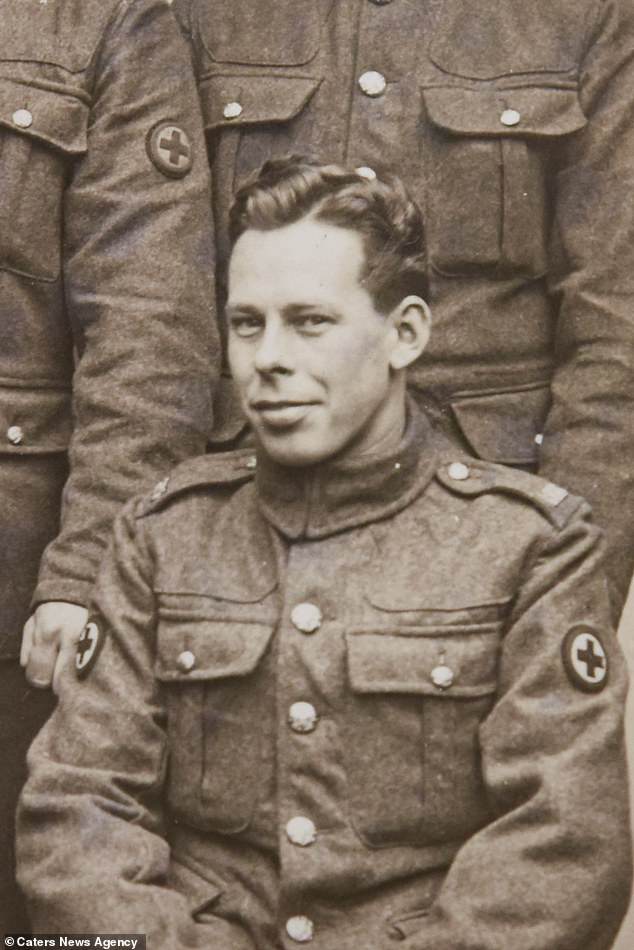 Mr Underwood, 71, from Wellingborough, said: ‘I knew there was stuff in there but never appreciated it’s significance.

‘He was a very important part of his life and we spent a lot of time with him. He was a funny, positive man.

‘Like so many men of his generation, he never talked about the war. He was in the trenches and was haunted by what he saw.’

Fred Deighton joined the army aged 22 in October 1915. He was wounded in action when he was shot in the head, but returned to serve in the trenches the next year.

Following the war, Deighton took a job at a local hospital and kept the trunk of war memorabilia for the rest of his life. 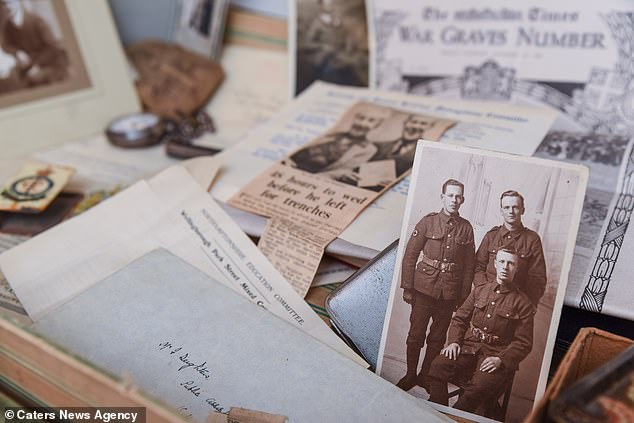 A chest full of memories of Fred Deighton (far left in soldier picture) who served as a medic in WWI. Fred kept his post cards, pictures, trinkets and other memories in a chest 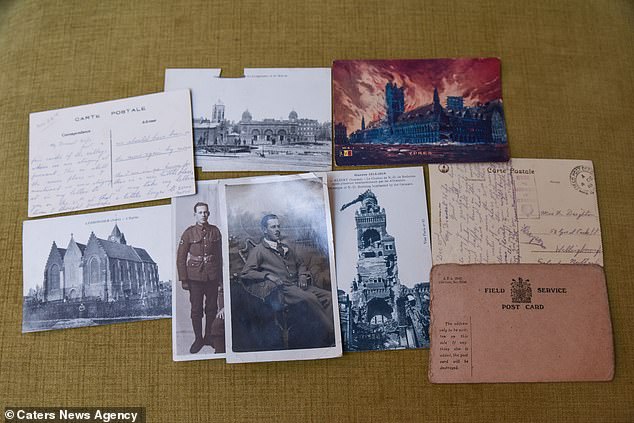 Post cards sent from Fred Deighton during his service as a medic during World War One, including 2 images of him from that period

Mr Underwood, a retired graphic designer, said: ‘Growing up, I never really noticed the trunk. It wasn’t ever opened when I was around.

‘After my grandfather died though I suddenly realised how important it was.’

The trunk, which was the only which Underwood took to Flanders in 1915, is full of mementos including bandages, uniform and notes used to treat his patients with in battle.

Also included was a watch, more than 100-years-old, which still works.

The trunk also contains cartoons drawn by an artist who served alongside Fred.

Graham said: ‘He fought with a cartoonist William Owen who designed the famous Bisto cartoon and I’ve got three of the cartoons he drew for my grandfather.

‘How you could go through what those guys were going through and still do that was amazing. 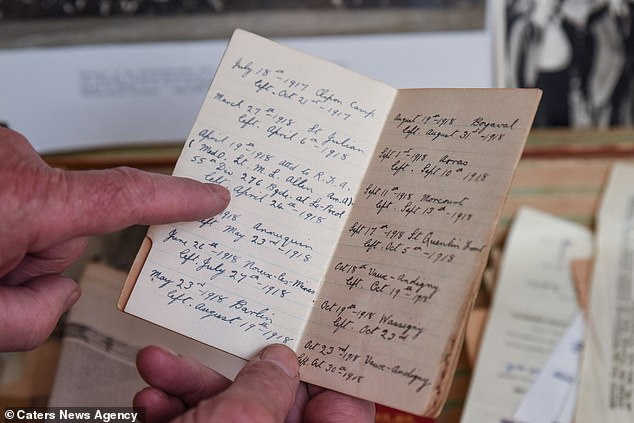 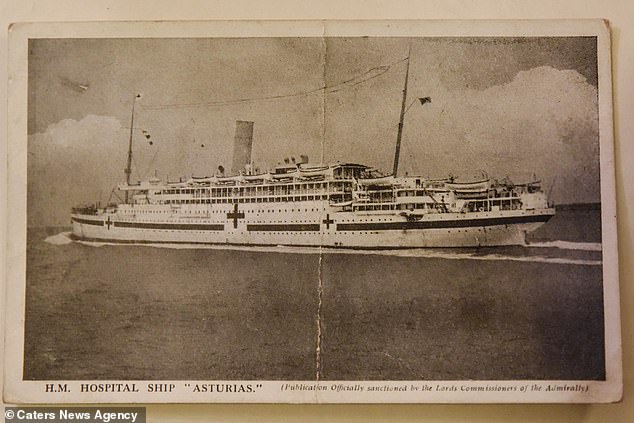 Fred Deighton was a medic in WWI, he survived a shot to the head during conflict, he returned on the H.M. Hospital Ship Asturias (pictured) where he wrote a message back to his mother and father 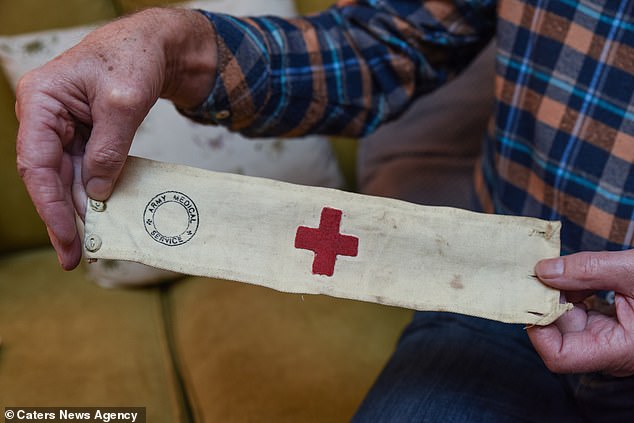 ‘The trunk is a snapshot of what life was like, hell on earth. It’s in pretty good condition despite being over 100 years old.

‘There are photos of his wife, good luck charms and a lot of medical stuff. I’ve also got tobacco tins.’

The trunk contains documents that detailed how Fred should treat casualties and reveals the shocking and gruesome reality of those injured during wartime.

The grandfather-of-three said: ‘There are forms here about what to do when people were shot but it’s all so matter of fact.

‘It shows how routine and normalised death was.’

‘I want the trunk to be passed down to my children so they can appreciate what he left behind.’ 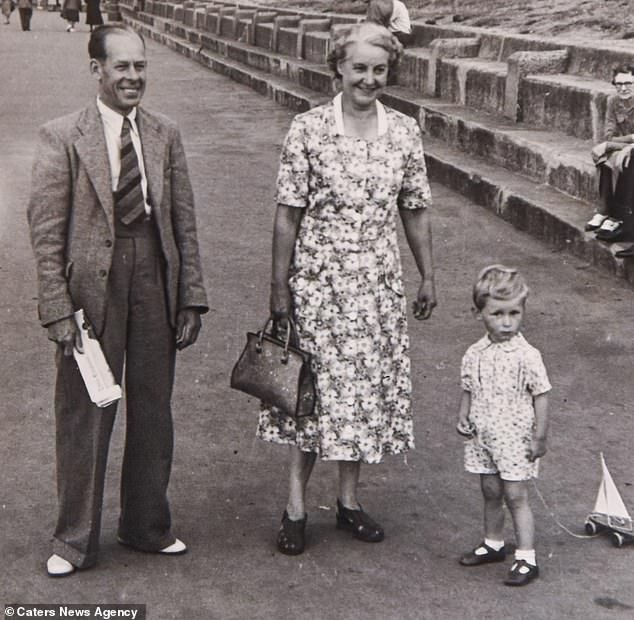 A picture of Fred Deighton, Fred’s wife Lillian, and Graham Underwood when he was a child 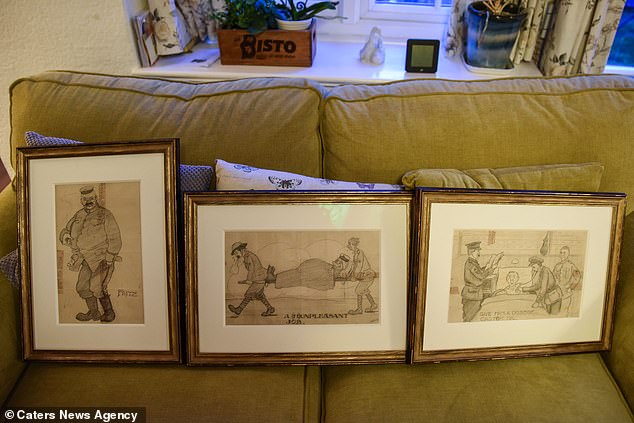 Drawings by renowned cartoonist, Will Owen were found rolled up inside the chest