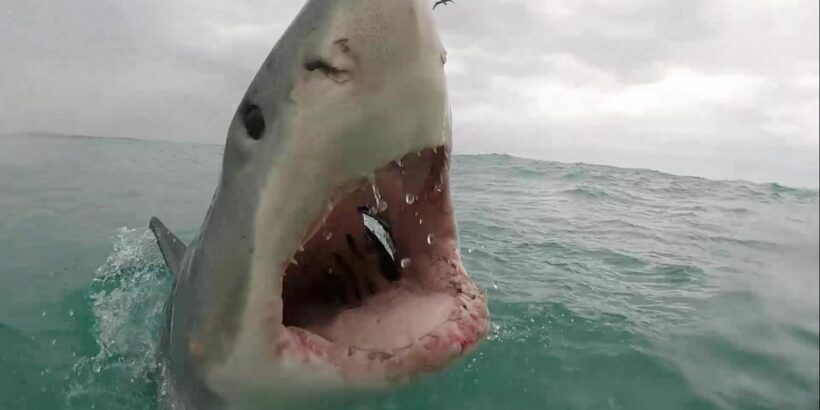 This is the heart-pounding real-life “Jaws” moment a great white shark breached the water bearing it’s teeth at a boat.

The dramatic video shows the apex predator leaping out of the water just like the hit Steven Spielberg movie.

It then continues to circle the boat and the cage of divers in Gansbaai, South Africa.

Anthony Kobrowisky, who has had many encounters with the apex predators, said this one from 2017 stands out above the rest.

Anthony, 35, who now lives in Oslo, Norway, worked as a cameraman on the white shark diving boat for three years.

Whenever one of the creatures was in the vicinity, he would “cautiously” follow the shark with his camera using a pole.

“The white sharks are generally very quick so you had to be ready all the time otherwise they would surprise you and be on the bait before I could get a video shot of the shark,” he said.

“My favourite aspect was that you never knew what you would see on the day. Every day was different.

“You never knew that would happen on each trip.”

But, while he admits the creatures “look incredibly dangerous”, Anthony said they are vital for the ocean’s eco-system.

“We need all sharks in our ocean and sadly many of these species are critically endangered,” he said.

“It is said that over 100 million sharks are killed yearly! This is primarily due to the shark fin industry and shark fin soup.

“The amount of sharks killed is not sustainable and will have a negative impact on all of our lives.”

It comes after terrifying footage emerged of a shark leaping out of the water and biting off part of a paraglider’s foot.

Meanwhile, the "luckiest guy in the world" survived a terrifying great white shark attack after one of the enormous beasts clamped down on his leg and left him with serious puncture wounds.